Gone are the days when games journalists were the first line of defence against ideologues looking to lay the blame for violence at the feet of popular entertainment in the wake of tragedies. These days, prudish games journalists do it themselves.

In the wake of the deadly Islamic attack on the Pulse gay dance club in Orlando, Florida, left-leaning games journalists and commentators took to Twitter to make arguments that sounded eerily similar to those advanced by “family values” crusaders like Jack Thompson little more than a decade ago.

Bob Chipman, also known as “moviebob,” who was let go from The Escapist after his political views became increasingly loopy, was quick to challenge games publishers at E3, the world’s largest video games expo, on its alleged glorification of firearms.

Like, yknow, if part of your hype reel is how many "real" firearms you can use and how "awesome" gunplay is? Maybe dial it back this year.

Jonathan McIntosh, an Israel-hating activist whose bizarre political pronouncements have generated an entire hashtag devoted to mocking him, drew a direct link between violent video games and gun violence.

I might still tweet about E3 but fair warning, today I’ve got no patience for video games that glorify guns, gun violence or gun culture.

We need to have a serious discussion about how video games that fetishize guns and glorify gun violence end up contributing to gun culture.

He went on to say that ending gun culture was an “imperative” for America, before rounding on “Islamophobic” gamers who suggested that maybe, just maybe, a very different sort of “culture” was to blame for the shootings.

What if ending gun culture and gun violence isn't a "personal hobby" but rather a social imperative for our country? https://t.co/A789TrG7Dm

I know you will all be completely and utterly shocked to find out that the reactionary gamers who hate stalk my feed are also islamophobes.

McIntosh’s solution? Men need to talk about their feelings. Oh, and smash the patriarchy.

Of course we also have to transform the wider culture of toxic masculinity so men aren't ashamed to talk about their vulnerable feelings.

Kyle Orland, senior gaming editor for Ars Technica, the man perhaps most responsible for gamers’ deep mistrust of games journalists, wondered if E3 would ban guns from their events.

But will EA drop the guns from its press conference? Should they? https://t.co/9MDnQu19Mt

Mike Diver, editor of Vice’s video games section, suggested that games without “qualified” appearances of guns should be “booed” at E3.

Let's make a deal to boo all games at E3 that feature real-world gun violence without any substantial qualifying of why it's there.

And Jonathan Blow, an independent games developer known for his progressives views said the games industry made it seem “cool” to be a mass-murderer.

The editor-at-large of Polygon, a Vox Media-run games site with a reputation for mad progressivism only slightly surpassed by Jonathan McIntosh, had the following to say: 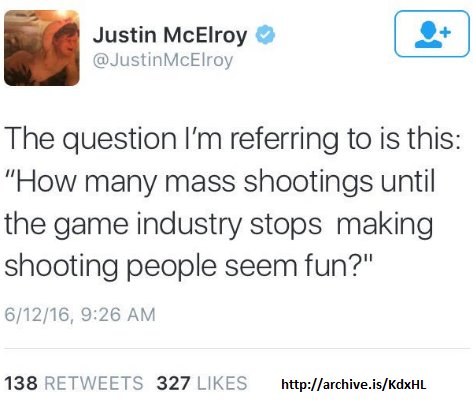 First-person shooters have been one of gaming’s most popular genres since their inception in the 1990s, and EA has promoted many shooters at previous E3 conferences. But moving forward with games that find the fun in gun violence, felt, at the theater, strange to say the least. It’s not just the uncomfortable collision of fantasy and reality — the dream world of violence in the auditorium, and the real world of violence outside it — it’s the uncanny monotony they share.

This is the first major press event at E3, a conference that has a reputation for celebrating graphic violence with an adolescent zeal. Throughout the week, we may see publishers of first-person shooters, and other violent games, respond to recent events. But what we really expect every year, like we saw at E3’s conference today, is a familiar, over-rehearsed routine that regurgitates the same ideas in slightly different configurations

That last line about E3 “regurgitating” popular formulas is key to understanding why joyless games journalists still hate their own industry, even after almost two years of gamers – their audience – telling them to change the record.

For years, games journalists have become increasingly elitist in their attitudes to popular tastes, and games publishers determinedly consumer-focused stance. This video, in which a left-wing games commentator breaks a copy of the smash-hit success Grand Theft Auto IV in front of a cheering audience of games journalists, is a perfect example.

Pseudo-intellectual attempts from feminist activists like Jonathan McIntosh and Anita Sarkeesian to link video games to real-world evils like sexism, racism, and violence are instinctively seized upon by a gaming press that still hates gamers, and still hates games.

And that’s the story of how the gaming press became Jack Thompson. Just as the old conservative lawyer pushed his agenda in the wake of tragedies, so too do left-leaning games commentators. Only the root of their agenda — snobbishness and boredom — is rather more petty.