While most Americans are waving flags, setting of fireworks, and generally having a good time, lefties on social media are using their constitutional right to free speech, fought for by the founding fathers and defended by every generation that followed, to try and ruin the fun.

The social media lefties, who if it weren’t for their PETA memberships would probably spend the day murdering bald eagles, spent the morning competing with each other to trash America in 140 characters. A lot of  it was about racism.

#AmericaWasNeverGreat it was founded on imperialism, genocide and slavery. Ppl from my continent came and stole the land, for that, im sorry

unless you were a white man #AmericaWasNeverGreat

Others went beyond racism. Apparently, despite pioneering gay rights, America is homophobic as well.

…And others were just hatin’

#AmericaWasNeverGreat because we refuse to accept and learn from the mistakes we made, instead we just cover them up with privilege.

As for this fellow, I don’t think he’ll be missed:

Happily, there were a few noble souls defending the values of patriotism, freedom, and fireworks from the miserable Fourth of July party-poopers. Just like 1776!

Hey people who think #Americawasnevergreat , You don't realize how lucky you are. pic.twitter.com/gtcNnEUn3t

It's your right to say #AmericaWasNeverGreat, but just know that you are shameful, undeserving of respect, and not a true American.

1920: Women get universal suffrage in America.

I think this one, though, has to be my favorite:

#AmericaWasNeverGreat Exactly. Who's coming with me to Mexico?

A final note. Although it is trending, #AmericaWasNeverGreat has so far failed to overtake “Happy 4th Of July” and #IndependenceDay in Twitter’s list of trending U.S. topics. Looks like freedom wins again, folks! 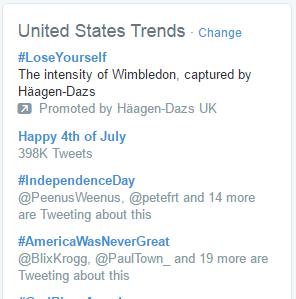