Dozens of Black Lives Matter and anti-police supporters, including an editor for ThinkProgress have taken to Twitter after the murder of three Baton Rouge police officers earlier today.

Zack Foster, an editor for ThinkProgress, said it was “no surprise” that some people were “taking justice into their own hands.” 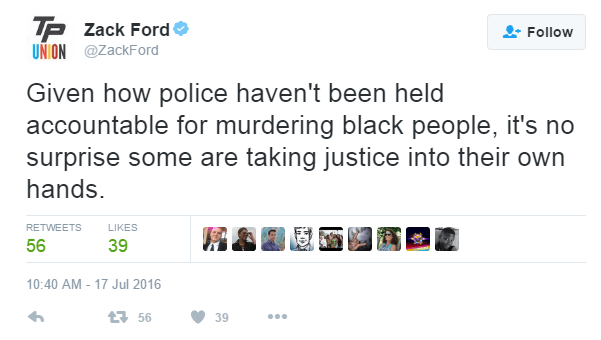 “DJ Niyo Davinci,” a DJ and producer who claims to have worked with high-profile rappers including Lil Wayne joked that he was “riding around Baton Rouge Wit A Big Pistol” and said that it “feels good to see N***as knocking these pigs off.”

“Sorry not sorry to hear about officers being shot in Baton Rouge. It was only a matter of time you pigs had it coming” posted one user on Twitter along with a series of pig emojis, before deleting the tweets after heavy backlash. “If police won’t get their shit together, civilians will continue to take matters into their own hands. Don’t blame em either. Fire away”.

“Loling at the fact that they shot the Baton Rouge police” posted another user. “That is the only police department that I know deserved it aside from dpd”.

Loling at the fact that they shot the Baton Rouge police. That is the only police department that I know deserved it aside from dpd

My thoughts on the recent police killings in #BatonRouge

Some users attempted to justify the shootings, claiming that the police officers “deserved” to be killed.

“This is what happens when you put people in a cage and poke at them for centuries” wrote one girl who received heavy backlash after tagging the #BatonRouge hashtag in her post.

“Not saying they deserved it, but the police in Baton Rouge certainly weren’t discouraging violence between protesters and police” posted another user, who used both the Black Lives Matter and a Deport Trump hashtags on his account.

Not saying they deserved it, but the police in Baton Rouge certainly weren't discouraging violence between protesters and police.

“fuck dem cops itll never be no justice when killing US is legal” wrote one user under the name of iSmokebroccoli, before deleting his post. “Alton Sterling still dead remember dat.”

Speaking of 12. They went in on the pigs in baton rouge. #blacklivesmatter

Some one just told me Three Pigs are dead! Is that True#BatonRouge

Black Lives Matter and anti-police supporters previously took to Twitter in celebration earlier this month after the shooting of more than ten police officers in Dallas, Texas.

“Put them pigs in a blanket” wrote one user along with the #Dallas hashtag and two emojis depicting a police officer with a gun to his head. “Aw it’s unfortunate it wasn’t more” posted another.

Despite Twitter’s policy against the promotion of violence, terrorism, and other illegal activities, the social network has failed to respond to many of the inflammatory tweets made by users on their platform, whilst prominent conservatives are both frequently and swiftly punished on the site for having the wrong political opinion.

Twitter CEO Jack Dorsey has been spotted with Black Lives Matter leader Deray Mckesson on numerous occasions, with the two recently even seen wearing the same Twitter “Stay Woke” t-shirts, furthering rumors that the pair might be in a romantic relationship.