A columnist who has written for both the Telegraph and the Guardian, Monisha Rajesh, deleted her Twitter account shortly after tweeting a call for the assassination of president-elect Donald Trump.

Following the election of Donald Trump this week, Rajesh posted multiple angry tweets to her now-deleted Twitter page, an archive of which can be seen here. The most notable, however, was one that Rajesh tweeted to Mark C. O’Flaherty, a photographer and travel writer who has also deleted his Twitter account, calling for “a presidential assassination.” 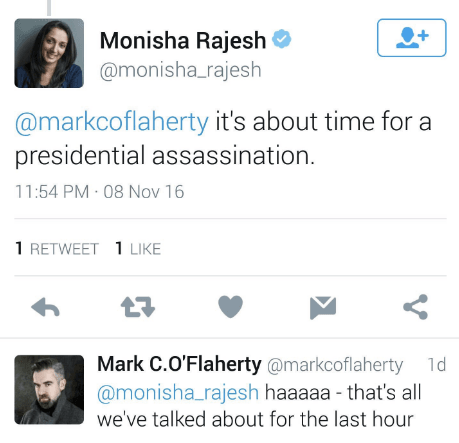 Speaking to The Guardian, a spokesperson told Breitbart News, “Monisha Rajesh is an infrequent freelance contributor, not a staff writer, and the Guardian cannot take responsibility for comments expressed by her in a personal capacity.”

Breitbart attempted to reach out to Rajesh for an explanation of her comments but received no reply.