It has long been suspected that the students who rail against “privilege” and “oppression” are themselves typically the pampered sons and daughters of wealthy elites. Now, a study from the Brookings Institution appears to prove it.

Controversies over the censorship and disinvitation of conservative speakers has reached epidemic proportions on American campuses. Earlier this month, a violent mob of leftists at Middlebury College derailed a talk by American Interprise Institute scholar Charles Murray, co-author of The Bell Curve. Professor Allison Stanger, who was injured and sent to hospital by the rioters, called the incident the “saddest day of her life.”

Earlier this year, rioters at the University of California, Berkeley, set buildings on fire, attacked passers-by, and smashed storefronts in order to disrupt the appearance of Milo Yiannopoulos on campus.

In the wake of the Middlebury riot, the Brookings Institution conducted a study on the type of colleges where the suppression of conservative speakers was most likely to occur. They found a clear correlation between censorship and wealthier colleges — in other words, its the rich kids who throw tantrums and clamp down on free speech. 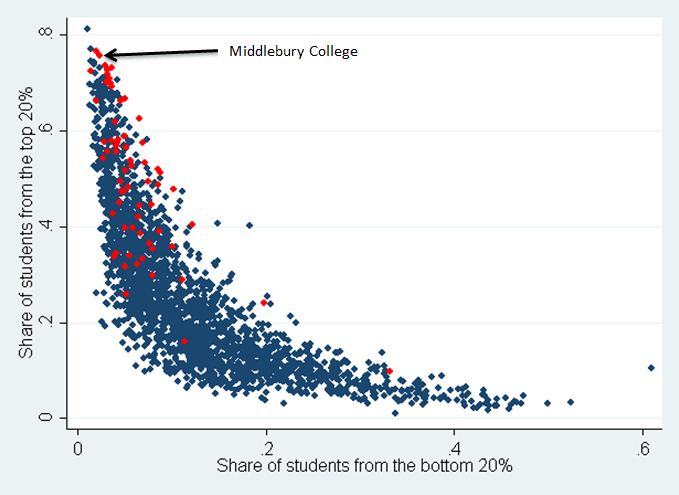 As the study authors note, Middlebury, the college where students censored Charles Murray, is near the top of the list:

Middlebury’s students are among the richest and most privileged in America. The average enrollee comes from a household making a quarter of a million dollars a year, according to recent research on universities and social mobility. As many students at Middlebury come from the top 1% of households (23%) as come from the bottom four quintiles (24%). The annual cost of attending is almost $64,000 a year.

This will not be surprising to those who have closely observed campus censorship over the past few years. 2015’s poster child for privilege denouncing privilege was Jonathan Butler, a Black Lives Matter-influenced protest leader at the University of Missouri, who successfully browbeat the President of the university into resignation after leading a massive protest at the college.

However, Butler himself was a scion of privilege. His father, Eric L. Butler, is a multi-millionaire rail executive who reportedly earned $8.4 million in 2014.

It later emerged that Butler had made blog posts low-income Subway workers. Yet during the Missouri protests, he cast himself as a champion of the oppressed.

Psychologist and intellectual diversity advocate Jonathan Haidt has described the culture of university censorship as one of “coddling,” in which students are encouraged to believe that they have a right to protect themselves from ideas and speech they consider hurtful or offensive.

It is not surprising, then, that those who have enjoyed some of the most coddled upbringings in the world would be at the forefront of campus censorship.