In the last century, few crafts have changed as radically as the visual arts. Painting and sculpture was transformed by a radical shift in style. Traditionalism and aestheticism disappeared, replaced by abstract expressionism and postmodernity. But this didn’t happen by accident, or even organically: it was, at least in part, the deliberate product of social engineering.

In 1947, the U.S. State Department organised an international modern art exhibition titled, “Advancing American Art.” The purpose was to disprove Soviet claims that America was culturally inferior. One such Soviet claim was the phrase, “Загнивающий запад” which meant, “rotting West” and was used to describe the moral and social decline of the United States in particular.

The State Department’s efforts achieved precisely the opposite effect to the one intended. “If that’s art, I’m a Hottentot,” declared President Harry S. Truman. One congressman publicly denounced the show: “I am just a dumb American who pays taxes for this kind of trash.” The tour was cancelled. Humiliated, the U.S. Government devised a plan; the State Department was kicked off the project and the CIA was brought in.

Under normal conditions the CIA is supposed to be responsible for obtaining information from internal and external threats and deliver them to the U.S. President and his cabinet. Apparently Truman’s administration felt either embarrassed enough, or considered this matter enough of a national security risk, to involve the agency. Now the goals were to promote modern and abstract art, in order to make America seem more sophisticated and cosmopolitan and to make the Soviets look out of touch.

Former CIA man Tom Braden described the process. “We would go to somebody in New York who was a well-known rich person and we would say, ‘We want to set up a foundation.’ We would tell him what we were trying to do and pledge him to secrecy, and he would say, ‘Of course I’ll do it,’ and then you would publish a letterhead and his name would be on it and there would be a foundation. It was really a pretty simple device.” This is how, for example, the now-defunct Farfield Foundation came to be.

The YouTube documentary Banishment of Beauty by Scott Burdick explains the the differences that have metastasised over the last few decades. It also tells the story of Springtime And Love, a painting in the Art Institute in Chicago which was a highly popular exhibit and fan favorite despite being created by an unknown artist. The painting has become emblematic of the ruling elites’ disdain for popular works of art and their estrangement from popular tastes.

The gallery banished Springtime And Love to a storage unit after it won a public poll. The Institute invested more money in modern art afterwards. Only after many years did they bring the painting out again, this time displaying it in a badly lit members-only library, where it still hangs even today. What was so offensive about the artwork that the museum thought they needed to protect the public from it, given its popularity?

It isn’t news that the general public doesn’t like modern art. The Daily Mail collected data about average and longest view times in 2011 and the results weren’t pretty. Traditional works like Ophelia by Sir John Everett Millais managed to occupy visitors for up to 30 minutes. Modern art pieces did not do so well: one of Damien Hirst’s was immediately disregarded by most and barely got any attention. 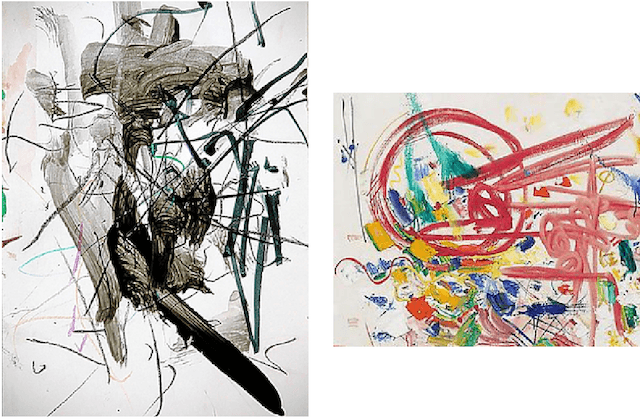 You can hardly blame the public for not taking modern art seriously. Look at the paintings above. One is a reproduction that sells for $600. The other is drawn by a 2 year-old-child. Can you tell the difference? Don’t feel bad if you can’t; neither can modern art critics. In fact, hoaxes are very common — to the point where critics can be, and have been, fooled by apes.

There are reasons for that. Traditional artwork has clearly-defined goals and techniques that deliver the most life-like and realistic results. Technical faults in proportion, anatomy, lighting, perspective and coloring snap viewers out of a painting and return them to reality. 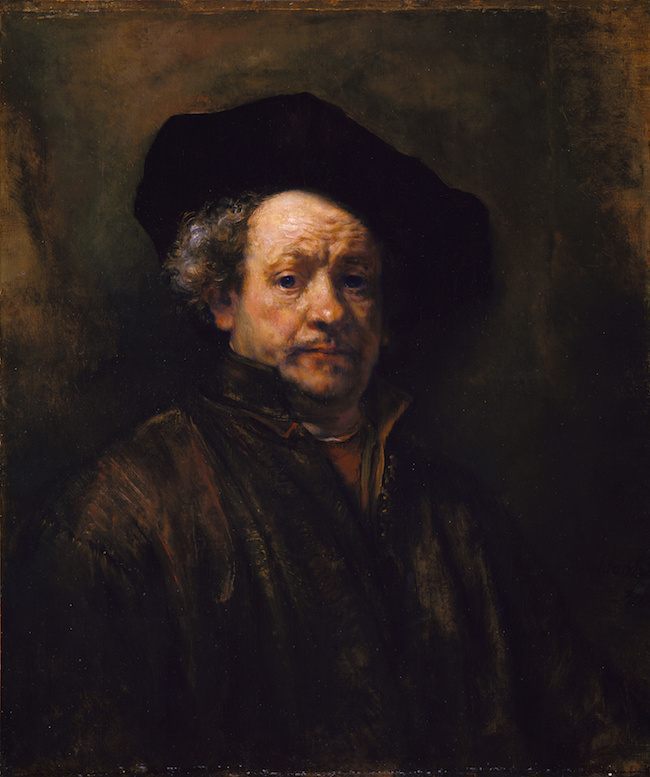 A self-portrait by Rembrandt

The same cannot be said for contemporary painting, which often seems so gratuitously talentless and ugly that its entire purpose might be to stick two fingers up to diligence, persistence, talent, skill and dedication. Audiences respond appropriately.

Intent, purpose and meaning are all disregarded today. Instead, modern artists indulge in stunts like blank canvases. The level of skill cannot be determined solely by reference to the paintings, as no techniques can be discerned, nor any sort of meaningful comparison between artists.

Museums and modern artists have opted to compensate for the extraordinary lack of skill and talent in the modern art marketplace by engaging in elaborate and fantastical descriptions of the mundane and trivial stuff  you see in the Tate and the Guggenheim.

The Guardian newspaper is especially good at this sort of garbage. Here’s one of its critics describing Barnett Newman’s Onement VI: “Meaning and dream collide hypnotically in his art. His vertical line, full of portent (but not “portentous”, as sceptics might claim) speaks of creation, God – and the human urge to draw a line. Yet this primeval mark slices through entrancing colour that draws you in at a deep psychic level, irrationally, like falling into deep water.”

It’s a blue canvas with a white line through the middle. 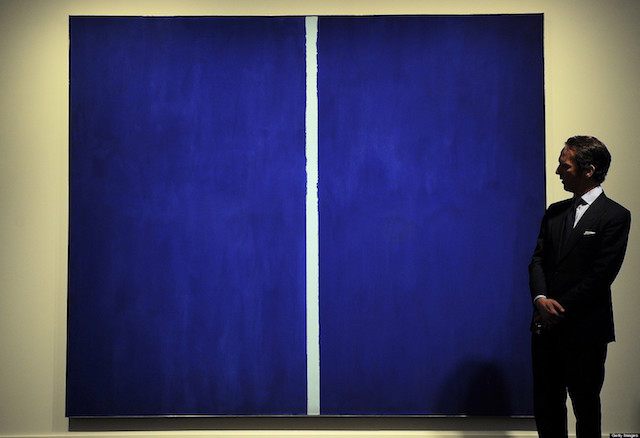 Audiences have observed this widening gap between how art is celebrated and described and what they see in front of them. The lack of representation, apparent non-existence of anything resembling technique and self-indulgent, almost comically absurd praise given to trashy attention-seekers continue to bewilder the public.

To garner more attention, negative or positive, artists keep trying to outdo their previous attempts to shock or disgust. Ugliness and stomach-churning acts of exhibitionism have become so commonplace they are almost boring. Feces, menstrual blood and used condoms are now standard features of the contemporary artist’s palette.

Marcel Duchamp famously kicked it all off, of course, by displaying a urinal. By now everyone knows about Tracy Emin, the British artist who showcased an unmade, messy, decrepit bed. Gilbert & George photographed themselves holding one another naked.

The skill required to produce one of these pieces is negligible, to the point that most respectable people find them dreary and predictable. Today, celebrity artists don’t even need to be physically present when “their” art is created: Damien Hirst uses assistants to create his spot paintings, putting his name on them and selling them all over the world for vast sums.

The consequences to the art market are ephemeral buzz and works which quickly gain and then lose their value. The market has become volatile and unpredictable, with artwork that has, in itself, little to no intrinsic value. The underworld has taken a particular liking to this essentially worthless commodity, using modern art to launder money.

Traditional artists laboured for the opposite kind of legacy. Dedicating their lives to learning and mastering one single skill to the point of obsession, trying to capture reality or beauty or express meaning. Their goal was to create masterpieces that would stand the test of time, often with little or no recognition.

Van Gogh supposedly cut his own ear off in a fit, after he was not able to paint it properly in a self-portrait. Michelangelo, painter of the ceiling of the Sistine Chapel, practically never showered or bathed, rarely changed clothes and hated speaking to people.These artists sacrificed normal lives to pursue one skill to the detriment of everything else in their lives.

Art education has changed completely to accommodate this new kind of art market, promoting new and modern approaches, with the result that Forbes has called fine arts the third-worst college major. The works produced by these graduates leaves nobody wondering why.

Universities can’t teach traditional art any more, because there is nobody left skilled enough to teach it. Classical drawing was rejected years ago; life drawings are not even on the curriculum at many formerly great schools. Worse yet, none of the teachers learned these subjects themselves, so would be unable to draw or teach if traditional techniques were put back on the syllabus.

It might take decades, or even centuries, to reconstruct the knowledge that has been lost in the West — assuming the art world will ever get tired of modern art. Proof, if further proof were needed, that social engineering by governments destroy everything they claim to defend.

Ironically, technology – which has enabled so much bad art – is probably the only way to save the discipline. Communities that trade, commission and sell art appear to have similar standards to the ones classical marketplaces did. Startups that help art lovers keep track of and share their favourite works discover that punters regularly name Old Masters as their favourite artists.

Technology has helped to drive a lot of pernicious change, making the lives of artists easier as programs and apps do most of the work. Damien Hirst, in particular, uses machines to create many of his pieces.

But there are technologies that have made art better, not worse. CGI, animation and drawing all benefit from advancing technological progress and make new and better visuals possible, sometimes with similar goals as traditional artists.

And there is reason to suppose, too, that the disruption of higher education by technology might give students access to skills and techniques from history. Universities are crumbling as liberal arts courses in particular become more of a joke than a serious qualification.

The rise of internet-enabled courses, drawing on vast reserves of ancient techniques, with full libraries of masterpieces, might well trigger a second renaissance among young people with creative talent. The ossified and self-regarding Establishment is becoming irrelevant.