Recently leaked internal memos outlining Facebook’s guidelines for removing content have provided unique insight into what is permissible and what is forbidden on the social media platform.

The Guardian reportedly gained access to Facebook’s internal memos, reviewing more than “100 internal training manuals, spreadsheets, and flowcharts” that apparently outline the social media platform’s rules for removing “hate speech.” disturbing imagery, sexual imagery, credible threats and a multitude of other categories of unacceptable content. So here are the six most important things we have learned from these internal memos.

According to The Guardian, many of Facebook’s moderators are required to review a huge number of reports daily with some moderators judging millions of reports on a regular basis. This means that time is of the essence to process a massive volume of data on a daily basis.

This has reportedly lead to moderators being forced to make challenging decisions on whether or not to delete content in very little time. The moderators often have “just 10 seconds” to make a decision on whether or not to remove to allow certain content on Facebook. One source said, “Facebook cannot keep control of its content. It has grown too big, too quickly.”

2: Many Moderators Are Confused by Facebook’s Guidelines, Particularly Relating to Sexual Imagery 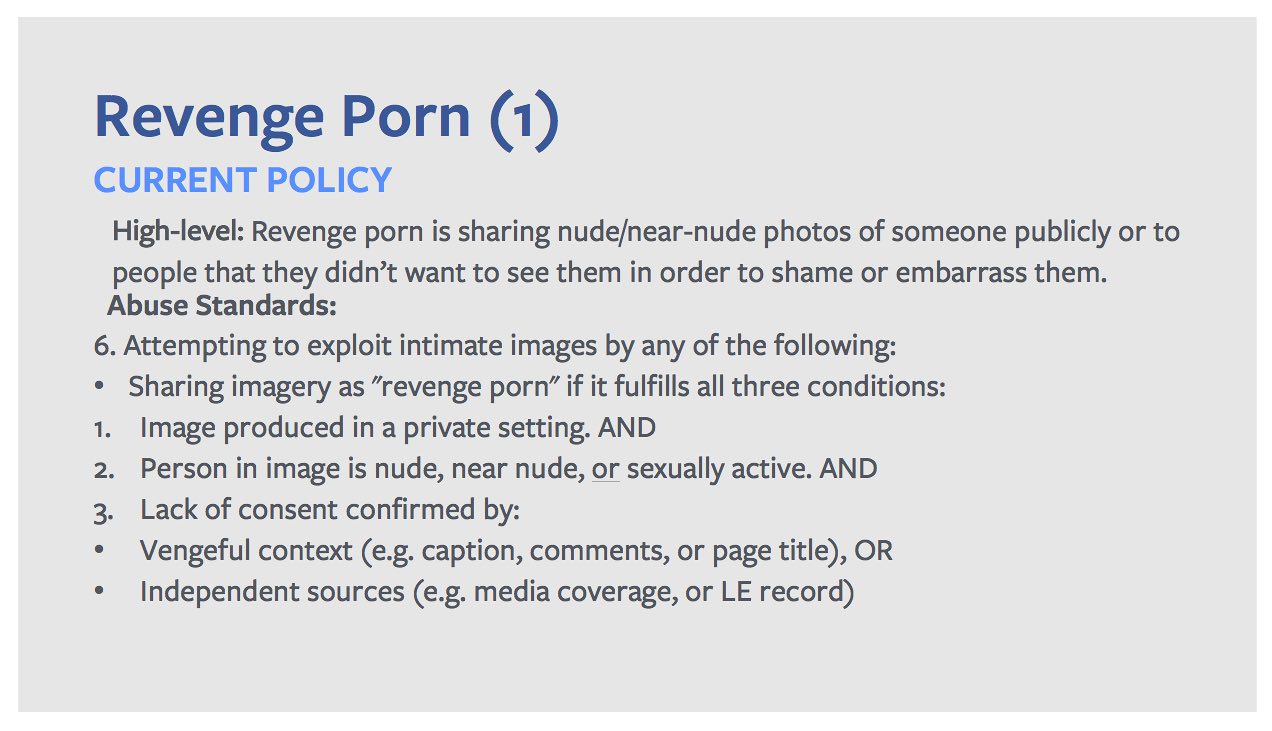 3: Threats Against Public Figures, such as President Trump, Are Banned from Facebook

What may shock many readers is that Facebook specifically states that threats against public figures, such as President Trump, are explicitly banned by Facebook. The social media company very openly states that threats such as “someone shoot Trump,” should be actively deleted by moderators, however, a cursory glance across many anti-Trump Facebook pages will display a number of similar threats left untouched by the Facebook moderation team.

While Facebook bans direct threats against a protected class or an individual, general disturbing comments such as “To snap a bitch’s neck, make sure to apply all your pressure to the middle of her throat” are apparently acceptable. In one of the leaked memos, Facebook states that “people use violent language to express frustration online” and feel “safe to do so” on the site. It goes on to say, “They feel that the issue won’t come back to them and they feel indifferent towards the person they are making the threats about because of the lack of empathy created by communication via devices as opposed to face to face.” 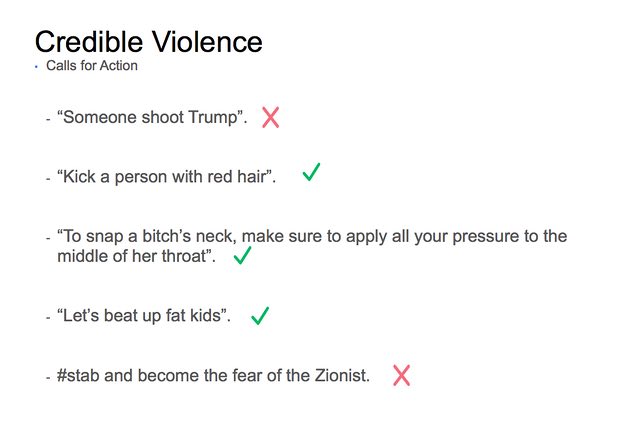 4: Videos of Suicide or Death Do Not Have to Be Deleted

However, Facebook’s official policy on these videos is not to automatically delete all of them. Videos, where death and violence are celebrated, are to be deleted, but it is acceptable to leave these videos on the platform if “they can help create awareness of issues such as mental illness.” Videos of self-harm are also permitted as Facebook “doesn’t want to censor or punish people in distress.” Videos of death are deleted if people in the video or comments are celebrating that death. 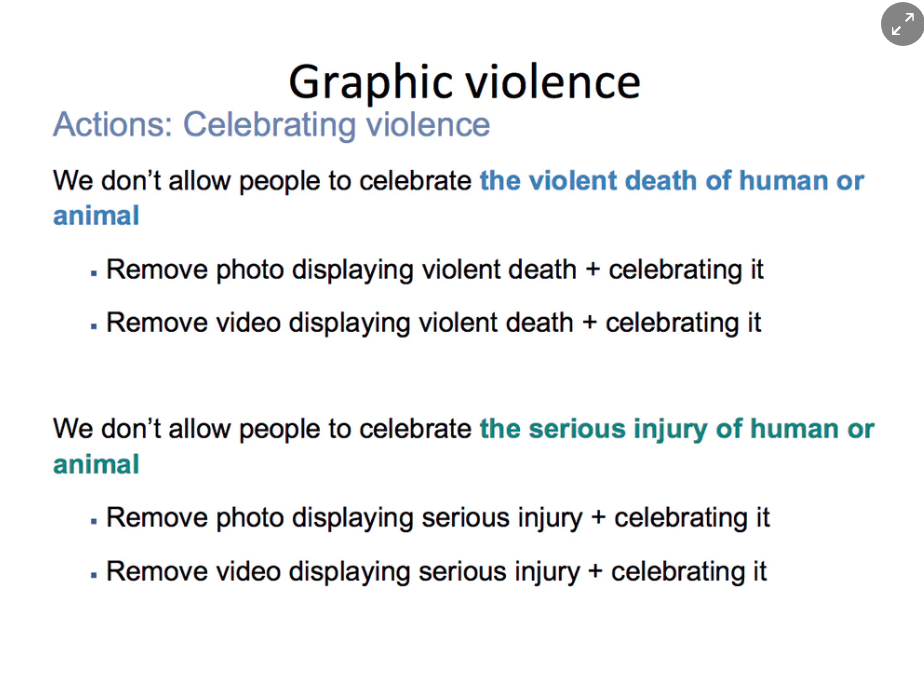 5: Videos Of Abortions Are Fine – As Long As There is No Nudity

In one of the most bizarre rules that Facebook moderators must follow, video footage of actual abortion procedures is reportedly totally acceptable – once no nudity is shown. Under Facebook’s “Graphic Violence” guidelines, the definition of “violent death” includes humans dying in accidents, murders or suicides. What is not included in this are videos of fetuses.

The outline slides reads, “Videos of abortion only violate if they contain nudity.” A picture of the slide can be seen below: 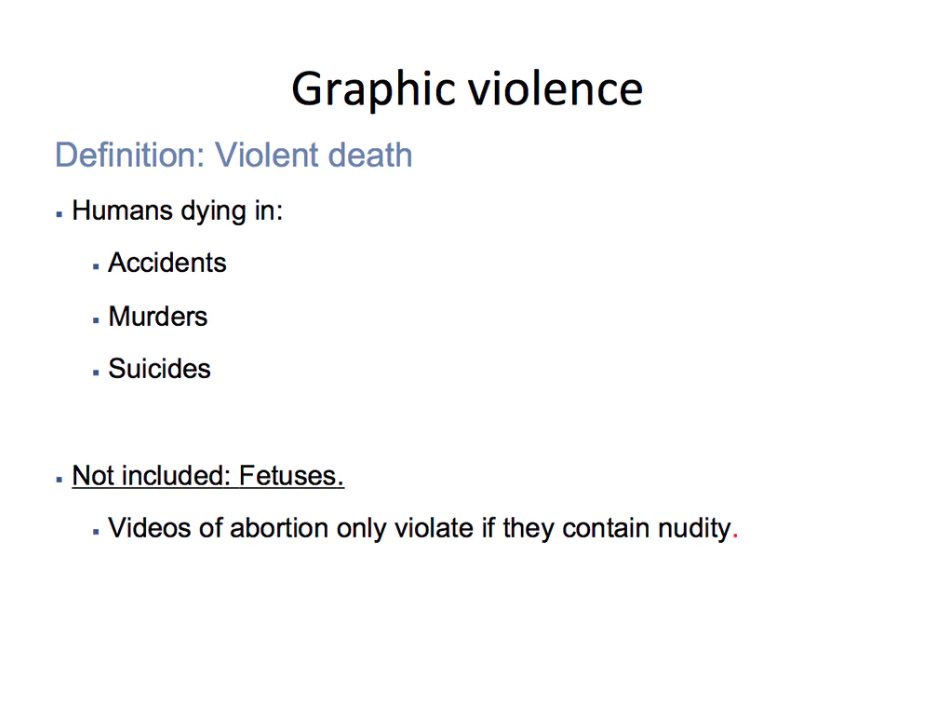 6: Videos of Animal Abuse Are Permitted 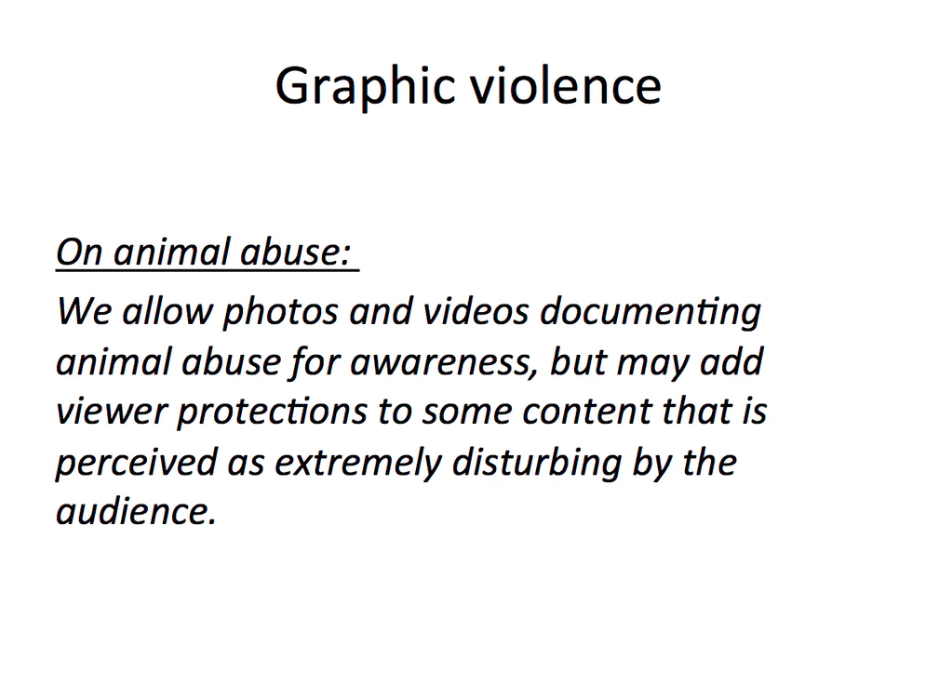 Overall, these guidelines provide an interesting insight into what is deemed acceptable by Facebook, the context in which content is deleted, and how the company may moderate their platform in the future. As Facebook grows larger and slowly becomes the arbiter of truth in many situations, it is important to understand how Facebook defines what is published on their website to hold them accountable when these rules are broken.