“#CNNBlackMail” rose to the top of Twitter’s trending hashtags after the network threatened to reveal the identity of a Reddit user alleged to have created an animated image mocking CNN, which was recently tweeted by President Trump.

In an article which led CNN’s website on the evening of the 4th of July, the network stated that the user had apologized for “the video and other offensive content he posted — one day after CNN identified the man behind the account and attempted to make contact with him.”

In the article, CNN promised not to reveal the user’s name … for now. However, the network made it clear that this was only because “he is a private citizen who has issued an extensive statement of apology, showed his remorse by saying he has taken down all his offending posts and because he said he is not going to repeat this ugly behavior on social media again.”

Furthermore, CNN said the network “reserves the right to publish his identity should any of that change.”

As a result, CNN is now being accused of blackmail from multiple quarters on social media, as #CNNBlackMail became the top trend in the United States. 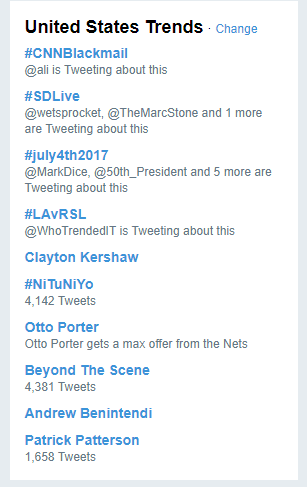 A multi-billion dollar TV network blackmailing a private citizen into not making funny videos about it is not journalism, CNN. #CNNBlackmail

Is that normal? Is @CNN essentially threatening to dox him, or am I reading that wrong? pic.twitter.com/7LMMqo1fK5

If you think the Reddit guy's name is newsworthy, publish it. If it's not, don't.

If CNN’s objective was to stem the tide of gifs and memes ridiculing the network, it has backfired spectacularly, with the #CNNBlackmail hashtag dominated by mockery.