Back in the day, this would have been a cause for celebration, not dismay. Why? Because within milliseconds of their fatuous utterance tainting the ether with its embittered, warped, politically correct insanity it would have been endorsed – and simultaneously destroyed – by the mighty Godfrey Elfwick.

Godfrey Elfwick was the funniest and best thing on Twitter. 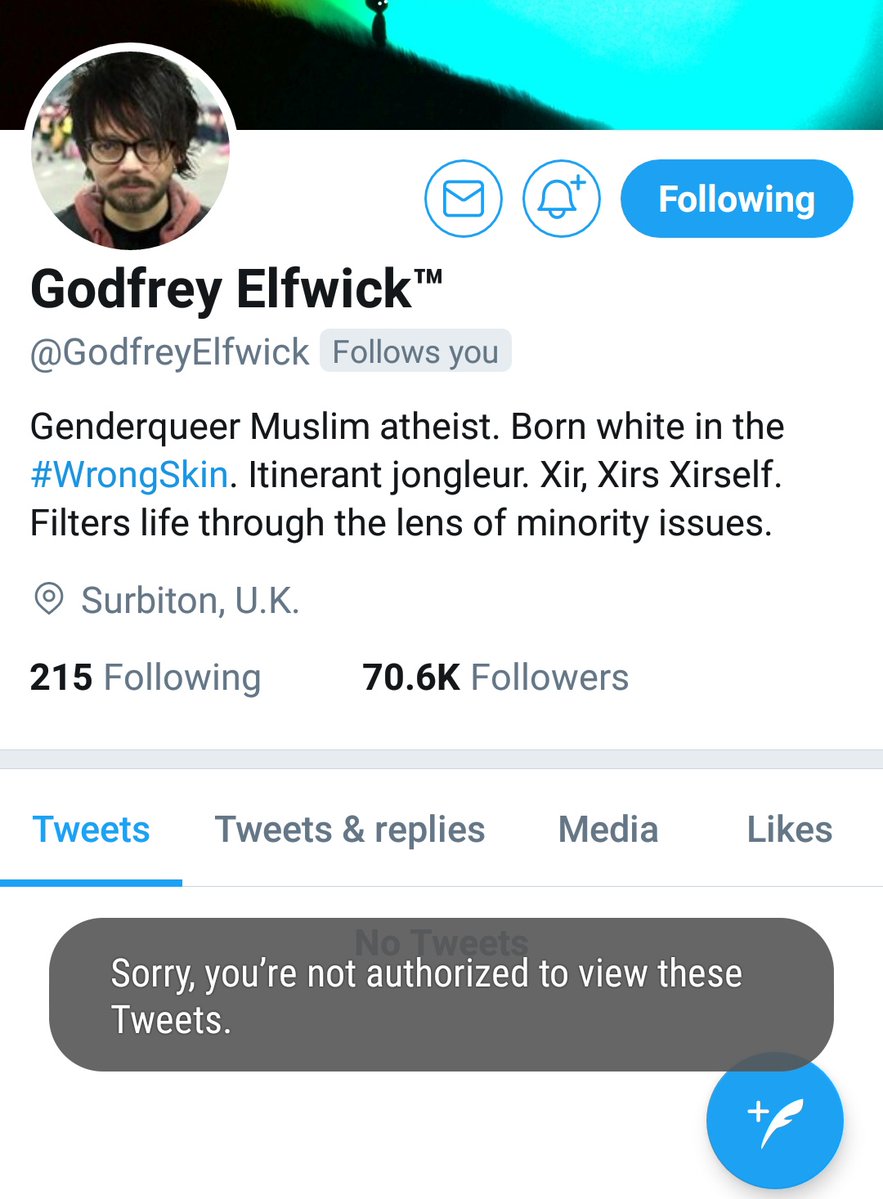 To have your tweet singled out for praise by Godfrey was the kiss of death. It meant that you were a humorless, self-righteous, deluded, smug, sanctimonious, insufferable Social Justice Warrior. Just like Godfrey purported to be.

Which is why, of course, Twitter had to silence him. Sure, the official reason given for Godfrey’s permanent ban was because he had broken Twitter’s terms of service – apparently having upset a millionaire potato chip salesman called Gary Lineker. 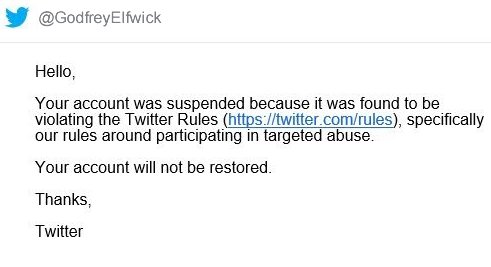 But the real reason, as we all know, is that Godfrey Elfwick did the thing the totalitarian cry bullies of the liberal-left fear even more than facts and reasoned argument: he ridiculed them.

It is a truth universally acknowledged by anyone who has spent more than a moment glancing at social media that SJWs can’t do jokes. Or banter. Or memes. Given that social media is mostly about jokes, banter, and memes, this means that SJWs spend their every moment on the internet in a state of near-impotent pique. They cannot strike back with wit or charm or facts or evidence or amusing images of Pepe the frog, for these are all things they singularly lack. So every time they are forced to resort to the only weapon in their armory: censorship.

The reason they can do the censorship thing is because, by unhappy accident, most of the dominant tech sites – not just Twitter, Facebook, and Google but also ones like Patreon which recently cancelled Lauren Southern’s account because she’d committed the crime of being a conservative – are run by liberals who want the whole world to think and act like liberals.

This explains their appalling double standards.

In the case of Twitter, for example, anyone on the right who tried to belittle someone with an offensive racial epithet would undoubtedly be punished with an instant and permanent ban.

But when Black-Lives-Matter-endorsing rapper Talib Kweli branded Breitbart’s Jerome Hudson a “coon” for the crime of being black and conservative, no action was taken by Twitter against the rapper.

Nor did Twitter take any action when Gary Lineker directed his 6.2 million followers’ petulant rage towards Nigel Farage.

I was wrong when I called Farage a dick and I apologise. He's a lot worse than that.

Yes, I’m sure Farage can take it. I know he’s had it a lot worse. And personally – as I’m sure Farage would agree – I don’t think that this sort of language should be censured or censored on Twitter. But if you are going to invent snowflake-protecting, safe-space-creating rules on “targeted abuse” then at least show some consistency. Now (and I’m quite sure, forever) Twitter’s approach to banning is so ludicrously one-sided that it would almost be funny if it weren’t so oppressive, hypocritical, and unjust: conservatives like Milo get banned; liberals (and violent Islamists, and Antifa thugs, and screeching feminists) are free to spew their bile for all eternity.

Now Twitter has claimed another conservative scalp in the form of Godfrey Elfwick.

Zir Twitter handle may be dead, but Zir memory lives on: 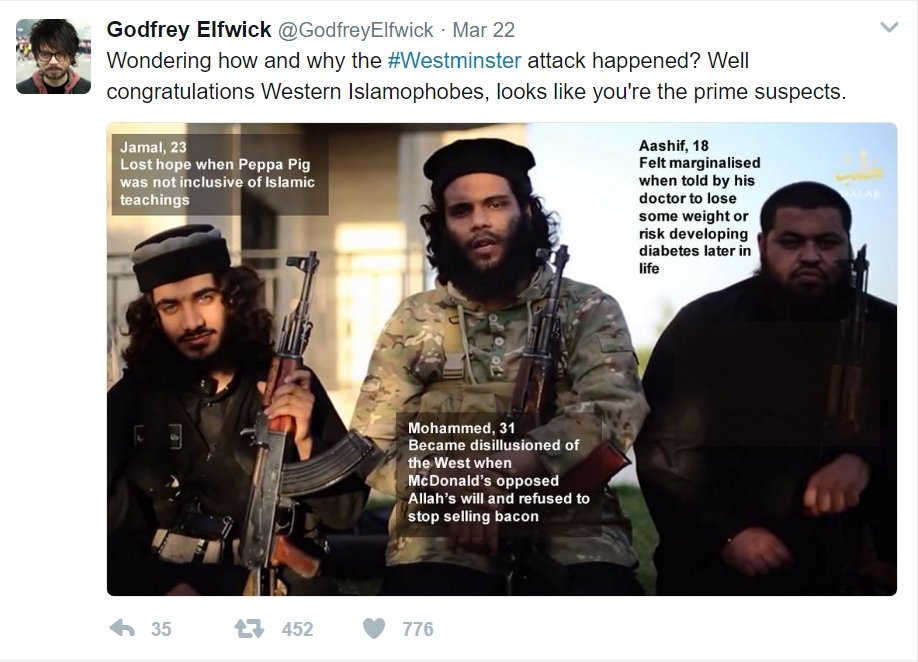 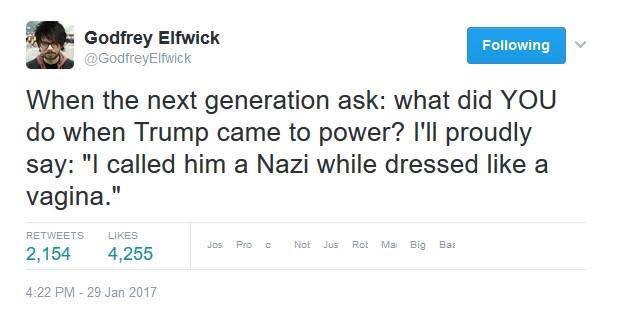 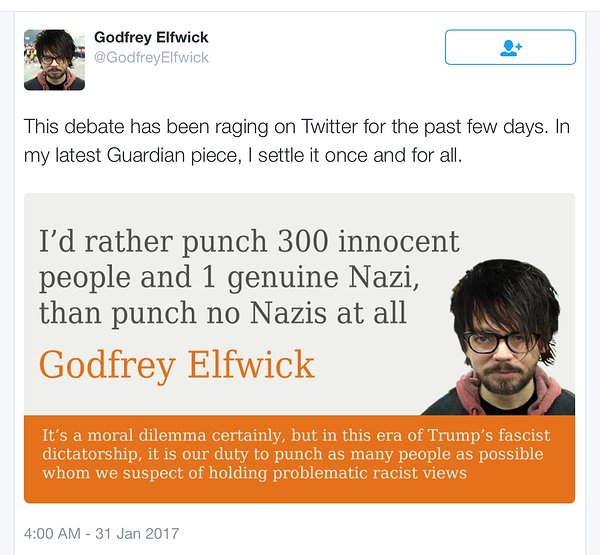 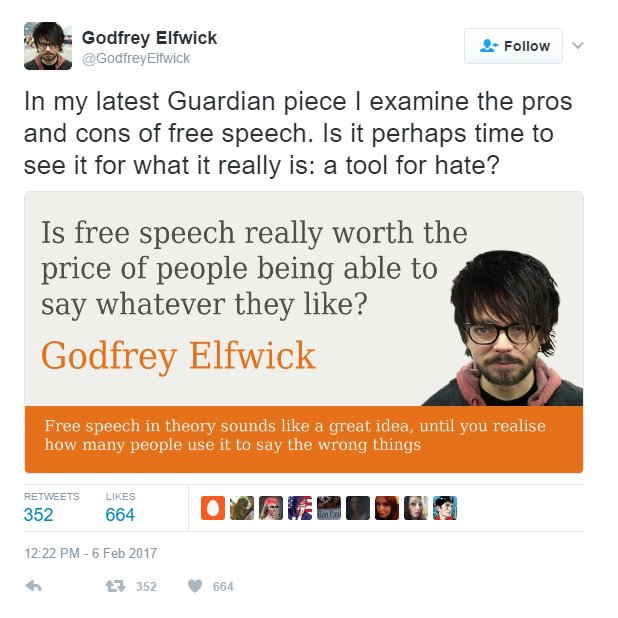 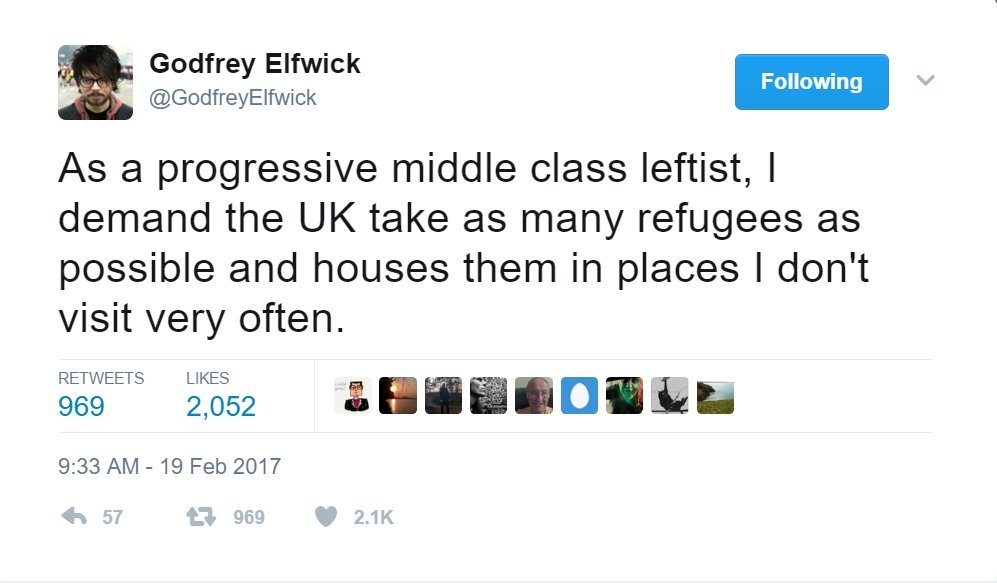