Left-wing backlash against the Google employee who published a manifesto calling for more ideological tolerance at the company intensified this evening, as SJWs inside and outside Google sought to contain political dissent at the company.

The Googler’s 10-page manifesto criticized the company for maintaining an atmosphere of political groupthink, in which employees with viewpoints that challenge leftist narratives are forced to keep their mouths shut for fear of losing their jobs. He also criticized Google for ignoring the latest research on gender differences and their interplay with the lack of women in STEM jobs.

The allegations of political intolerance come shortly after YouTube, a Google-owned platform, announced they would manipulate search results, artificially promote socially progressive videos, and censor non-rulebreaking content that is considered “potential hate speech.” The company is also partnering with the ADL and other left-wing organizations to identify “hate speech” on the platform.

His main thesis — that political dissenters at Google face severe threats to their career — was immediately confirmed by the backlash against him, which included threats to his job and at least one threat of violence.

One social media SJW, Emily Gorcenski, said she would “beat the sh*t” out of the Google employee. Gorcenski also frequently retweets It’s Going Down, a news site that regularly supports the actions of violent “antifa” activists. 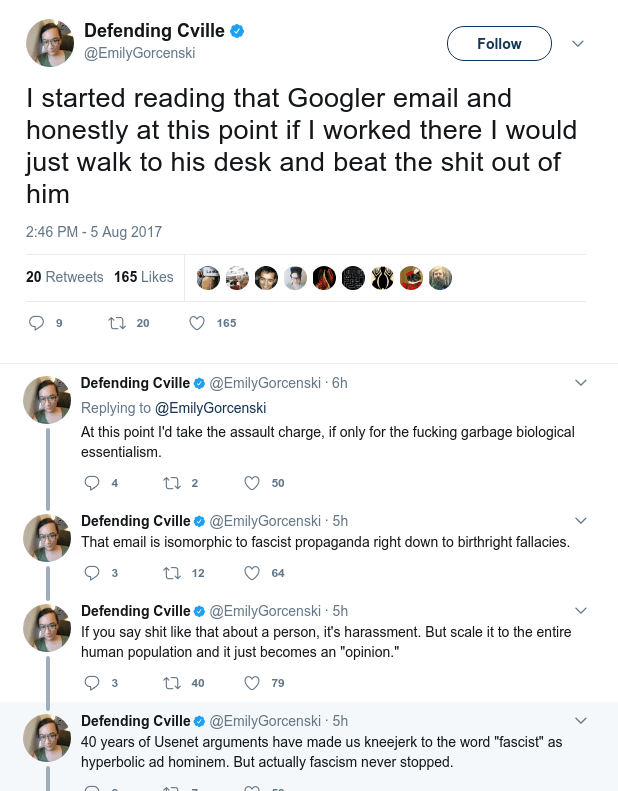 Colm Buckley, who identifies himself as someone who “does stuff at Google,” admitted that he wants certain viewpoints silenced, and said that those who believed women and minorities are unqualified (an inaccurate representation of the manifesto, which spoke of group differences between the genders) should not feel “safe to share.” He added that those that express views he finds “violently offensive” actually “deserve what’s coming to you.” 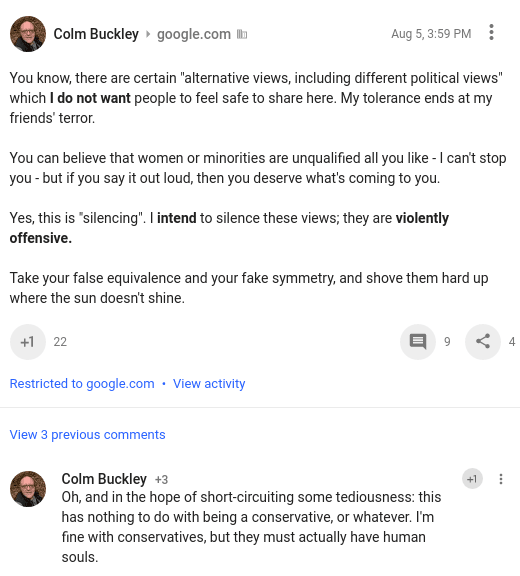 Anthony Baxter, another alleged Google employee, accused the manifesto author and his supporters at Google of being Nazis, and said they ought to be punched. 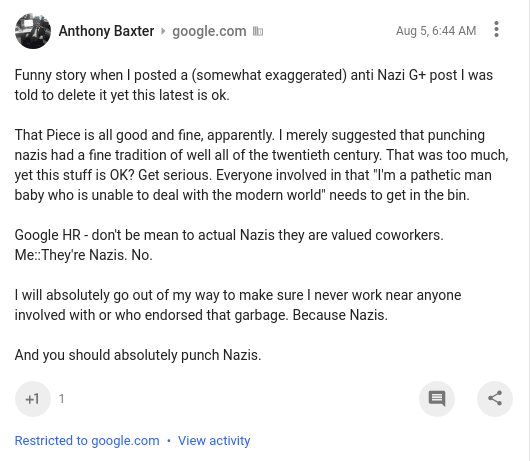 Dave O’Connor, who claims to be an engineering director at Google, indicated he was fine with supporters of the manifesto feeling “marginalized,” said he refused to engage with the document’s sources, and called it the “antithesis of what we’re trying to do at Google.” 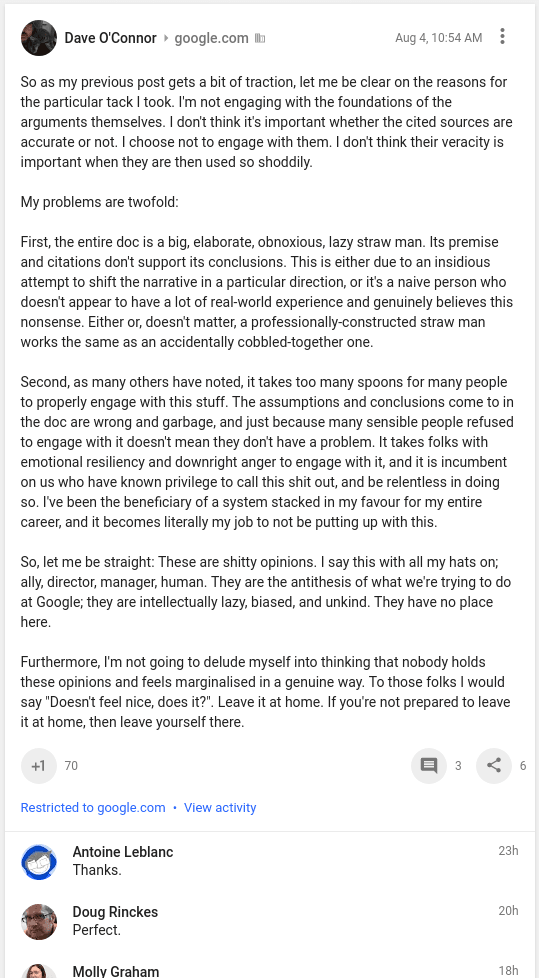 Tanya Reilly, who a site reliability engineer at Google according to her social media profile, indicated that the manifesto author ought to be “fired [into the sun].” 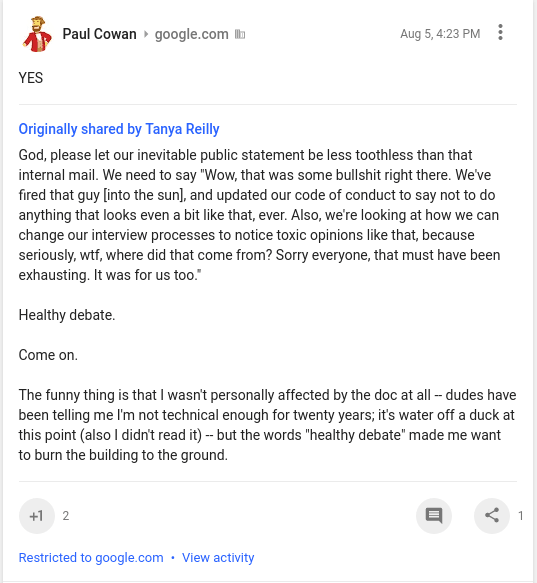 Joel Becker, another alleged Google employee, said the manifesto cost him “at least two days of productivity and anger,” and said he would not work with the manifesto’s author.

Paul Cowan, who claims to be another site reliability manager at Google, attacked the company for a “weak response,” to a “trashfire” document. His comments indicate that senior management at Google may wish to encourage “healthy debate,” but are facing bitter opposition from Cowan and other SJWs within the company. 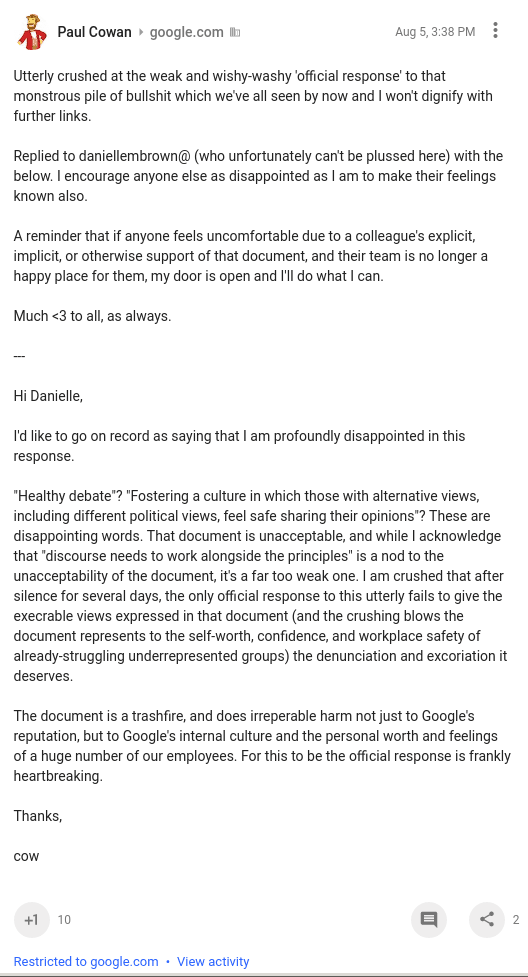