A Yale-published study claiming to mirror Facebook’s new methodology for sorting “broadly trusted” news sources from partisan news inadvertently undermines its author’s own advocacy of the methodology by listing far-left sites Salon.com and HuffingtonPost as “mainstream” while packing its “hyper-partisan” category with right-of-center news sources.

Politico ran with the headline “GOP voters trust CNN, N.Y. Times over Breitbart, InfoWars.” A more accurate headline would have been “Single Working Paper With Questionable Methodology Shows GOP Voters Trust CNN Over Breitbart.” But that probably would have got them fewer clicks.

What the study actually shows, by the authors’ own admission, is that mainstream media sources are most likely to achieve a “broadly trusted” rating by surveyed subjects due to their name recognition, not due to the quality of their journalism.

In the study, the authors admit that if Facebook were to sort news on the basis of “trustworthiness” surveys, it would favor established, mainstream outlets and punish new media — because newer, unfamiliar sources are less likely to be trusted.

Given the apparent role of familiarity in judgments of trustworthiness, highly rigorous news sources that are less-well known (or that are new) are likely to receive low trust ratings – and thus will have difficulty gaining prominence on social media. Relatedly, it is unclear how the crowdsourcing approach will scale when trying to cover the massive number of outlets which produce news content online, many (perhaps most) of which will be unfamiliar to most raters.

Nevertheless, the authors of the study — one of whom recently retweeted a post calling the Nunes memo a “stunt” born from “right-wing fever swamps” that “recklessly breathe life into conspiracy theories.” — claim this is totally fine. In fact, they think Facebook doesn’t go far enough.

The problem, according to Rand, is that Zuckerberg has said that Facebook will only count users’ trust ratings for sites that they say they’ve heard of. In other words, if a user’s answer to the first question—do you recognize this website?—is no, their answer to the second question is thrown out.

Rand said that broad unfamiliarity with a site can be a good signal that it’s unreliable. After all, “fake news” is often peddled on URL’s that few would have ever heard of.

Such an approach would, by the authors’ own admission, favor established, recognizable news outlets and punish newer sites. That includes openly right-wing news sites like Breitbart News, but also anti-establishment voices of the left that are despised by the mainstream, like Glenn Greenwald’s The Intercept.

The authors also demonstrate their super-sound judgment and academic objectivity in their list of “mainstream” and “hyper-partisan” news sources. 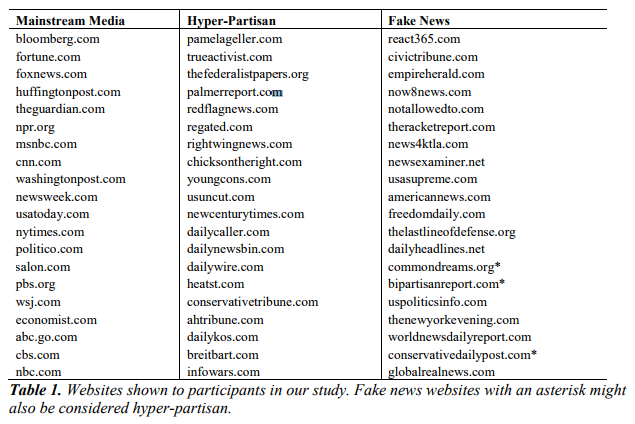 The “hyper-partisan” list is dominated by right-of-center news outlets, as well as Heat Street, a now-defunct site that was opposed to the partisan left, but not necessarily in favor of the partisan right. Only 6 sites on the 20-strong list, Daily Kos, US Uncut, Palmer Report, New Century Times, True Activist and Dailynewsbin are unarguably of the partisan left.

Meanwhile, their list of “mainstream” news sources include the notoriously far-left Salon.com, and the Huffington Post, which Andrew Breitbart praised for being “openly and loudly and radically leftist” in contrast to actual “mainstream” publications like the New York Times that attempt to hide their bias.

To compile their list of “hyper-partisan” news sites, the authors relied on sources that are themselves partisan. One is a list from BuzzFeed news, known for its left-wing, anti-Trump coverage. BuzzFeed once banned a centrist vlogger from their platform for creating a quiz called “What Type Of Anti-Feminist Are You.” Another fun way to discern BuzzFeed’s bias is to do a search for all the times they’ve used “white male” in their headlines.

A second source was media professor Melissa Zimdars, who describes recent Fox News reporting as “propaganda,” and has listed Breitbart News, The Blaze, and Independent Journal Review (IJR) as “fake news sites.” The third and final source was an unnamed colleague of the authors.

The initial study also claimed that news sites listed in the “hyper-partisan” category have “no editorial norms.” In an email correspondence with Breitbart News, one of the authors, David Rand, admitted that this statement was off the mark.

Rand has published an updated version of the study, which now says hyper-partisan sites have “weaker or non-existent” editorial norms compared to mainstream news. The new study also adds an asterisk next to Salon.com to acknowledge that the site might, in Rand’s words, “reasonably be considered hyper-partisan.”

The study’s findings are based on a sample of 1,011 people, with a median age of 36, 64.1% of whom were women, then the claim that GOP voters trust CNN over Breitbart is true. But the sample is inherently biased against conservative, pro-Trump politics. At the last election, female voters backed Hillary Clinton by 54 per cent to 42 per cent. The young median age of 36 is also a factor: in 2016, the 18-29 and 30-44 age demographics supported Clinton over Trump by wide margins.

If Facebook’s methodology for determining “broadly trusted” news sites is similar to that of this study, as its authors suggest, then it is likely to vastly inflate the “trustworthiness” rankings of mainstream news networks, many of which are the least trusted brands in America. A Gravis Marketing poll last year found that half of Americans believe that CNN does not provide objective news and analysis — a number which included 27.2 percent of Democratic respondents.

Although Facebook has said they will throw out the ratings of users who say they are unfamiliar with a news source, a spokesman confirmed to Politico that the social network will still take a source’s name recognition into account — although they would not reveal how.

“This is about getting feedback from people who use Facebook in order to improve quality — and fight clickbait, sensationalism, and misinformation” said the Facebook rep. “It’s not about stack-ranking news organizations. If a broad sample of people recognize a news organization and trust it, that’s a good thing. If they don’t recognize it or don’t trust it, that’s not as good.”

One thing that the study proves conclusively is that people are far less likely to trust sources they don’t recognize. If Facebook is judging sources by their name recognition, that’s good news for the establishment, and bad news for anyone who hoped the internet would create a truly open marketplace of ideas.

Breitbart News is currently listed by Alexa as the 53rd most popular website in America.