As Facebook faces a crisis related to a user data scandal and the 2016 election, it seems appropriate to reflect on Facebook’s COO Sheryl Sandberg telling Clinton campaign manager John Podesta that she wanted Hillary to “win badly.”

In a May 2015 email thread, Hillary Clinton’s campaign manager John Podesta offered his condolences for the sudden death of Facebook COO Sheryl Sandberg’s husband, Dave Goldberg. Sandberg thanked Podesta for his kind words, then affirmed her desire to “help” Clinton win the 2016 election. She mentioned a home visit where Clinton interacted with her children. “I still want HRC [Hillary Rodham Clinton] to win badly,” she wrote. “I am still here to help as I can. She came over and was magical with my kids.”

Previous batches of leaked emails revealed that Sandberg offered to put Podesta in contact with Facebook CEO Mark Zuckerberg, stating that Zuckerberg was interested in influencing policies relating to “social oriented objectives (like immigration, education or basic scientific research).” Podesta appears to have at least arranged that meeting; his assistant emailed him in August 2015 with directions to Zuckerberg’s office.Further emails showed a meeting between Sandberg and Podesta was organized to “step through the research on gender and leadership by women.”

In another email, Sandberg told Podesta that 2015 was a challenging year but thanked him for his help and support. She also stated, “[I] Look forward to working with you to elect the first woman President of the United States.” 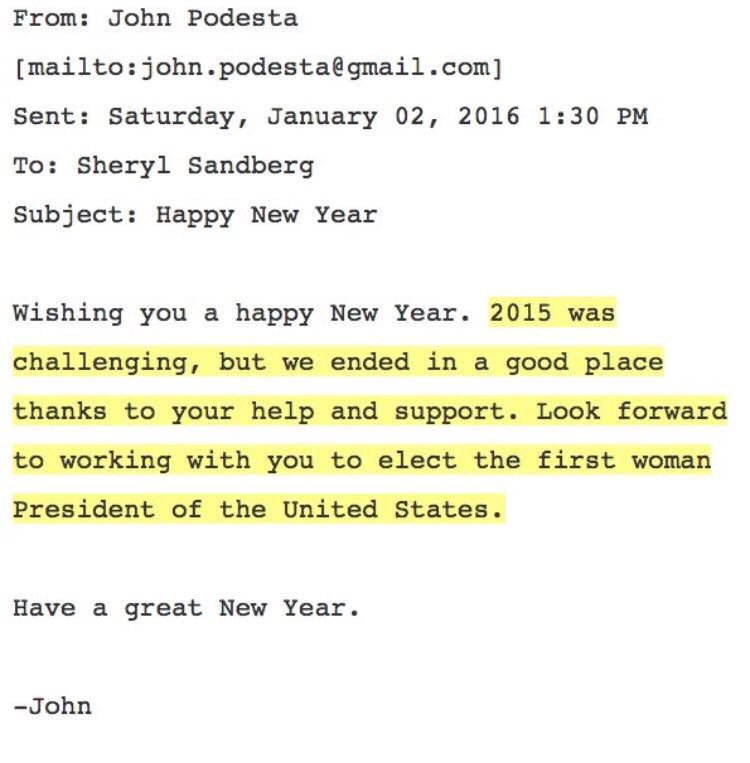 Silicon Valley has long seemed to be working in favor of the left, Facebook has a history of censoring anti-Hillary Clinton content, while WikiLeaks founder Julian Assange stated that Google was “directly engaged” in the Clinton campaign. Google has also been accused of censoring search results that may paint Clinton in a negative light.

Facebook CEO Mark Zuckerberg has also been politically active since 2013, when he co-founded a 501(c)3 called “FWD.us,” primarily lobbying for expansion of the H-1B visa program and amnesty for illegal immigrants. The organization has not openly endorsed Clinton’s “dream,” revealed in a private speech to a Brazilian bank, of “a hemispheric common market, with open trade and open borders,” but it forcefully attacked Donald Trump’s stance of strong border security, including a physical wall. Zuckerberg also made waves when he appeared to be on a Presidential campaign tour of the country leading to rumors that he may be running for President himself.

Facebook appeared to show a pro-Clinton bias throughout the 2016 election, with moderators deleting or banning innocuous content which criticized Clinton, including a whole community page that mocked her, and the personal profiles of users with pro-Trump opinions. When Wikileaks released emails exposing the Democratic National Committee’s sabotage of Clinton’s primary rival Bernie Sanders, the site blocked users from sharing links to the leak. When Wikileaks complained, Facebook said the suppression of those links was an “accident.”