Philip Lewis, the current front page editor for the Verizon-owned news outlet the Huffington Post, has a history of antisemitism, homophobia and anti-police bias according to posts on Lewis’ Twitter account. The Huffington Post is currently owned by digital content company Oath, a subsidiary of Verizon Communications. “The tweets were first discovered by the Daily Caller, some of the tweets date back to 2011 while others are more recent. In one anti-semitic tweet, Lewis said:  “Where da jews, where da jews, where da jews at – DMX ft Hitler.”

In another poorly formed joke, Lewis tweeted:  “im tired of all these jewish jokes….Anne Frankly, i dont approve.”

In another tweet, Lewis openly praised the known antisemite and anti-white leader of the Nation of Islam, Louis Farrakhan. “Louis Farrakhan is as sharp in 2015 as he was in 1967. I hope my mind can stay that sharp as I age,” tweeted Lewis. Farrakhan recently lost his Twitter verification badge for a tweet which read: “the Satanic Jews…control everything and mostly everybody.” Farrakhan is also on record praising Adolf Hitler saying: “The Jews don’t like Farrakhan, so they call me Hitler. Well, that’s a good name. Hitler was a very great man.” 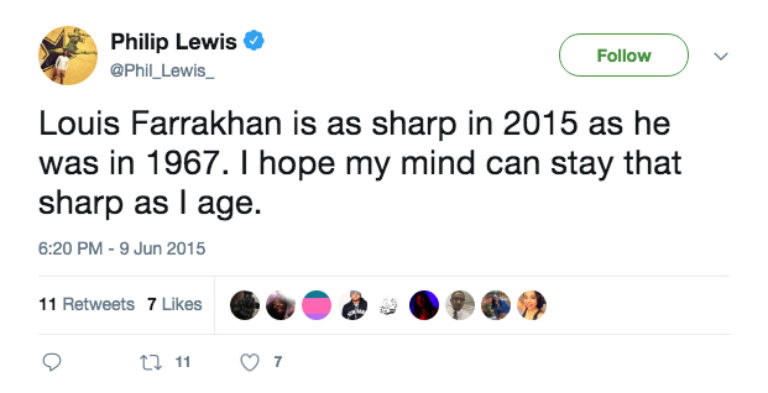 In 2014, Lewis used the homophobic slur “dyke” to reference a homosexual woman saying: “Got hit on last night by a dyke, I’m still confused as to what that was all about lol.”

In another tweet, Lewis state,d “Get this dyke off the computer lol.”

Lewis also voiced his negative opinion of police officers in another tweet stating “I hate cops.”

Breitbart News reached out to Verizon for comment on Lewis’ tweets. The request was referred by Verizon to their digital content subsidiary, Oath. A spokesperson for Oath provided the following comment:

This information was just brought to our attention. Oath has launched an internal investigation regarding the employee in question and will take appropriate steps based on the results of the investigation.