Facebook recently refused to run Christmas buying guide advertisements from Christian gaming review website “Christ Centered Gamer,” a decision the social media giant told Breitbart News was an “error,” but the company has made no move to reverse the decision and has not contacted Christ Centered Gamer since.

Popular Christian video game review website  Christ Centered Gamer ran into issues when attempting to advertise on Facebook recently when the social media platform refused to publish their advertisement. Christ Centered Gamer (CCG) publishes a yearly Christmas buying guide, listing some of the most fun and family-friendly games for Christian parents to purchase. The website attempted to run an advertisement on Facebook to promote its buying guide but the ad was refused by Mark Zuckerberg’s platform, the second largest digital advertiser in the world.

Christ Centered Gamer described the aim of its website in an email to Breitbart News stating: “When we review a game, we look at many factors, including gameplay, graphics, sound, stability, and controls, like many traditional reviews do.  From the moral perspective, we include violence, language, sexual content, occult/supernatural, and cultural/moral/ethical issues. ”

“As for sexual content, we point out any sex outside of Biblical marriage, including homosexual content.  Like other moral factors, we mention its presence and leave it up to the reader to decide if it’s for them or not.  Some readers may take offense to pointing these things out, but we strongly believe that following the Bible on what is right and wrong is very important to us.  On the flip side, it is often our attempt to be as objective as we can be that has drawn in many non-believers to our site.”

Christ Centered Gamer’s unique approach is to give video games separate scores for the two categories — a traditional gaming review score and a morality score. This has come to be appreciated even by non-religious gamers, who frequently struggle with progressive gaming blogs that mix politics with gaming.

Below is a screenshot of the advertisement provided by Christ Centered Gamer to Breitbart News. Below the advertisement, the words “Not Approved” can be seen highlighted in red, indicating that the ad was not approved to be shared on Facebook’s advertising network. 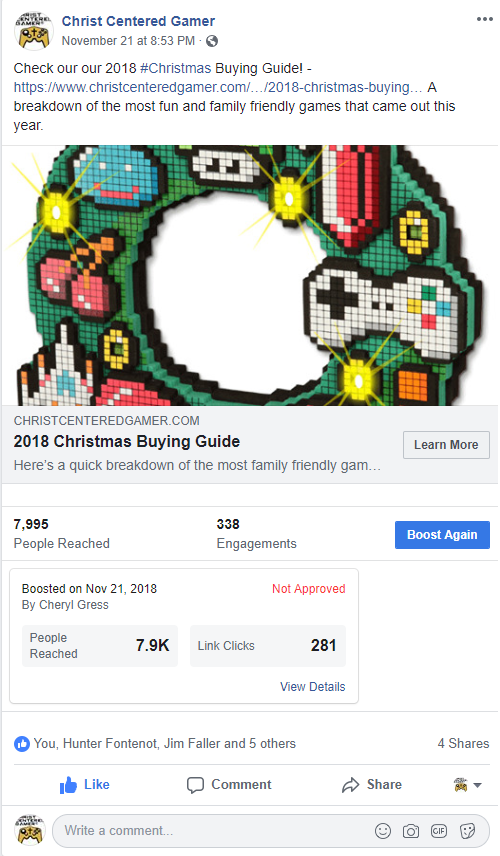 Breitbart News reached out to Facebook to question why Christ Centered Gamer’s advertisement was not allowed on the platform. Facebook responded that the refusal was, in fact, an “error.” A Facebook spokesperson told Breitbart News: “The ad was incorrectly rejected and we apologize for the error. We review millions of posts each week and sometimes we make mistakes. The ad is now live on Facebook.”

However, Christ Centered Gamer says they have yet to receive a notification that their advertisement is running on the platform. As of publication, the editorial staff of the site has not been contacted by Facebook.

Breitbart News will be following this story closely and updating as the situation develops.