The student government advisor at Wilmington College in Wilmington, Ohio, warned the school’s student body president, a member of Turning Point USA (TPUSA), that his conservative social media posts could put him “in this little box” and cause others to “cast judgment” on him, as well as burden his fellow student government members with having to answer for his opinions.

The faculty advisor to Wilmington College’s student government association (SGA), Sigrid Solomon, suggested that the school’s student body president, Logan Schroer, think twice about sharing pro-Conservative and TPUSA content on his private social media account in an effort to prevent others from casting judgement on him.

The specific social media post that led to Solomon’s comment was an Instagram photo of TPUSA signage, buttons, and other activism materials, with a caption that read, “Thank you [Turning Point USA] for the activist package! I’m so thrilled to spread conservative ideas on a college campus!” 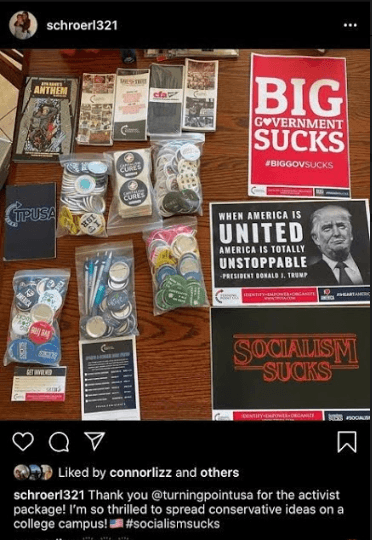 Schroer is both Wilmington College’s student body president and the president of the school’s TPUSA student group. On April 28, members of the student government voted to deny the TPUSA group from receiving official recognition from the college.

So when Schroer later posted to Instagram expressing his desire to share conservative ideas on campus, the student was told that his social media post had upset SGA members, and other students.

After the post, a conference call was organized between Schroer, advisor Solomon, and the SGA vice president.

“I realize the organization has been denied by student government, but I am still a member of the national charter,” said Schroer in the phone call, which was obtained by Breitbart News.

“So I just posted that saying I was very excited to share these ideas on campus,” added Schroer.

Solomon, however, argued that Schroer’s TPUSA-related social media post has burdened his fellow student government members with having to answer undue questions from others regarding the conservative student group.

“Do you see how maybe that other students are getting some steam from [your social media] and then they’re now questioning student government regarding that?” said Solomon.

“I don’t see how it’s a huge issue, personally,” maintained Schroer, who reminded Solomon that he had posted the photo to his private Instagram account.

“Even though you might post something on your private page, it can be construed in a very different way,” insisted Solomon.

The SGA advisor then went on to suggest that if Schroer feels compelled to make pro-TPUSA social media posts, he should also include context that reminds people TPUSA was denied official recognition by student government.

“At least let folks know that, ‘Hey, I’m excited about [TPUSA] for my own personal views, but as a whole, here’s a little bit something else to think about,'” said Solomon, who reminded Schroer that student government “decided not to recognize this particular organization on campus.”

But Solomon didn’t stop there. As the conversation continued, the SGA advisor went as far as to suggest that she is only trying to “protect” Schroer from others putting him in “this little box,” and painting a picture of him “that is not accurate.”

“You are at the highest seat that a student can have in their tenure of a college,” said Solomon. “And what I don’t want to have happen is just because you feel strongly about certain things, I do not want people to put you in this little box and cast judgment.”

“This is what I don’t want, Logan, I don’t want people to paint a picture of you that is not accurate — as you represent the entire student body,” added the SGA advisor.

“I am that protector for you,” she added. “I want to make sure that you’re not setting yourself up for something that could be a huge situation in the future.”

When Schroer expressed that he wished this conversation could be done privately — without the student body vice president on the call — Solomon stated that the SGA vice president was included because she also risks having to answer for Schroer’s activity on social media.

The SGA advisor also suggested that the conservative student figure out a way to “stay true to your convictions” while also being a good role model for fellow students on campus.

“How do you make sure that all of that is represented, but represented in a way that is not off-putting to the student body?” asked Solomon.

“In no way do I mean to bring any bad light on SGA for my conservative values,” Schroer explained. “But many people on campus know I’m a very outspoken conservative.”

“This conversation has been about my political affiliation,” added Schroer, who noted that Solomon never said anything to the SGA vice president about her political views, which fall on the other side of the aisle.

Schroer told Breitbart News that as of Thursday, he has not yet been able to resolve the situation and get TPUSA officially recognized by Wilmington College.

While some colleges and universities allow their student governments to decide which groups can be officially recognized by the school, administrators have been known to intervene and override decisions involving students who may be subject to political bias from their peers.

Wilmington College did not respond to Breitbart News’ request for clarification on why TPUSA was denied official recognition, and whether the school plans on overriding student government’s decision.

Solomon did not respond to Breitbart News’ request for clarification on whether she suggests that student government members with left-leaning political opinions also be cognizant about how they may appear to others when sharing their political views on social media.