For the past nine months, the great state of Arizona has been the subject of withering media attacks by an insulated chattering class whose lack of perspective may one day be studied in graduate psychology programs (because journalism school will be indistinguishable from clown school by then). The horrific attack on Rep. Gabrielle Giffords by a lone, obviously deeply disturbed gunman has opened the state and my hometown of Tucson up to more irresponsible derision from the echo-chamber MSM. 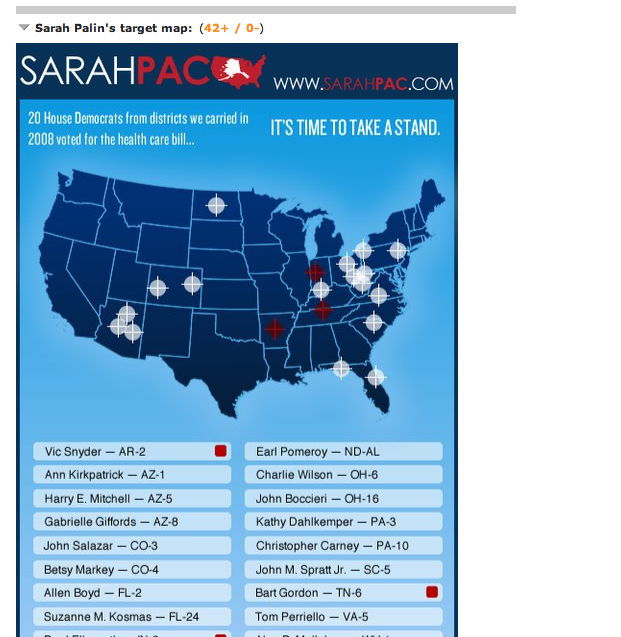 Note to HuffPo and the New York Times: one psycho does not a culture make.

I won’t even bother linking to the various hit pieces in the above-mentioned publications, they’re so prevalent right now one doesn’t have to search hard to find them.

Let us begin, rather, with the notion of a “culture” in Arizona, which implies some sort of static population that’s developed its ideals over time. The state had 1,775,399 residents in 1970. The most recent census puts that figure at around 6.4 million. That kind of growth is a bit too rapid to attribute to the friskiness and fertility of the natives. The fact is that Arizona is a melting pot within a melting pot, quickly adding people from all over the United States for the past forty years. People have been flocking there for the weather and the jobs, by the way, not to join a militia. If anyone wants to attribute certain attitudes to “the people of Arizona” those same attitudes should be applied nationally, as most of the state’s population has streamed in from elsewhere.

My next point is purely anecdotal but important for context. A lot is being said about the availability of guns in Arizona. My grandfather owned a gun store. I got my first real rifle when I was six (a Savage bolt-action .22). I grew up around a lot of guns, as did almost all my friends. To this day, we all remain remarkably free of homicides and accidental shootings.

I mention that because I get the sense when reading anti-gun articles that those writing them assume gun owners default to grabbing a weapon for conflict resolution. Most probably wouldn’t admit that but the implication is there.

The simple truth is that Arizona has always been home to people who own guns legally and don’t go on shooting sprees. The tendency by anti-gun people to assume that possibility is always lurking is not only irresponsible, but also unsupported by facts.

The same media that wants you to think Arizona is ready for OK Corral v. 2.0 were only too eager to point out during the SB1070 debate that violent crime rates have been dropping there.

So, remember, when the Left is talking about illegal immigration, Arizona is a safe place. As for the rest of the time, all hell is breaking loose. (Particularly ridiculous in this HuffPo piece is this contention: : “Arizona may not be uniquely conservative, but it has become far more so in recent years.” Both Gabrielle Giffords and Raul Grijalva survived close elections in a year that didn’t exactly favor incumbent House Democrats.)

The debate over SB1070 is far too complex to revisit here but it was responsible for kicking off the nationwide Arizona bashing. The range of idiocy from a group of people who either had never been to the state or spent very little time there was also too wide to deal with fully at the moment. The majority of the knee-jerk criticism sought to portray the legal citizens of Arizona as racist and anti-immigrant.

In truth, Arizonans, particularly in the two largest population centers, are tired of the decades-long fallout from the very real drug traffic that emanates from Mexico.

The same DOJ publication noted a couple points long known by Tucson residents but completely ignored by critics intent on portraying them as a bunch of crazed rednecks who were manufacturing a problem out of whole cloth.

Drug production within Tucson is generally limited; most drugs are smuggled into the area from Mexico.

In fact, GIITEM and the Arizona Counter Narcotics Alliance report an increased level of violence, particularly homicides, in Tucson that is attributed to increased drug trafficking activities and the rising number of gang members who operate in the area.

Per the Dept. of Justice, it would seem that there is a correlation between increased drug traffic and violent crime. And where is that traffic coming from? You got it.

This same piece notes that the porous border is indeed the problem. And that’s what residents of Southern Arizona have been saying all along, this really is about the dangerous people who have been availing themselves of an almost previously unmanned border, not a hatred for the people who have come across to work on farms.

While the violent crime rate may have gone down recently, it was doing so off the spikes mentioned in this 2007 report. Again … context.

This problem isn’t something that just sprung up out of the blue in the past few years. I lived a dozen or so blocks from the border in Douglas, AZ for a very brief time when I was a kid. I awoke one morning to find out some drug traffickers had been taken down in our front yard in the middle of the night.

SB1070 was simply a reaction by people who had grown too frustrated with a decades-long abandonment of responsibility by the federal government. Nothing more. No hidden bigotry. No crazy cowboys looking to go off on “brown skinned” people (can’t remember how many times I read that last summer).

Arizona faces the same economic problems that most other states have been facing in recent years. It also faces problems that are unique to it, such as how to accommodate the rapid population growth and deal with a drug traffic problem from Mexico that is far worse than in the other border states.

A problem it does not face, however, is the specter of a seething, hostile populace that’s going to have the streets flowing with blood any day now.

The people of Arizona are by and large good and deserve better than what they’ve gotten from the press, the president, the attorney general and others in the past nine months. The vile human being who killed all those people last Saturday is not representative of anything but his own wretched mental health circumstances.

The unhinged, uninformed demonization by the MSM out one side of its collective mouth while it’s calling for civility out the other is especially galling.

But, sadly, not terribly surprising.