Earlier this morning 500 or so members of the AFL-CIO stormed a port in Washington, vandalized the facility, reportedly cut the brake lines of train cars, and held six guards hostage. Shockingly, no one was arrested. Earlier that week a judge issued a restraining order against this same group after they clashed with police while brandishing bats and issuing death threats. Nineteen people were arrested for misdemeanors.

While all of this was going on, the group’s head, Richard Trumka, was invited as a guest of the President to tonight’s jobs address. 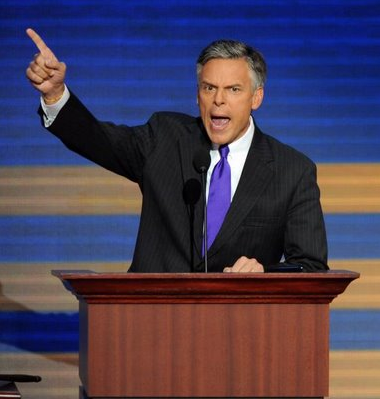 A union worker blocks a grain train in Longview, Wash., Wednesday, Sept. 7, 2011. Longshoremen blocked the train as part of an escalating dispute about labor at the EGT grain terminal at the Port of Longview.(AP Photo/Don Ryan)

Rebel Pundit reminds us of when Illinois’ Jan Schakowsky called tea party-supporting congressmen “radical hostage takers.” I wonder if the congresswoman would like to amend her statement now?

If you thought that all of this would score major news coverage, you’d be wrong. Only a handful of outlets have written about it. As of this writing, I’ve not seen any television coverage and I have not seen a single mention of it on a Soros-funded blog.

Trumka sat with the First Lady — along with GE President Jeff Immelt (while the President gave an address that ironically touched on crony capitalism and big business) as though nothing had happened. I speculated initially as to whether or not the President would continue to force such displays in our faces; the answer is yes, because they want us to grow accustomed to this behavior. They want us to think normal of it when Americans are targeted by, as Hoffa so aptly put it, “Obama’s army.” News barely batted an eye at the violence perpetrated by unions upon Wisconsinites; the majors ignored it when a non-union business owner was shot, his property vandalized for his business being non-union; it’s the Gladney-ization of America and the news is silent. We’ll grow used to seeing such violence play out when the public sector, which accounts for a small percentage of workers in America, doesn’t get it’s way. Acclimation will lead to apathy, and fait accompli their objective is realized.

All, apparently, with the approval of this administration.