The MSM were collectively apoplectic when the Daily Caller’s Neil Munro asked a question out of turn at one of President Obama’s pressers in the Rose Garden. They circled the wagons around President Obama, demanding that Munro apologize for asking a question in the Rose Garden. Contrast that with their behavior earlier towards presidential hopeful Mitt Romney, towards whom they screamed “gaffe!” and questions at the Tomb of the Unknown in Pilsudski Square.

“Kiss my ass; this is a holy site for the Polish people,” said aide Rick Gorka. “Show some respect.”Gorka then told a reporter to “shove it.” 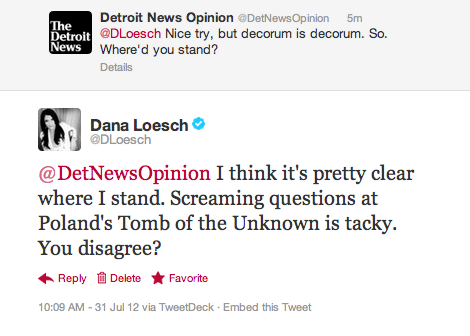 Apparently the Detroit News’s editorial page, or the person running its Twitter account, believes that there is no difference between a press event in the Rose Garden and a ceremony at Poland’s Tomb of the Unknown.

It’s quite shocking, really; the American press has berated Romney from start to finish on his overseas trip, plastering “gaffe” headlines and speculating about much damage, from their perspective, Romney has done to allied relationships. It’s a dazzling absence of self-awareness displayed by the media here. I’m not sure screaming questions and “gaffe” to a presidential contender as he finishes laying a wreath at a sacred Polish site helps relationships with our allies. The “decorum” the press speaks of apparently doesn’t apply to the reporters screaming at the top of their lungs graveside, but does  to Romney for choosing not to politicize a burial site.

I asked the Detroit News whether or not they consider the Rose Garden to be the same as a sacred Polish burial site and as of this writing have yet to receive an answer.

No one has a problem with the press asking Romney questions. But this isn’t about asking questions, this is about their hatred for the Republican candidate outweighing their common sense and manners at a sacred Polish burial site. So desperate were they to scream about “gaffes” — a narrative they fabricated by repeating British headlines–that they pushed aside respect for the Polish people.

The press wants to act offended because Romney’s aide told them to “kiss my ass” and “show some respect for the Polish people.” The press, whose lips have been affixed to the backside of our current president for nearly four years, are suddenly taken aback when told to kiss that of another? Is being told such worse than screaming like a Justin Bieber fangirl at a concert while Poland honors an unknown soldier who gave his life for his country? No, it isn’t.

The press owes the Polish people an apology.