In what appears to be a preview of the race-obsessed, biased “news reporting” of the future, two college students, AJ Vicens & Natasha Khan, manage to further the partisan agenda of vote fraud deniers while languishing over imagined racial injustice.

Their article, “Voters feel intimidated by election observers,” published in the Tucson Sentinel, targets the Houston-based group True the Vote. According to these reporters, the group implements intimidation tactics such as strategically placing white people with pencils in black neighborhoods. They claim that these intimidating soccer moms, dads, and grandmas are part of a gang of election observers that True the Vote plans to place across the country.

Since 2010, 37 state legislatures have passed or considered such laws, championed by conservative activists, including True the Vote. Critics claim these new restrictions could suppress the votes of millions of people, especially minorities, across the country.

With little evidence or statistics on the number of actual minorities disenfranchised by the efforts of groups like True the Vote, the young reporters rely on exactly what they accuse the group of using — anecdotes. One source cited in the article claims intimidation exists when a white person is passive in a room filled with blacks.

As Jamila Gatlin waited in line at a northside Milwaukee elementary school gym to cast her ballot June 5 in the proposed recall of Wisconsin Gov. Scott Walker, she noticed three people in the back of the room. They were watching, taking notes.

Officially called “election observers,” they were white. Gatlin, and almost everyone in line, was black.

“That’s pretty harassing right there, if you ask me,” Gatlin said in the hall outside the gym. “Why do we have to be watched while we vote?”

Three white people in a room full of blacks? Really? Does the left really think that minorities are incapable of interacting with whites without being cowed? Given the real suffering of blacks in the past, is it okay to trivialize what constitutes intimidation? In an effort to paint minorities as victims, the cub reporters come off sounding absurd.

True the Vote never relies on anecdotes — only public records using a triple check method involving voter registration, appraisal district data, jury lists and driver’s licenses. The claims used in the article appear to be an elaborate attempt to discredit True the Vote and push forth a partisan view that falsely claims voter suppression.

In Birmingham, Alabama where this reporter grew up, the legacy of racial intimidation is real. It is evidenced by the stark exhibits at the Civil Right Museum downtown, the historic markings at the 16th Street Baptist church a few blocks from my old home, or Martin Luther King’s letter from a Birmingham Jail. Every time blacks are used as pawns in the voter fraud game, it ignores the blood spilled for our rights, including the right to vote.

Just in case the ace reporters exhausted their resources trying to find any blacks who were intimidated by the mere presence of a white person, here is the map of our old friend ACORN’s 2008 fraud, courtesy of the Election Law Journal: 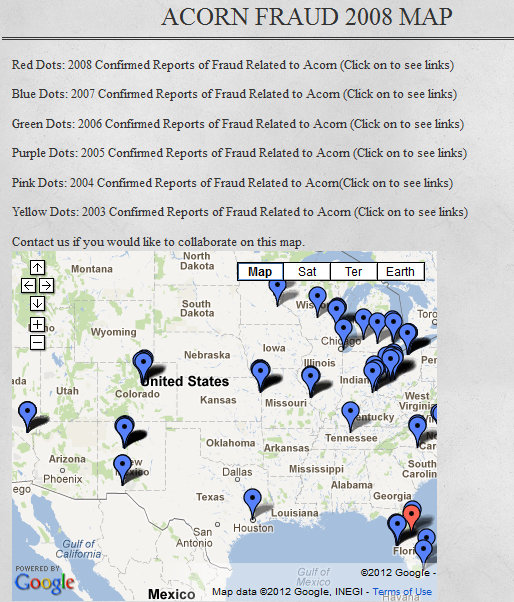 Speaking of ACORN, isn’t it convenient that the entire article espouses the ACORN/Project Vote arguments of voter suppression by evil right wingers and even quotes from ACORN “coalition partners” the Brennan Center and the Advancement Project?

“We are concerned about groups that exaggerate claims of voter impersonation in order to organize efforts that can lead to intimidation of eligible voters,” said Eddie Hailes, managing director at the Advancement Project, a Washington D.C.-based civil rights group.

According to an internal ACORN document called the ACORN Political Program 2005-06 and Beyond, this whole agenda — preventing the clearing of the voter rolls and blocking photo voter ID — are the brainchild of one of the most corrupt political organizations in history.

In the upside-down world of the vote fraud deniers, it is apparently okay for a group convicted of voter fraud to prevent measures aimed at stopping fraud. The passage below is from page 16 of the ACORN Political Program document:

In 2004, ACORN embarked on an Election Administration Project to ensure voters were able to make their voices heard at the polls. In working with partner organizations, including the Advancement Project, Project Vote, the Brennan Center, the NAACP Legal Defense Fund, and the ACLU, we found that ACORN fills a unique need, with staff who are knowledgeable about election administration issues and who know how to organize communities in order to make things happen.

An unaltered ACORN  transcript of a managers conference call in this reporter’s possession has a date stamp of July 2005 and states: 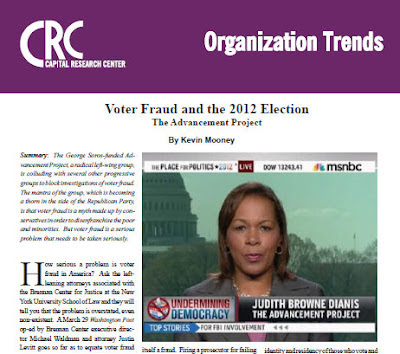 Exactly who are these student reporters who appear incapable of doing real research? They are part of a program called News21. Their website describes the initiative:

The Carnegie Corporation of New York and the John S. and James L. Knight Foundation joined forces in 2005 to launch News21 as a cornerstone of the Carnegie-Knight Initiative on the Future of Journalism Education.

Carnegie is a longtime ACORN funder, and now they are funding a new generation of so-called journalists.  In 2006, Carnegie also gave $200,000 to the Advancement Project and may continue to fund them. Curiously, News21, in line with the ACORN Agenda, has an entire site dedicated to voting rights. 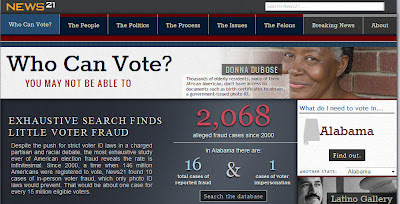 While getting the vapors over phantom racist motives and using ACORN cronies as evidence, the rookie reporters also failed to properly understand history.

Chandler Davidson, a professor for nearly 40 years at Houston’s Rice University and an expert on minority voting rights in Texas, sees the King Street Patriots and True the Vote’s activities in a historical context.

“We have a long and sad history of efforts by the white majority in the state of Texas to prevent or cut down on the ability of minorities to vote and to elect candidates of their choice,” Davidson told News21.

If it isn’t racism, Davidson said, the goal is to suppress Democratic votes.

Historical context? According to PBS’s “The Rise and Fall of Jim Crow,” Democrats are the ones with the history of suppressing the black vote.

The white South, however, was determined to limit, if not deprive, African Americans of their right to vote. These devices, from the poll tax to physical violence, were only partially successful…

Since the South was totally under the political control of the Democratic Party, this meant that the only really important election was the primary.

The Democrats also have a history of crying wolf when it comes to voter suppression. A 2004 document released by the Democrat National Committee coaches Democrats on how to launch an intimidation campaign when there has been no intimidation. 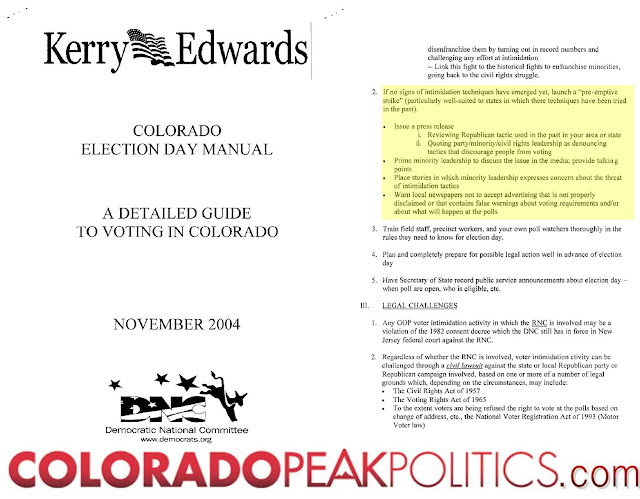 One can conclude that News21 and its far-left funders appear to have an agenda for publishing this obvious hit piece on True the Vote. The article virtually drips with racial undertones and innuendo, including this passage.

True the Vote claims its volunteers are diverse. However Engelbrecht denied News21 requests for a demographic breakdown of her volunteers.

According to a recent survey, 67% of ALL Americans support some form of photo ID to ensure fair elections. This reporter has to wonder if, as well as failing to do proper research, these reporters are also unable to spot a black person when they see one. The reporters attended the True the Vote national summit in April but failed to mention myself or Artur Davis, a former black Democrat Congressman from Alabama, as working or collaborating with the group. 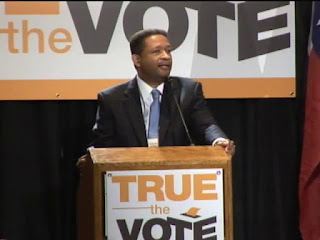 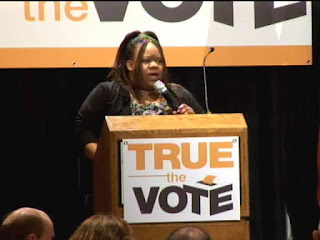 Or maybe that truth did not fit in with the narrative or agenda of News21 and its reporters.