***UPDATE: Piers Morgan responded to this article on Twitter, personally accusing me of smearing him and twisting his “obvious sarcasm.” I responded by asking how straight-forward reporting and quoting what he said constitutes twisting or smearing, and will update this post if there’s an answer.

***UPDATE II: In follow-up tweets, Morgan hasn’t been any clearer in explaining how quoting him constitutes a smear. I will say, there’s no reason not to believe him when he says his tweet was sarcasm. I’ll let others decide if being flippant and sarcastic about Sandy Hook is appropriate.

This morning on Twitter, CNN’s Piers Morgan answered “of course I am, you moron” when asked if he was “gleeful that a tragedy happened to help you push your cause.”

There’s no doubt that the “tragedy” referenced is the horrific Sandy Hook Elementary School shooting that occurred last Friday, and that the “cause” is gun control: 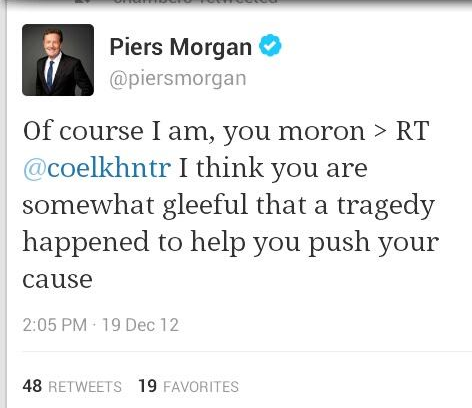 Over the past 24 hours, Morgan has become increasingly unhinged over his pet issue of American gun control. Last night, on his low-rated CNN show, Morgan lit into a gun rights advocate, hysterically calling the man an “idiot” and “unbelievably stupid.”