It’s pretty obvious Breitbart editor-at-large Ben Shapiro’s command performance on “Piers Morgan Tonight” has gotten under the skin of the left-wing media. Apparently, Shapiro’s command of facts, logic, world history, and the Constitution not only left Morgan rattled and speechless, but also did the same to the CNN network as a whole. How else to explain this series of petulant Tweets fired off by CNN senior producer Steve Krakauer: 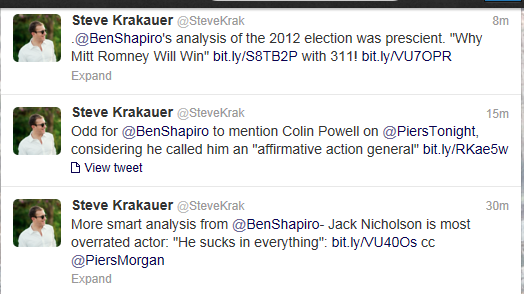 In summation: This is how CNN senior producers treat guests who don’t roll over and play dead:

Look over here! Over here! Don’t look at the humiliating drubbing our blowhard took last night. Because-because-because Ben Shapiro doesn’t like Jack Nicholson! and thought Romney would win! and is no fan of Colin Powell! Hahahahaha! What an idiot, right…? This means everything he said last night is wrong, right?

What’s especially funny about this is that, after 15 hours and a full night to sleep on it, the entire CNN media-complex still can’t come up with an intellectually honest rebuttal to the points Shapiro made last night. So rather than accept defeat like adults, CNN senior producers choose to start publicly hurling non sequiturs covered in mud.

And it wasn’t just this one senior producer. Morton Downey Jr. Piers Morgan himself got into the act:

Is this really the kind of shop Jeff Zucker, the newly installed head of CNN, wants to run? Is this the “new” CNN: A bunch of unprofessional crybabies who pose as objective journalists have a bad night and then start hurling rocks after the invited guest has turned his back?

Good luck with that.