In the past week, the investigation into the September 11, 2012 attacks on the US Consulate in Benghazi has been the dominant news story on most media outlets, including such traditional media venues as CBS News and The Washington Post.

But you wouldn’t know it, if the New York Times was your sole source of news and information.

Take a look at the stories that the “Old Gray Lady” has deemed were not fit to print:

A good-faith search of the word “Benghazi” on the New York Times website produces no results on any of these stories despite the fact that these stories have virtually dominated the news cycle on new and old media.

Even more embarrassing for the New York Times, “Benghazi” is the fifth most popular search term on their site as of Tuesday morning. It’s not like their readers aren’t interested in the topic. 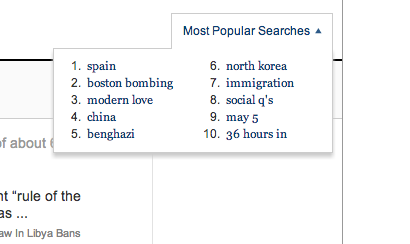