BuzzFeed Politics claimed an exclusive find as the top story on the site’s homepage Tuesday evening–the presumed identity of the young woman caught up in Anthony Weiner’s latest sexting scandal. 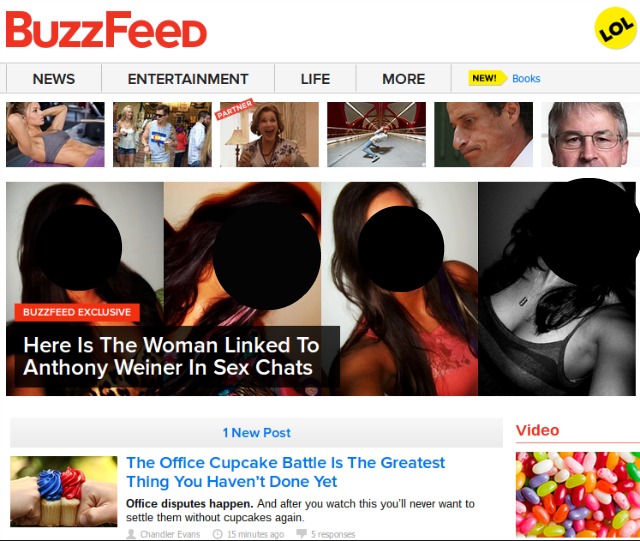 Note: the images of the woman’s face are uncensored at BuzzFeed.com.

“Here Is The Woman Linked to Anthony Weiner In Sex Chats,” the headline reads, and the lede mentions a social media post of hers that appears to defend the then-Congressman while his original Twitter sex scandal raged in 2011.

A progressive activist from [redacted] in her early 20s who identifies herself online as [redacted] and [redacted] is the woman whose online profile is linked to the latest Weiner scandal. Weiner, she wrote, could “continue sending dick pics every single day.” [emphasis in original]

The piece delves into Weiner’s victim’s online presence. The authors claim to have found the Formspring account through which the mayoral candidate found her, according to TheDirty.com, which broke the story of the young woman’s allegations. BuzzFeed includes the state where she presumably lives and reports on her political positions, including an association with a political campaign.

The byline on the piece goes to Andrew Kaczynski and Ellie Hall, though many other Politics staffers get credit: “Benny Johnson, Jon Passantino, Michael Rusch, Jessica Testa, Hunter Schwarz, Adrian Carrasquillo, and Samir Mezrahi contributed to this report.”

The site has not limited its coverage to the young woman’s identity, as six other Weiner-related pieces went up Tuesday before exposing her:

In addition to the site’s homepage, the article is featured at the BuzzFeed Politics vertical at the time of this writing.

The piece has inspired some critical reaction from journalists. Adam Weinstein, an editor at ABC-Univision’s Fusion, characterized the article as “slut-shaming.”

Others seemed impressed with the online research behind the piece. Blake Hounshell of Politico tweeted, “If it’s on the Internet, rest assured, @BuzzFeedAndrew WILL find it.”

When reached for comment, BuzzFeed Editor-in-Chief Ben Smith stated, “I was really proud of the fast and accurate reporting our team did on this one — I don’t really have further thoughts.”

TheDirty.com accused Weiner of behaving like a “sexual predator” towards the young woman. The site, known for its biting gossip and insults of women’s looks, chose not to reveal her identity.

Reporter Kaczynski lived in Weiner’s congressional district when the politician still served as a Representative. He shared in an MSNBC appearance soon after Weiner announced his candidacy for mayor that his neighbors all had positive experiences with the then-Congressman’s office.

The people in his district knew him for having the best constituent services; they knew him for helping out with every dispute. There were some issues with a couple of my neighbors where they had a dispute between the neighbors, and his office called and they helped him settle it. His office would take anything… In DC, people saw him as this liberal and he was outrageous, but in New York, he really did do a lot of things for the people in the district.

Kaczynski authored the articles “Weiner’s Wholesome People Magazine Spread Came One Week After Starting Online Relationship” and “Anthony Weiner: Some Sexts Came After I Resigned” Tuesday before contributing to the story about Weiner’s victim.

At the time of this publication, BuzzFeed has changed its featured homepage story to “Why Aren’t There More Gay Superheroes?” from BuzzFeed Entertainment.