Talk radio titan Rush Limbaugh will probably consider his upcoming children’s book a success once he learns that the very idea of him doing such a thing has already made a CNN anchor “sick.” But based on his previous history as a best-selling author, upon its release October29, there is little doubt even more success is on its way. 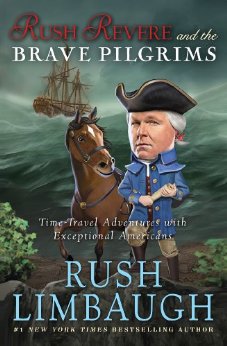 The book is advertised as a time-travel adventure and titled Rush Revere and the Brave Pilgrims: Time-Travel Adventures with Exceptional Americans. The Amazon description tells us Limbaugh has created the character of a “fearless middle-school history teacher named Rush Revere, who travels back in time and experiences American history as it happens[.]”

One of Rush Revere’s stops will be on the deck of the Mayflower.

Though he has written a number of book forwards and edits a monthly newsletter, Rush Revere will be the first published book Limbaugh has authored since 1992’s The Way Things Ought To Be and 1993’s See, I Told You So. Both were runaway bestsellers, hitting the top of the New York Times Best Seller list — the former for an extraordinary 24 weeks.

Writing a children’s book about exceptional Americans is not that big of a surprise. Limbaugh talks frequently about the importance of popular culture and education. A historical book aimed at kids hits both of those important sweet spots.

Fox News reports that it was Limbaugh’s wife who “nudged” him to do this and that the Rush Revere character could become part of a series of books:

Consumers of Limbaugh’s Two-If-By-Tea drinks will immediately recognize the character of Rush Revere.

According to Amazon, Rush Revere and the Brave Pilgrims is already available for pre-order and will be released in hardcover, Kindle, and as an audiobook CD narrated by Limbaugh.