On Wednesday morning, media outlets were running the story that President Donald Trump had failed to visit U.S. troops at Christmastime. By Wednesday afternoon, the media claimed Trump had made his visit to a war zone obvious in advance.

In between, media outlets that had earlier trumpeted Trump’s supposed non-visit to the troops were spinning the news that he had, in fact, visited by noting that it was his first visit to a war zone since taking office.

Left-wing Salon.com, for example, reported initially that Trump had failed to visit the troops during Christmastime, then changed its story and headline, but retained the anti-Trump spin.

“Trump sets new Christmas record: Finally makes first visit to combat troops,” it reported, adding that “Trump’s loyalty to his country has been called into question since the beginning of his presidency” because of allegations — still unfounded — of Russia “collusion.”

NBC News, which — as Breitbart News’ Matt Boyle noted — initially reported, falsely, that Trump had not visited U.S. troops during “Christmastime.” Later, NBC News reported the president’s “surprise” visit to U.S. troops stationed in Iraq, but highlighted that it was “his first journey to an active combat zone since he took office.” 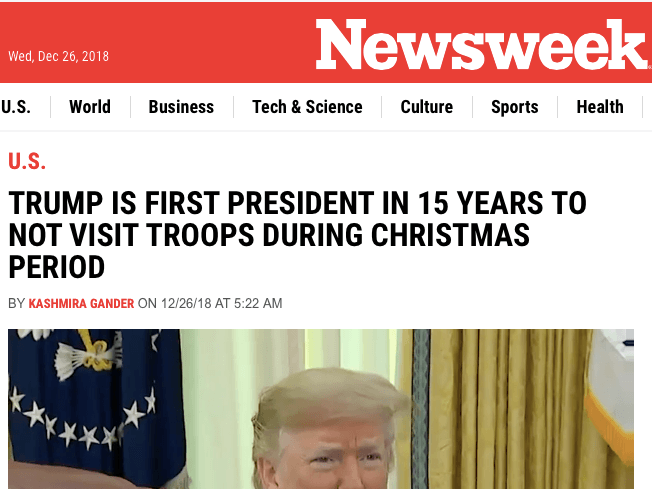 Politico, meanwhile, painted Trump as incompetent in a story titled, “How Trump gave away his secret war zone trip.” It explained:

After tweeting more than three dozen times over the last four days, Trump ceased his rapid-fire online missives on Tuesday night. By Wednesday, the president was nowhere to be found, without any scheduled public events. There was no uniformed Marine standing outside the West Wing, normally an obvious signal that the president is in the Oval Office. White House officials went silent. Soon, amateur aircraft watchers were tracking a Boeing VC-25, the military plane that serves as Air Force One, flying over Europe.

Politico, which reported White House claims that the trip had been planned for six weeks, stated that President Trump “can’t seem to keep a secret” — though it added: “Despite all the rumors, the specifics of Trump’s trip were closely held.”

The article did not address the false reports in several other media organizations that Trump had no visit planned.