Some Democrat senators on Thursday came out in support of President Joe Biden’s 2024 presidential bid despite objections from their allies in the establishment media.

Yet many establishment media outlets have issued warning that Biden should not run in 2024, citing age, lack of excitement, and failing track record.

“Let me put this bluntly: Joe Biden should not run for reelection in 2024. He is too old,” a Thursday Atlantic article read. “Yes, he’s fit to be president right now. But he should skip the next election.”

When Sen. Jon Tester (D-MT) was asked if he would support a second presidential campaign from Biden, the senator predicted if Biden does not run, it will “make a lot of happy TV stations” with increased ratings.

“I think this is Joe’s decision and I think if he runs, he’ll get plenty of support. And if he decides not to, look out Nellie! There will be a lot of happy TV stations,” Tester said.

Tester’s conjecture may be true, but it seems the Democrat-allied media have already sided against Biden’s 2024 bid. On Monday, Axios published a story entitled “American gerontocracy,” which stated that “Democrats now are privately debating whether Biden, already the oldest president, will be fit to run for reelection.”

On Saturday, the New York Times, also Democrat-allied, published a damning article that called into question Biden’s 2024 “political viability” because the nation “is completely falling apart.”

The Times reported “regret and anxiety” among Democrats who fear Biden may run again in 2024.

“As the challenges facing the nation mount and fatigued base voters show low enthusiasm, Democrats in union meetings, the back rooms of Capitol Hill and party gatherings from coast to coast are quietly worrying about Mr. Biden’s leadership, his age and his capability.”

The establishment media’s opinion may be taking hold within the Democrat party. Not all Democrat politicians are supporting a second Biden campaign. Rep. Alexandria Ocasio-Cortez (D-NY) on Sunday refused to say if she would support Biden in 2024.

“So we’ll cross that bridge when we get to it,” AOC told CNN. “But I think if the president has a vision, then that’s something certainly we’re all willing to entertain and examine when the time comes.” 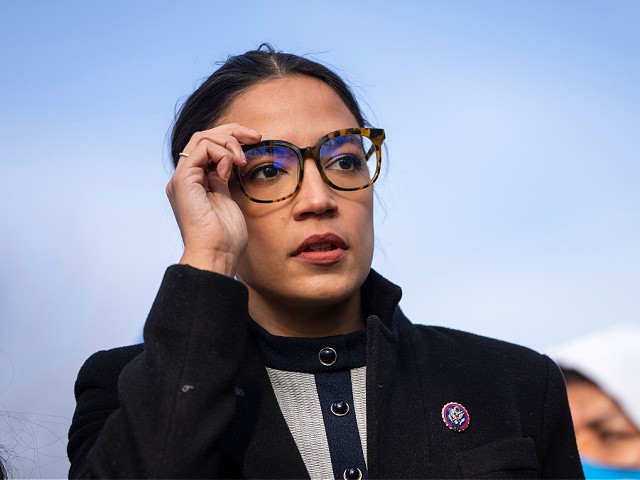 Rep. Alexandria Ocasio-Cortez (D-NY) prepares to speak during a rally for immigration provisions to be included in the Build Back Better Act outside the U.S. Capitol December 7, 2021, in Washington, DC.  (Drew Angerer/Getty Images).

The White House has downplayed Democrat infighting over Biden’s potential 2024 bid, claiming the president will run for a second term, perhaps because if it did not, Biden’s political capital would be reduced.

“That is not a question that we should be even asking,” White House press secretary Karine Jean-Pierre responded to CNN about the media’s opposition to a second term of aging Biden. “Oh, my gosh, he’s the President of the United States, you know, he — I can’t even keep up with him.”