The company, ResumeBuilder.com, surveyed 1,000 hiring managers across the United States in November  “to find out how many believe “reverse discrimination” is really an issue affecting their workplace,” the company said on November 7:

1 in 6 have been asked to deprioritize hiring white men

48% have been asked to prioritize diversity over qualifications

70% believe their company has DEI initiatives for appearances’ sake 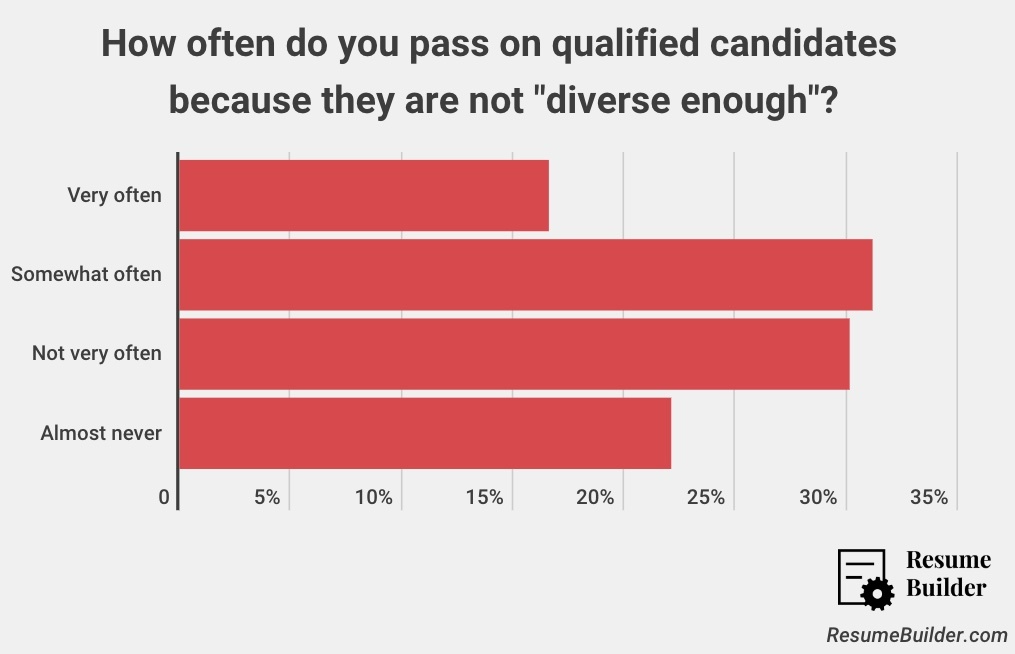 The “DEI” term is a variant of the Diversity, Inclusion, and Equity agenda pushed by executives and woke HR staffers in many companies.

The survey was launched by ResumeBuilder, and conducted via the Pollfish polling company:

This survey was commissioned by ResumeBuilder.com and conducted online by the survey platform Pollfish on November 2, 2022. In total, 1,000 participants in the U.S. were surveyed. All participants had to pass through demographic filters to ensure they were age 18 or older, currently employed for wages or self-employed, and manage at least 25% of the hiring at their workplace. For full survey results, please contact pr@resumebuilder.com.

ResumeBuilder.com did not respond to questions from Breitbart News.

Federal officials use court-enforced civic regulation — dubbed “civil rights law” — to grow the number of non-white people and immigrants in jobs sought by Americans, including many white job-seekers.

For example, the federal government penalizes companies that try to hire native-born Americans, and it usually ignores Fortune 500 companies that discriminate against Americans to hire non-white immigrants. In October 2021, the federal government imposed a very small fine of $14 million on Facebook amid evidence the company’s HR managers routinely used the federal visa-workers rules to preferentially hire cheap and compliant foreign workers instead of skilled American professionals. 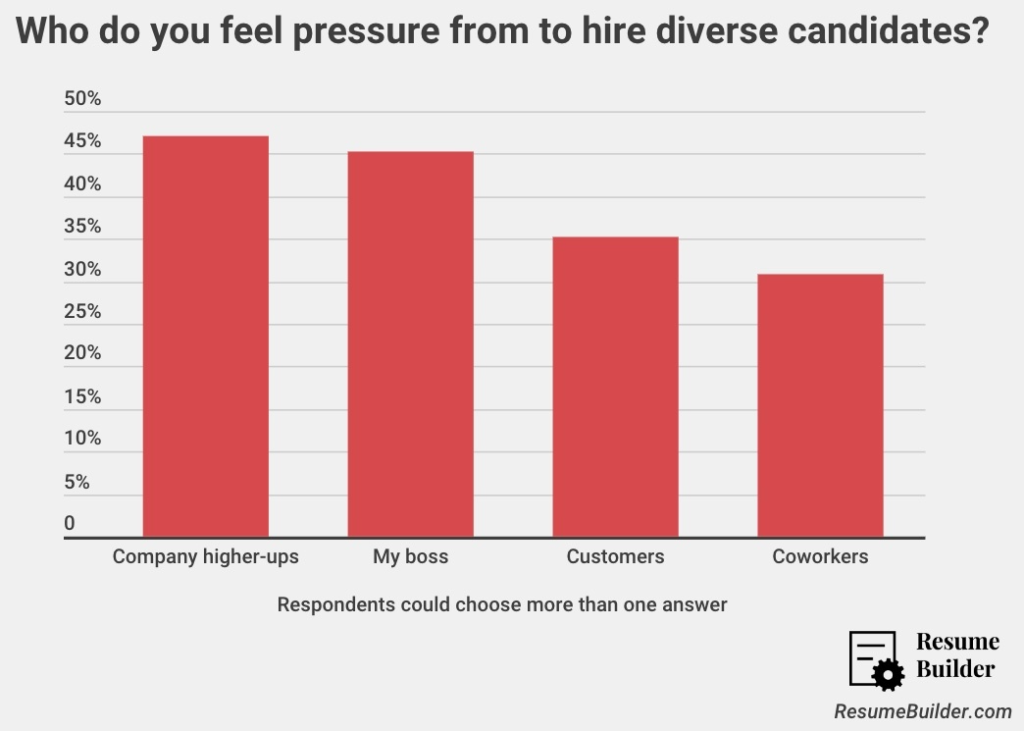 In turn, that federal diversity goal is enforced by executives and by “woke” managers in company H.R. departments.

… companies including Adidas AG, The Boeing Co., and Alphabet Inc.’s Google promised to increase their hiring of people of color and promote better inclusion, in the wake of escalated racial tensions that followed the death of George Floyd in Minneapolis this summer.

Quotas and hiring preferences that exclude groups based on race or sex generally are illegal under Title VII of the 1964 Civil Rights Act. But diversity efforts, when done correctly, don’t need to be abandoned because of the fear of potential “reverse” discrimination liability, attorneys say.

Max from Philadelphia told Breitbart News about his circumstances in a Fortune 500 company:

One guy is from China, the entire rest of the department is from India. … [and] all of our project managers are offshore in India now … [and] We’re starting to just hire more and more people in India.

In a prior job, Mike said, the flow of migrant workers allowed executives to push American professionals out of well-paid jobs:

That manager … told me “[Max], this is just the [strategy]: We treat you like crap, we don’t give you raises, we wait for you to either quit or to lose your temper. You lost your temper. We get to fire you. It’s just a game.” He literally told me those words.

The result is widespread underemployment among skilled American graduates, according to a September 2021 report by the Census Department.

The vast majority (62%) of [American] college-educated workers who majored in a STEM [science, technology, engineering and math] field were employed in non-STEM fields such as non-STEM management, law, education, social work, accounting or counseling …The path to STEM jobs for non-STEM majors was narrow. Only a few STEM-related majors (7%) and non-STEM majors (6%) ultimately ended up in STEM occupations.

The widespread replacement of Americans during the past 20 years had kept salaries flat, while also helping to spike stock values for Fortune 500 companies.

The inflow of foreign workers also changes the politics in Americans’ workplaces. The cliquish foreign workers — including foreign-born HR staffers — often try to get Americans fired so they can quietly sell the job to someone in their ethnic network, according to comments from several American tech workers. The skewed, non-professional politics of the so-called “green-card workforce” has deeply damaged companies such as Intel, Boeing, and Theranos.

This is just one floor of Walmart out 3 floors where 1000 and 1000 opt(bentonville, AR)students(mostly fake) are working under 20 to 30$/h and killing white color jobs.
TCS, COGNOZANT, INFOSYS,only hire Indians. How many more proof do we need. ? pic.twitter.com/PquTPhXWYE