In a statement on Sunday, Susan Arnold, chairman of Disney’s Board of Directors, announced Chapek has stepped down from his position as head of the company and former CEO Bob Iger would be returning from retirement to take back the reins of power.

“We thank Bob Chapek for his service to Disney over his long career, including navigating the company through the unprecedented challenges of the pandemic,” the statement said. “The Board has concluded that as Disney embarks on an increasingly complex period of industry transformation, Bob Iger is uniquely situated to lead the Company through this pivotal period.”

As noted by The Hollywood Reporter (THR), Chapek exited after signing a multi-year contract in June despite a turbulent year of leadership, during which he plunged the company deep into woke politics by opposing Florida’s anti-groomer law that barred teachers from discussing sexuality with third-graders.

The move proved disastrous on Chapek’s part when the state of Florida stripped Disney of its special tax jurisdiction that essentially allowed it to function like a city government.

On the content front, Chapek’s Disney took the political posturing even further, whether it was casting a trans “non-binary” actress in Marvel’s Ironheart or including a same-sex kiss in a children’s movie like Lightyear, which bombed at the box office.

Shares of the Walt Disney Co. plummeted late Tuesday and into early Wednesday to their lowest level in nearly a decade as concerns mount over the company’s profitability and wild spending habits on Disney+ and other streaming services. https://t.co/MiQhdlv97F

The Disney brand became so undeniably toxic in recent months that the company’s bottom line fell out right from under it, leading to layoffs, drops in stock prices, and overall negative employee morale.

In a letter to employees at the time, Disney CEO Bob Chapek said that the company will be making “tough and uncomfortable decisions.” 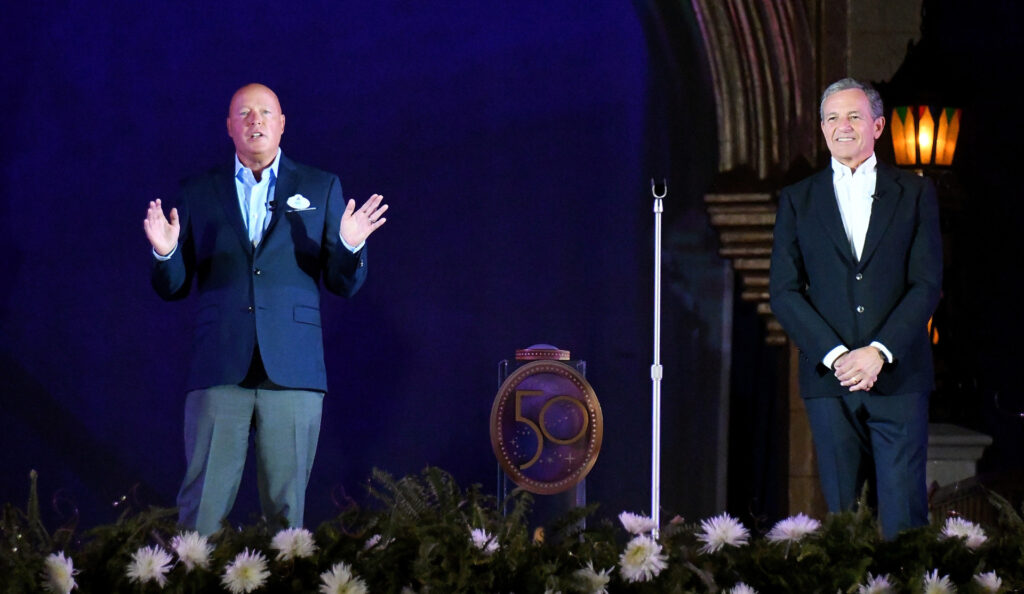 “I am fully aware this will be a difficult process for many of you and your teams. We are going to have to make tough and uncomfortable decisions. But that is just what leadership requires, and I thank you in advance for stepping up during this important time,” he wrote.

Iger will reportedly serve as CEO of Disney for another two years “to set the strategic direction for renewed growth” as a new successor develops, according to the Board.

“I am extremely optimistic for the future of this great company and thrilled to be asked by the Board to return as its CEO,” Iger said in a statement.

Disney employees are reportedly in a state of confusion over the company’s plan to move 2,000 workers to Florida from California, and they are blaming CEO Bob Chapek for the “chaos.” https://t.co/MW4FvHZnaD

“Disney and its incomparable brands and franchises hold a special place in the hearts of so many people around the globe—most especially in the hearts of our employees, whose dedication to this company and its mission is an inspiration.

“I am deeply honored to be asked to again lead this remarkable team, with a clear mission focused on creative excellence to inspire generations through unrivaled, bold storytelling,” he added.