Eyewitnesses in Gaza have confirmed Israel’s account that rockets fired by the Palestinian Islamic Jihad terror group were responsible for the deaths of several Palestinians, including children, after they fell short of their target during last week’s three-day conflict.

“I was with my wife and children in my house when we heard the sound of a huge explosion. Two minutes later, I looked out the window and saw a horrible scene. A house nearby was destroyed,” Abdul Rahman, a Jabaliya refugee camp resident told AFP.

One of the rockets fired at Israel “landed on the house,” he said.

Souha, another resident of Jabaliya, said that “it’s a war and there are mistakes of the occupation and the resistance,” in reference to Israel and the PIJ.

“But the reason for the war is still the occupation,” added the woman, who “saw a rocket fall on [her] neighbors’ house.”

Souha declined to give a second name, out of concern for her safety from the terror rulers running the Strip.

According to the Hamas-run health ministry, 49 Palestinians were killed in the conflict, 17 of them children. Israel said that at least twelve of the children, and many more of the adults, were killed by errant PIJ rockets.

The PIJ fired more than 1,100 rockets into Israel, of which 200 fell short of their target and fell within the Gaza Strip.

In a rare acknowledgement of defeat, PIJ members admitted the operation had a grave impact on the terror group. 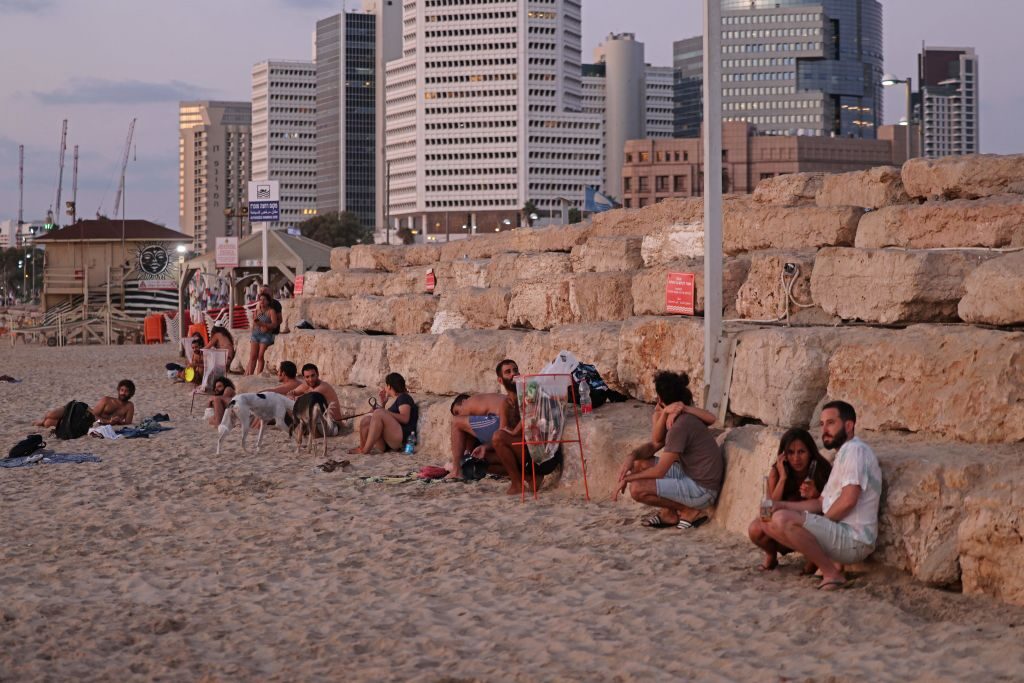 Beachgoers take cover in the Israeli coastal city of Tel Aviv after rockets were launched from the Gaza Strip, on August 7, 2022. (MENAHEM KAHANA/AFP via Getty Images)

PIJ’s Ahmed al-Mudallal, whose son Ziad was killed alongside senior commander Khaled Mansour, told AFP: “This round was difficult. We lost many major military leaders that were important to us.”

However, another senior Islamic Jihad leader boasted that the commanders killed were replaced “within minutes,” the report said.

Some Palestinians even publicly castigated PIJ on social media for the misfired rockets.

Human rights activist and Gaza analyst Muhammed Shehada said the misfired rockets were longer-range, meant to target Israel’s coastal city of Tel Aviv in the center of the country.

“They (PIJ) have tried to improve the range and explosive power of their rockets — but not with a solid scientific base,” said Shehada.

“The ones that went beyond 40 kilometers (25 miles) were not mechanically or technically savvy. They were the ones that fell back to Gaza,” he said.

The rocket issue brings “immense frustration and bitterness with the wider Gazan people,” he added.

The Hamas leadership, which runs the Gaza Strip, were angry at what they said was PIJ’s recklessness, a senior member in the West Bank told AFP.

More Palestinians died in the recent conflict between Israel and Gaza by botched rocket launches by Gaza terrorists than from Israel Air Force strikes. https://t.co/NeQjtKIT84

“Hamas has offered repeatedly to Islamic Jihad to help design and improve the rockets, but Jihad always say they have it under control,” said Shehada.

Unlike past conflicts, PIJ had no trophies after the conflict ended, Shehada said. Before the Egyptian-brokered ceasefire came into effect on Sunday night, and minutes after it was called, PIJ made a last ditch attempt to bag some Israeli casualties by sending a salvo into Israeli cities, but failed.

Neither did they get anything in return for agreeing to the ceasefire.

“Usually Hamas would agree on a ceasefire with some tangible deliverable to the people of Gaza,” he told AFP. “This doesn’t offer anything.”