Multiple officials have identified the alleged truck driver who mowed down pedestrians Tuesday in lower Manhattan, killing eight and injuring about a dozen more, as 29-year-old Sayfullo Habibullaevic Saipov.

Officials are calling the incident “an act of terror.”

NBC News: Suspect in the New York City attack is Sayfullo Habibullaevic Saipov. He was born in February of 1988. Came to U.S. in 2010.

According to many witnesses, Saipov shouted “Allahu Akbar” upon exiting a Home Depot rental truck after intentionally driving the wrong way on a busy bike lane near the World Trade Center — the site of the deadliest terror attack on U.S. soil. After striking several people, witnesses say he “crashed deliberately into a school bus carrying at least three children,” CNBC reports. Leaving his vehicle with two imitation guns, he was shot in the abdomen by police, according to NYPD. 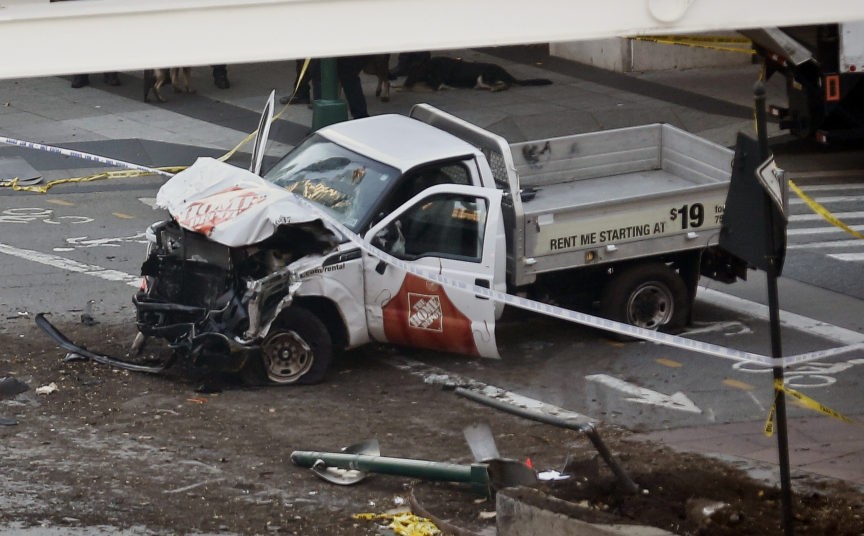 Saipov was reportedly taken to Bellevue Hospital and is in police custody. A paintball gun and pellet gun were recovered at the scene, according to law enforcement officials.

Six of the victims — all men — were pronounced dead at the scene, while two died later, Police Commissioner James O’Neill said.

This is a developing story. All times eastern.

Foreign ministers say 5 Argentines and one Belgian among the dead in NYC bike path attack, with others injured. https://t.co/avLiNPWRdG

NYC Trade Center lit up in red, white, and blue.

NEW: Pres. Trump says he has ordered DHS 'to step up' Extreme Vetting Program. "Being politically correct is fine, but not for this!" pic.twitter.com/aLrIHISuTo

Update 9:14 pm:
The suspect has a girlfriend and three children.

From the Associated Press:

NEW YORK (AP) — The Latest on a vehicle driving onto a bike path near the World Trade Center site and memorial (all times local):

New York Gov. Andrew Cuomo (KWOH’-moh) has increased security at airports, bridges, tunnels and mass transit systems around the state following a vehicle attack on a bike path near the World Trade Center.

The Democratic governor has directed the lights on the spire of 1 World Trade Center be lit in red, white and blue in honor of freedom and democracy. He says additional security personnel are being deployed to high-density areas and large public gatherings.

Reaching a new low, the alleged suspect chased toward children after crashing his truck into the school bus.

The Latest: 2 NYC schools staff members, 2 students injured after their bus was struck by truck in bike path attack. https://t.co/1vPu7Dvgbf

NEW: A note that referenced ISIS was found in or near the truck used in NYC attack, federal law enforcement source confirms to CBS News.

A Belgian national has been identified as a victim. Didier Reynders, Deputy Prime Minister and Foreign Affairs Minister for Belgium, tweets his condolences…

The FBI’s Joint Terrorism Task Force is taking over the lead of the investigation, according to CNN.

President Trump is tweeting again, sharing his thoughts and prayers for the victims of the terrorist attack and warning against the threat of the Islamic State.

My thoughts, condolences and prayers to the victims and families of the New York City terrorist attack. God and your country are with you!

We must not allow ISIS to return, or enter, our country after defeating them in the Middle East and elsewhere. Enough!

There are multiple reports that Saipov is from Uzbekistan.

Latest: Sources tell CNN New York terror suspect is 29 year old from Uzbekistan who came to the U.S. in 2010, resides in Florida.

In April, an Uzbek national was behind the Stockholm terror attack. Rakhmat Akilov, a 39-year-old with ties to the Islamic State, drove a hijacked truck into a crowd of people, killing four people and wounding 15, in an eerily similar terror plot.

MORE: @SenSchumer: "The scourge of terrorism is unfortunately still with us, and we must remain vigilant as ever." https://t.co/ubpkrdwfhp pic.twitter.com/QlL4nzOIi9

“The President has been briefed on the incident in NYC by CoS Kelly and will be continually updated as more details are known. Our Thoughts and prayers are with all those affected.”

Despite officials calling the event an act of terror, Facebook is just labeling it “The Violent Incident” in its Safety Check feature.

In NYC, looks like another attack by a very sick and deranged person. Law enforcement is following this closely. NOT IN THE U.S.A.!

At a press conference, De Blasio confirms that, based on the information available, this was an act of terror. He also gave an updated casualty count: 8 deaths.

I'm with Commissioner O'Neill and Governor Cuomo in Lower Manhattan with an update on this afternoon's incident. https://t.co/7000xigDge

“This was an act of terror, and a particularly cowardly act of terror aimed and innocent civilians, aimed at people going about their lives who had no idea what was about to hit them,” said De Blasio. “We, at this moment … know of 8 innocent people who have lost their lives and over a dozen more injured. We know that this action was intended to break our spirit, but we also know New Yorkers are strong, New Yorkers are resilient, and will not be moved by an act of violence.”

“I want to ask all New Yorkers to be vigilant. We know its Halloween night and in the days ahead people will be uneasy,” he continued.

After De Blasio spoke, Governor Cuomo spoke, reiterating there is no ongoing threat:

“It reminds us how precious life is… that shock and that pain is going to be very real… our first responders did an extraordinary job… the new terrorist tactic which they called for publically are these lone wolves who commit an act of terror. This is very preliminary … but at this moment there is no evidence to suggest a wider plot or wider scheme… the actions of one individual who meant to cause pain and harm and probably death, and the resulting terror, and that was the purpose. We will be vigilant, more police everywhere, you’ll see them in the airports, you’ll see them in the tunnels, it’s not because there is any evidence of any threat.”

Images from the Associated Press press show a body covered under a white sheet next to a bike. 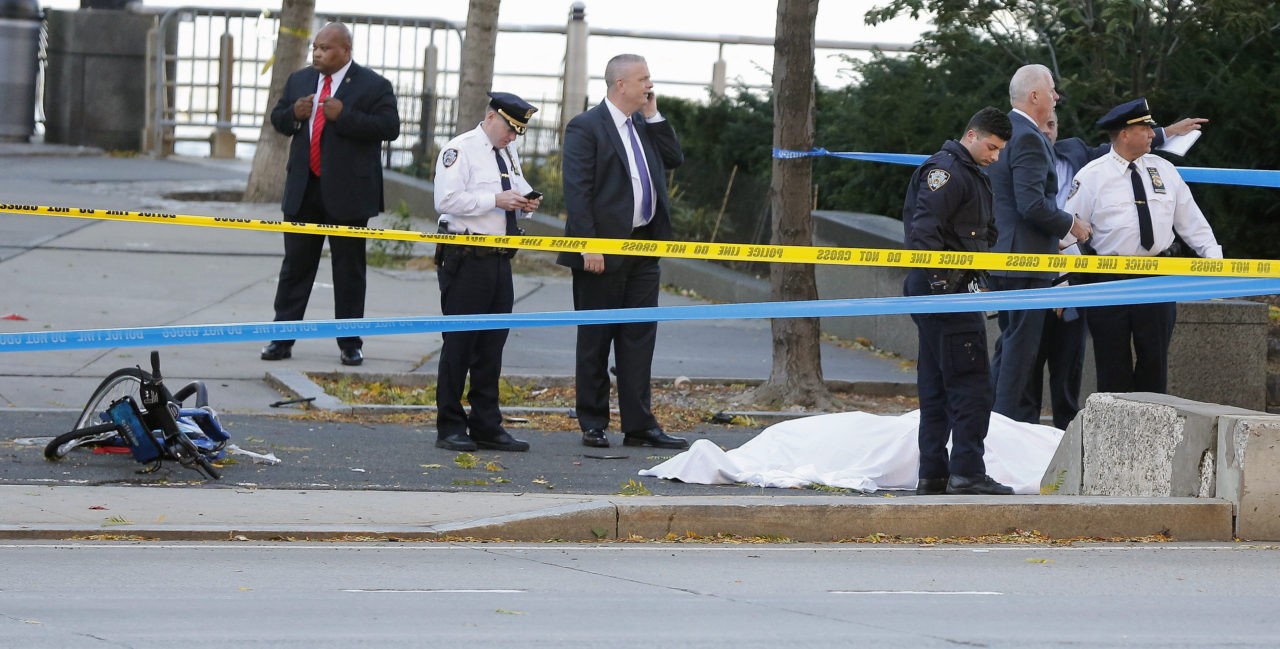 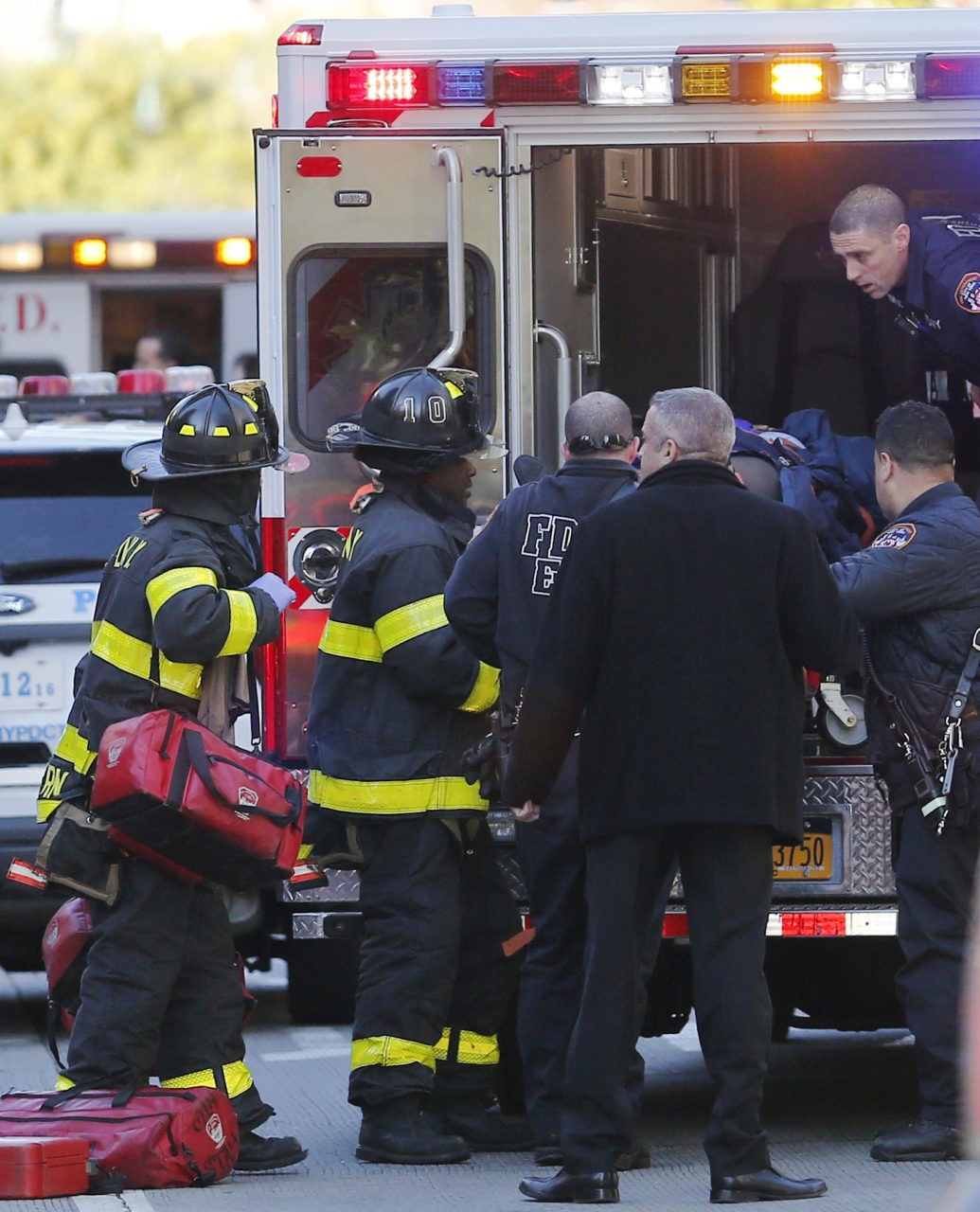 The suspect is being described as a Middle Eastern male in his mid-30’s with a Florida ID.

Suspect had a #Florida ID and had rented @HomeDepot truck outside NYC, according to @nbcnewyork.

CBS News confirms with @HomeDepot that the suspect in the “deliberate” attack in lower Manhattan was driving a Home Depot rental truck.

The Mayor and NYPD will give an update on the incident in Lower Manhattan at approximately 5:15. We will stream it here.

Law enforcement sources confirm to Breitbart News’ John Carney that the police are investigating this as a terrorist incident.

More details are emerging from NYPD:

The vehicle continued south striking another vehicle. The suspect exited the vehicle displaying imitation firearms & was shot by NYPD

Officials are saying as many as six people have been killed and 11 injured.

The suspect was shot twice by law enforcement after he was stopped on a bike path by a school bus that got in the way, according to Fox News.

From the Associated Press: “Police and witnesses say a motorist drove onto a busy bicycle path near the World Trade Center memorial and struck several people, then emerged from the vehicle screaming and firing something that appeared to be a gun.”

An Associated Press photographer on the scene Tuesday witnessed at least two bodies lying motionless on the path beneath tarps.

The New York Police Department posted on its Twitter feed that one person was in custody. The department says it’s unclear whether anyone was shot.

A man who was riding in an Uber along the West Side Highway near Chambers street says he saw several bleeding people on the ground after a truck struck several people.

A witness said the truck had also collided with a small bus and one other vehicle.

According to Fox News, the FBI is responding to the scene.

I have been briefed with preliminary information on the situation in Lower Manhattan and am heading to the scene.

The Mayor is en route to the scene of the incident in Lower Manhattan.

No information on the suspect has been released at this time.

The New York Police Department reports it has one suspect in custody.

Currently there is one person in custody. No others outstanding. All information is preliminary as the investigation is ongoing. pic.twitter.com/nsaUgZ8MJH

According to NBC News, multiple people have been killed.

BREAKING: Multiple people are dead and several are injured following an incident in lower Manhattan, per a senior New York City official