Sen. Tom Cotton (R-AR) remarked on Thursday’s edition of the Breitbart News Daily podcast with host Alex Marlow that manufactured American decline is deliberately imposed by the Democrat Party and the broader left.

Cotton reflected on his latest book, Only the Strong: Reversing the Left’s Plot to Sabotage American Power, in highlighting the left’s broad antipathy to the United States, with particular hostility towards the Constitution’s consecration of human freedoms and commensurate restrictions on and divisions of state power. He linked the left’s ideological contempt for America with national deterioration driven by Democrats.

He stated, “It’s not Joe Biden’s bad luck that he happened to be an office when we have 13 percent inflation or gas at five or even six dollars a gallon in some states. The sense of decline most Americans have is, again, not an accident. It’s not unintentional. It’s decline by design.”

“The progressive left — going back a hundred years — is at best ambivalent about America,” he said. “Many are openly critical or even hostile to America, but they’re all hostile to the sources of American power: a strong military; a strong, prosperous, growing economy; American energy production and independence; sovereign borders and freedom of action in the world; standing up for friends; standing up against adversaries like China.”

He continued, “You see, it starting with Woodrow Wilson, the first president to openly repudiate our founding, openly critical of the Declaration and the Constitution in a way that no president would be today.”

He concluded, “Down through the ages, every time a progressive Democrat takes the White House, they’re pursuing policies that undermine the sources of American power, and it’s only gotten worse with Bill Clinton and especially Barack Obama — the most ideological man to be president since Wilson — and Barack Obama’s understudy, Joe Biden.” 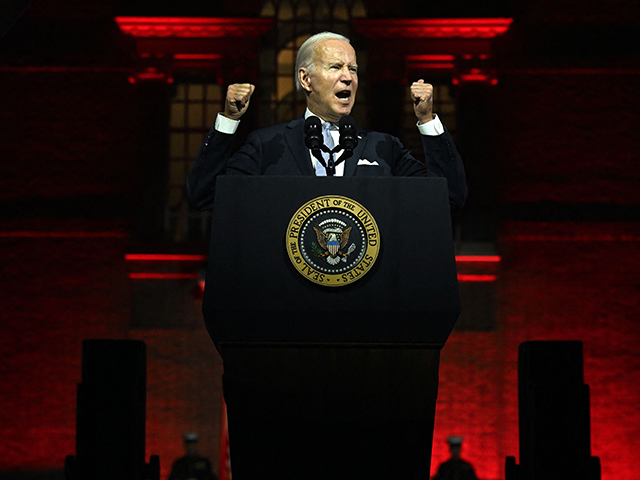 Cotton linked the left’s contempt for America’s founding with its ideological fantasy of a malleable human nature. He noted that the left’s pursuit of utopian visions and perfecting the human condition provide philosophical foundations for endless centralization of power and governmental control.

He remarked, “A fundamental premise of the progressive movement was that our Founders had lived in a time-bound era, they couldn’t see over the horizon that scientific and technological progress was coming, that Darwin was going to reorient the scientific world. They had this foolish idea that we had God-given natural rights, that we had a fixed human nature that never changed.”

Cotton alluded to neo-Marxist perceptions of historical materialism and rejection of timeless universalities of the human condition.

“The progressives knew better,” Cotton added sarcastically. “They knew that everything was historically time-bound, that man’s nature would change, that we would therefore improve morally, not just scientifically and technologically, and that you could perfect human nature and ultimately, therefore, perfect society.”

He concluded, “You could achieve utopia or return to the garden. You didn’t need foolish things like the separation of powers, and checks and balances, and federalism. That’s why Wilson is really the patron saint also of the vast administrative state we have today, where supposedly neutral, non-partisan scientific experts could carefully calibrate all of the various conflicts, or the tensions, or the needs of our society, as opposed to people’s elected representatives doing so with those critical constitutional curbs on them.”