The Department of Homeland Security has released data showing how former President Barack Obama gave work permits to at least 2.3 million migrants for U.S. jobs in 2016.

The award of 2.3 million work permits was added to the 2016 inflow of roughly 1.1 million new legal immigrants and roughly 500,000 outsourcing visa workers, such as the H-1B white-collar workers. The combined inflow delivered 4 million legal foreign workers to Americans’ economy in 2016, just as 4 million young Americans turned 18 and began looking for decently paid jobs.

The new data was released by the DHS as part of its new effort to implement President Donald Trump’s new pro-American policies. The data can be seen at a webpage headlined “Buy American, Hire American: Putting American Workers First.”

The spike in migrant labor shows that Obama’s deputies “raised the art of bypassing Congress and abusing executive authority to a new level,” said Jessica Vaughan, policy director at the nonpartisan Center for Immigration Studies. “Most members of Congress ….. [and] people are completely unaware of this third pipeline of [foreign] labor,” she added.

The foreign inflow has a large impact on blue-collar and white-collar Americans. For example, one Ohio-born American software expert told Breitbart News that:

I have lost my job as part of a mass layoff four times. Three times were directly due to outsourcing and the other was because my security clearance did not come through … because of my finances over a finite period of time … [The] bank foreclosed on my house of ten years in the neighborhood where I grew up, near family. Bank would not work with me. House was sold at auction below market value…. Found job in NJ and stayed in a motel room for about six months until after Hurricane Sandy. We were kicked out when the demand for motel rooms increased significantly … I could not afford to keep my job anyway. My expenses exceeded my salary.

The expert has a master’s degree in computer engineering and an 11-year-old daughter. She declined to have her identity revealed because she fears being blacklisted.

My daughter has lived in five states in six year years (2009-2014, OH,MD,NJ,TX,NC) between the age of 6 and 11, impressionable years, because of my forced job search due to outsourcing … I don’t know how I will be able to afford college for my daughter. She is very bright, an ideal candidate. Outsourcing has cost my family literally hundreds of thousands of dollars, between the loss of income, job search and relocation expenses, secondary financial impacts, and the destabilization of my family.

The massive inflow of foreign workers ensures that Americans are often frozen out of workplaces, she said:

The significant majority of IT workers [in North Carolina] is from India, some from Phillipines and China. So many that they chattered among themselves in the work area right beside American team members who did not speak/understand their language. Foreign managers and project leaders promoted foreigners at the expense of Americans, to the point of sabotage, in order to send work to foreigners. American workers were virtually immersed within a group of people with work visas from India who spoke very broken English and did not add any above-average value. IT Departments are easy to spot because they look like little India. I was usually the only American on my group IT projects.

The inflow of foreign labor annually transfers roughly $500 billion from American employees to employers and investor, reduces the use of wealth-boosting labor-saving technology and likely adds to the growing gap between ordinary Americans and the wealthy.

For example, a recent study shows that fewer young Americans are pushing themselves up the income scale by the end of their careers. “The probability of ending where you start has gone up, and the probability of moving up from where you start has gone down … For whatever reason, there was a path upward in the earnings distribution that has been blocked for some people, or is not as steep as it used to be,” said Michael D. Carr, an economist at the University of Massachusetts in Boston and the co-author of a new study. The academic paper is titled, “The decline in lifetime earnings mobility in the U.S.: Evidence from survey-linked administrative data,” but the Atlantic magazine summarized the paper as “Poor at 20, Poor for Life.”

Obama’s support for foreign workers highlights the progressives’ globalist claim that foreigners have similar rights as Americans — including the right to live in the United States. In November 2014, Obama told his supporters and the inattentive establishment media that:

Sometimes we get attached to our particular tribe, our particular race, our particular religion, and then we start treating other folks differently. And that, sometimes, has been a bottleneck to how we think about immigration.  If you look at the history of immigration in this country, each successive wave, there have been periods where the folks who were already here suddenly say, ‘Well, I don’t want those folks’ — even though the only people who have the right to say that are some Native Americans.

Each year, 4 million Americans turn 18 and join the workforce of 152 million other Americans in search of well-paying jobs. But Obama’s government hurt young Americans’ by expanding the labor supply via several mechanisms:

Annually providing green cards to roughly 1 million legal immigrants, 90 percent of whom will enter the workforce. The current population of legal immigrants in the United States is roughly 30 million.

Ordering immigration officials to largely ignore the population of roughly 8 million established or recent illegal immigrants. Roughly 40 percent of the illegals are “overstays” who did not leave the country when their tourist visas and work permits expired.

In contrast, Trump is developing a new merit-based immigration reform to aid young Americans by trimming the inflow of foreign workers into the U.S. economy. However, his proposals are opposed by many business groups which want to import new consumers and extra workers.

Many of EAD recipients can annually renew their documents for several years. Many eventually go home and roughly 500,000 graduate each year to green cards, which provide them with long-term work permits and a path towards citizenship.

The 2016 EADs were given to 58 complicated categories of migrants and foreign workers, including 190,000 people admitted under Temporary Protected Status rules, 72,000 new refugees, at least 200,000 foreign students, and to at least 250,000 people who are trying to extend their temporary visas.

The new work-permit data exposes the scale of the migrant EAD workforce but still leaves much complexity and uncertainty.

Some of the EAD documents last more than one year, bumping up the total number of resident foreign EAD workers. For example, the DHS data showed that 186,902 younger illegal immigrants were given Obama’s “DACA’ two-year EAD work permits in 2016 — but another 514,678 were given two-year permits in 2015. Combined, those two-year EADs created a legal workforce of 700,000 DACA illegals in 2016, boosting the EAD workforce to at least 2.3 million in 2016.

According to David North, an expert at the CIS, the data shows an accumulated resident population of 4 million EAD workers:

The bottom-line numbers on the table showing the EAD issuances each year are misleadingly small because … the duration of EADs varies widely among the 58 subsets of them. Asylum applicants and DACAs used to get one-year EADs, now they run for two years. TPS EADs routinely run 18 months, and many others last as long as the underlying immigration status, which can extend for decades. OPT workers’ EADs last either one year or three years.

Some DHS data is contradictory. The new data shows that 200,000 foreign students were given “Occupational Practical Training” EADs in 2016 after they graduated from U.S. colleges. But data provided by DHS to Breitbart News in June showed that roughly 330,000 foreign graduates were given “OPT” work permits in 2016. If that higher number is correct, Obama pushed the resident 2016 population of EAD workers to at least 2.4 million.

Some of the 2016 EADs were given to illegal immigrants whom the Obama administration declined to send home. In 2016, 32,264 illegal aliens with a “Final Order of Deportation” were allowed to stay and work by the administration. Some of those working illegals were from foreign states that refused to accept their repatriated citizens. SInce January, Trump’s deputies have successfully pressured several foreign nations to accept their deported citizens.

Many outsourcing workers, such as H-1Bs, can get EADs when their visas expire. Under existing law, companies are allowed to request green cards for 140,000 visa workers and their families each year. Once an outsourcing worker is approved for one of the 140,000 green cards, he continued working by getting EADs until they eventually get their green card, perhaps several years later. Without the EADs, nearly all of the H-1Bs would return home.

Many EADs are awarded via myriad smaller visa programs. For example, 8,069 EADs were given to people in 2016 who have been approved to get one of the 10,000 “U Visas” granted each year to foreign witnesses of domestic crime. Another 2,264 EADs were given to foreigners who say their American spouse abused them.

Trump’s new pro-American policies will trim the number of EAD workers in many of the smaller categories, said Vaughan. But the numbers will not drop much unless the administration uses its legal authority to curb the major programs, such as the H-1B, OPT, and DACA giveaways, she said.

“It is no wonder that there are such abysmal labor force participation rates among Americans because a lot of these people are working in jobs that Americans and legal immigrants don’t have access to,” she said. “It shows where the Trump administration needs to take action if it is truly concerned about having employers hire Americans.” 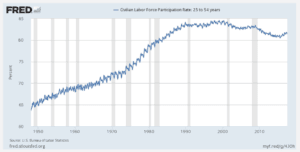 Many polls show that Americans are very generous, they do welcome individual immigrants, and they do want to like the idea of immigration. But the polls also show that most Americans are increasingly worried that large-scale legal immigration will change their country and disadvantage themselves and their children.

Four million Americans turn 18 each year and begin looking for good jobs. However, the government imports roughly 1 million legal immigrants to compete against Americans for jobs.

That Washington-imposed policy of mass-immigration floods the market with foreign labor, spikes profits and Wall Street values by cutting salaries for manual and skilled labor offered by blue-collar and white-collar employees. It also drives up real estate prices, widens wealth-gaps, reduces high-tech investment, increases state and local tax burdens, hurts kids’ schools and college education, pushes Americans away from high-tech careers, and sidelines at least 5 million marginalized Americans and their families, including many who are now struggling with opioid addictions.

Americans tell pollsters that they strongly oppose amnesties and cheap-labor immigration, even as most also want to favor legal immigrants, and many even sympathize with illegals.

Amid the huge inflow of new workers, wages for men have remained flat since 1973, and the percentage of working Americans has declined steadily for the last few decades.