President Donald Trump’s administration has launched a public campaign to push the Republican-controlled Congress to uphold the White House’s pro-American immigration agenda by ending extended-family immigration into the United States.

In a new campaign, the Trump administration is looking to educate the American public on the issue of mass, legal immigration while also pressuring Republicans in Congress—such as House Speaker Paul Ryan and Senate Majority Leader Mitch McConnell—to end the process by which new immigrants are currently allowed to bring an unlimited number of foreign relatives with them to the U.S.

This process, known more simply as “chain migration,” has imported more than 9 million foreign nationals to the U.S. just in the last decade, Breitbart News reported.

“Despite being a modern economy, the United States awards most of its green cards on an antiquated system of family ties, not skill or merit,” a White House official told Breitbart News in a statement. “This system of Chain Migration—whereby one immigrant can bring in their entire extended families, who can bring in their families and so on—de-skills the labor force, puts downward pressure on wages, and increases the deficit.”

“Chain Migration also undermines national security, by failing to establish merit-based criteria for evaluating entrants into the United States—instead, familial relations are all that is required to obtain a green card and, in turn, become a voting U.S. Citizen within a short period of time, with access to Federal welfare and government benefits,” the official said.

In a series of graphs, the White House explains the impact of chain migration on Americans, where every two new immigrants who enter the U.S. bring on average seven foreign relatives with them, Breitbart News reported. 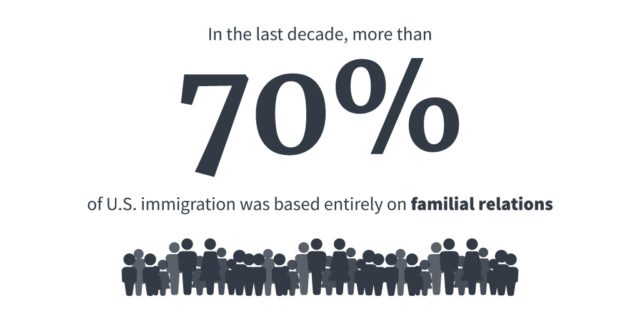 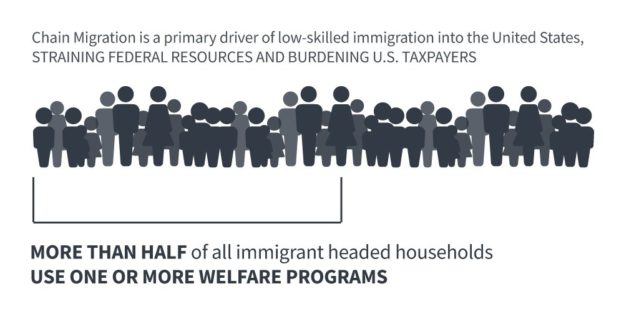 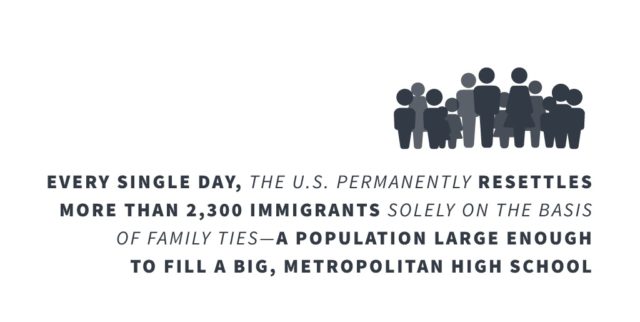 “As President, my greatest duty is to protect our nation and to protect our people,” Trump said in remarks at the FBI National Academy Graduation Ceremony. “As we have witnessed recently, America faces grave threats.  Terrorists have struck in the streets and subways of New York City twice in a few months.  Both terrorists came to our country through the dysfunctional immigration system that we are correcting, and rapidly.  And one came through chain migration…”

“We’re calling for Congress to end chain migration and to end the visa lottery system, and replace it with a merit-based system of immigration,” Trump said as the crowd applauded. “We want a system that puts the needs of American families, taxpayers, and security first.”

JUST IN: 27 y/o Terrorist who is from Bangladesh and was living in Brooklyn, told authorities “They’ve been bombing in my country and I wanted to do damage here, Terrorist was also a cab driver. pic.twitter.com/vhtfzadgoc

Since 2005, the U.S. has imported more than 140,000 Bangladesh nationals through chain migration, outpacing the population of Dayton, Ohio, Breitbart News reported.

In the last decade, 1.7 million chain migrants have entered the country from Mexico, with the average Mexican immigrant bringing roughly six foreign relatives with them to the U.S. Mexico sends more chain migrants to the U.S. than any other country.

Over the past ten years, these countries have sent the following number of chain migrants to the U.S.:

Chain migration has additionally allowed foreign relatives living in countries designated as state-sponsors of terrorism, such as Iran, Syria, and Sudan, to freely come to the U.S.

In total, chain migration has imported more than 117,000 foreign nationals from these three terrorist-funding countries since 2005, Breitbart News reported, including:

Despite repeated demands from Trump, Attorney General Jeff Sessions, and United States Citizenship and Immigration Services (USCIS) Director Lee Francis Cissna for the GOP-led Congress to end chain migration, the Republican leadership has yet to take the issue seriously.

For example, Sen. Tom Cotton (R-AR) and Sen. David Perdue (R-GA) introduced legislation known as the RAISE Act, endorsed by Trump, in August that would officially end chain migration, thus cutting annual legal immigration levels in half, taking them from more than 1 million immigrants a year to 500,000 a year. This move would raise wages for American workers and stabilize the U.S. population.

But, the RAISE Act has yet to even be brought up by the Senate Judiciary Committee.

Likewise, the SECURE Act, which introduced this month by a group of Senators led by Sen. Chuck Grassley (R-IA), would end chain migration, but ties the issue to giving amnesty to nearly 800,000 illegal aliens who have been shielded from deportation by the President Obama-created Deferred Action for Childhood Arrivals (DACA) program.

Though the SECURE Act was designed to be a compromise between the Trump administration and the Republican establishment, by giving DACA illegal aliens amnesty while also ending chain migration, the legislation was immediately shut down by Democrats and has not been pushed as even a remote possibility by McConnell.