Democrats from outside Georgia are actively engaged in an effort to create divisions among Republicans in the state.

The Democrats then intend to exploit those divisions to try to drive down turnout among President Donald Trump’s supporters in the runoff for the two U.S. Senate seats that will decide which party controls the upper chamber of Congress next year. Republicans, meanwhile, are pushing back on these efforts, calling them “deceitful campaign tactics” designed to “manipulate voters” in Georgia.

Really American PAC, a leftwing Super PAC that ran scores of attack ads against President Trump in the general election in 2020, is now crowdfunding on social media to fund billboards in Trump-supporter-heavy areas of Georgia to split Trump supporters from Sens. Kelly Loeffler (R-GA) and David Perdue (R-GA). Both GOP senators are headed to Jan. 5 runoffs in the state that will determine which party controls the U.S. Senate next year. As of now, next year Republicans will have 50 seats in the U.S. Senate and Democrats will have 48. These two seats will determine which party controls the Senate, and if the Democrats take both of them—and Democrat presidential candidate Joe Biden is successful in challenges from President Donald Trump to election results that currently have Biden leading Trump—then the Democrats would gain control of the chamber as the would-be Vice President Kamala Harris, now a Democrat senator from California, would be the tie-breaking vote.

As Trump is challenging the election results in Georgia and other states around the country, the Democrats are now trying to imply that Loeffler and Perdue have been insufficiently loyal to the president.

The billboards Really American PAC is seeking to post around Georgia explicitly state this in text that appears alongside images of Loeffler and Perdue: “Georgia Republicans Didn’t Fight For Trump. We Won’t Fight For Them.”

This revelation that key figures in the Democrat Party—who stand to benefit politically from a Democrat-controlled U.S. Senate if their candidates Jon Ossoff and Raphael Warnock defeat Perdue and Loeffler respectively—are behind these attempts to create such divisions comes as no surprise to Trump supporters, who are acutely aware that the president’s supporters are firmly behind the GOP candidates for U.S. Senate in Georgia in the runoffs.

In particular, as Breitbart News reported earlier on Monday, Donald Trump Jr.—President Trump’s eldest son—put to bed any suggestion that Trump supporters should be thinking about sitting out the runoff elections in Georgia.

I’m seeing a lot of talk from people that are supposed to be on our side telling GOP voters not to go out & vote for @KLoeffler and @PerdueSenate.

We need ALL of our people coming out to vote for Kelly & David.#MAGA #GASEN

In response to the Breitbart News article, some of those on the right who had been hyping these concerns about Republicans sitting out the election—like activist Ali Alexander, who’s been behind many of the #StopTheSteal rallies around the country—assured followers there is no division and Trump supporters will rally behind Loeffler and Perdue.

We will all work this out 🇺🇸 https://t.co/rWNDXX7HlF

We will all be on the same page by Jan 5th. Don’t attack Don Jr, Lin, me or anyone rowing in the same general direction. I don’t have time for people cashing in past personal vendettas. If you want to boost GOP Turnout take any action to secure our elections NOW! #ProTip ONWARD🇺🇸

Nationally syndicated radio host Rush Limbaugh also suggested on his program on Monday that Trump himself should head to Georgia to rally with the GOP Senators, as Vice President Mike Pence already has since the election. and others in Trump’s orbit have or intend to do soon.

The idea that Loeffler and Perdue have not stood with Trump all the way through this fight is on its face untrue. They both have issued statements in support of the president’s recount push and backed him at every turn—and again, the Trump administration knows this, which is why Pence held two rallies last week with the two senators.

When asked about these billboards from Democrats seeking to divide Republicans, the Georgia Republican Party dismissed them as “deceitful campaign tactics” designed to “manipulate voters.”

“Democrats are desperate to elect Radical Raphael Warnock and Jon Ossoff so they can implement Schumer and Pelosi’s radical socialist agenda, and unfortunately for Georgians, that includes deceitful campaign tactics to manipulate voters,” Georgia GOP spokeswoman Abigail Sigler told Breitbart News. “But their attempts to divide Republicans are pointless. Georgians know that Kelly Loeffler and David Perdue continue to stand with our President.”

Really American PAC had tweeted the images of the planned billboards and a plea that linked to a fundraising page on ActBlue, the formal Democrat Party fundraising platform. When Breitbart News asked the organization for comment, the group declined—and then the original tweet disappeared. 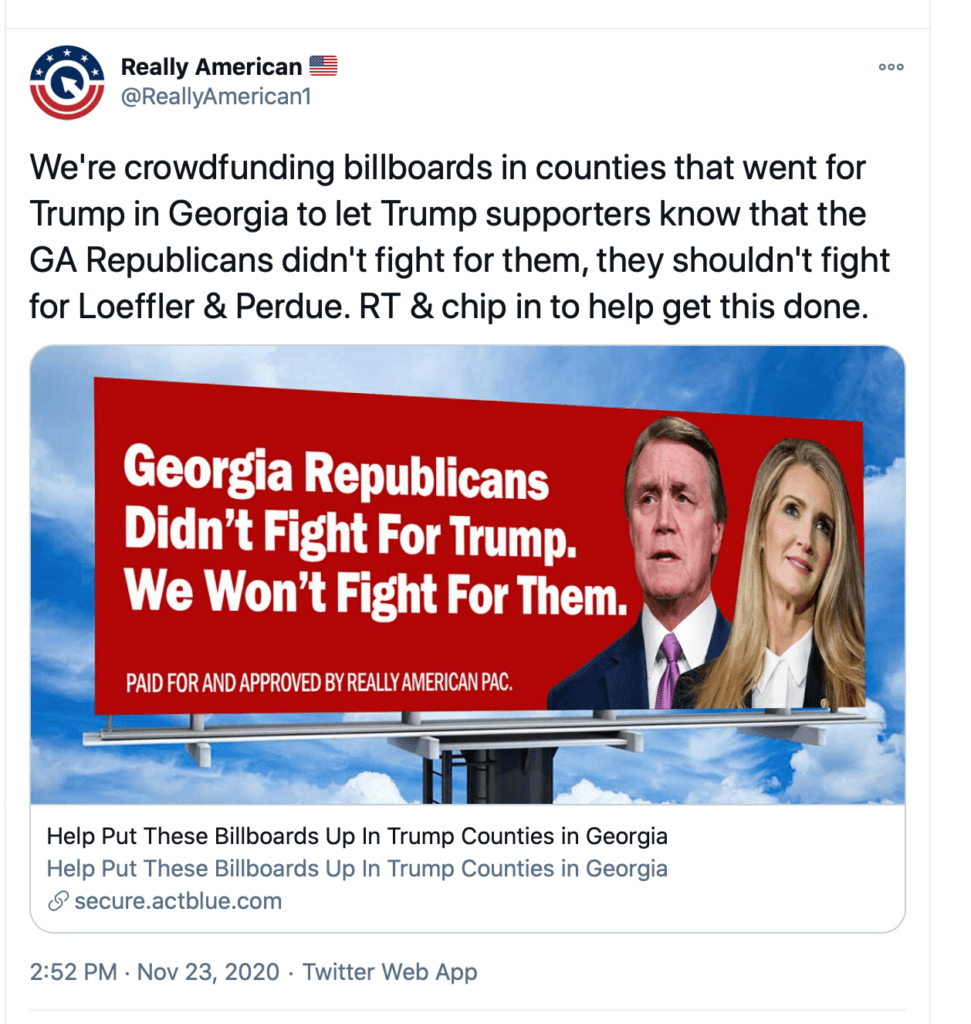 “We’re crowdfunding billboards in counties that went for Trump in Georgia to let Trump supporters know that the GA Republicans didn’t fight for them, they shouldn’t fight for Loeffler & Perdue,” the tweet read. It encouraged followers to retweet it, and “chip in” to “help get this done.”

As of publication of this article, though, the fundraising plea on ActBlue’s website is still active.

The ActBlue fundraising plea for the Really American PAC billboards goes even further than the tweet does in attempting to create and foment intra-GOP divisions to help the Democrats take the Senate.

The battle in Georgia could determine a lot about the future of the country. If Biden does end up overcoming the election challenges from Trump and remains in the lead, then the GOP having a majority in the Senate would be a check on a Biden administration. If the Democrats did take control of the Senate, they would, even though they would have a very slim majority, control the floor and committees in such a scenario that the people of Georgia could stop if they reelect Sens. Perdue and Loeffler.

It remains to be seen what will happen, but Democrats are already aggressively pursuing these seats, as evidenced by this billboard campaign and by efforts that failed former gubernatorial candidate Stacey Abrams is leading to stuff as many absentee ballots into the public sphere as she can ahead of the election. Abrams bragged earlier on Monday about how, according to her claims, more than three quarters of a million such ballot requests had gone out already after the state began sending them out a few days ago.