Attorney John Wood, who Rep. Liz Cheney (R-WY) tapped as a senior investigative counsel for the House Select Committee to Investigate the January 6 Attack, is launching a Senate bid in Missouri as an independent candidate, according to local media.

“I am not looking to be a spoiler. I’m in this race to win it,” Wood told the St Louis Post-Dispatch in an interview Tuesday. “I think that there is a coalition of common-sense voters that can be put together.”

John Wood, a former federal prosecutor who was recently senior investigative counsel to @January6thCmte after @RepLizCheney recruited him, is launching an independent bid in Missouri for the U.S. Senate.

Wood predicted that Greitens would secure the Republican nomination for a general election bid to win outgoing Sen. Roy Blunt’s (R-MO) seat in the Show-Me State. The former governor is among a crowded primary field, including Missouri Attorney General Steve Schmitt (R) and Rep. Vicky Hartzler (R-MO), both of whom have consistently trailed Greitens in the polls. 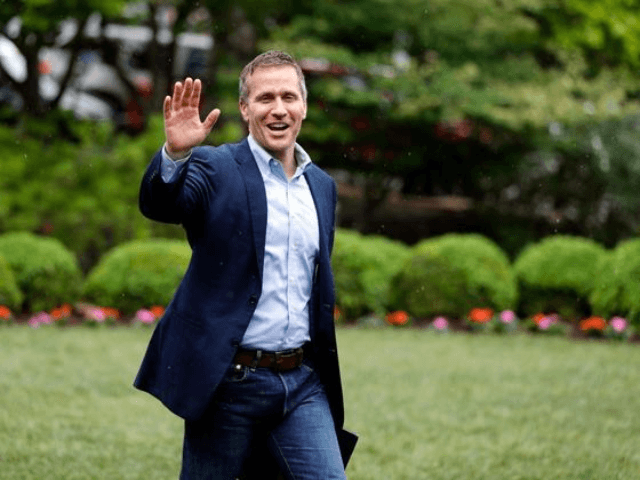 In this Thursday, May 17, 2018 file photo, Missouri Gov. Eric Greitens waves to supporters as he walks to the podium to announce the release of funds for the state’s biodiesel program in Jefferson City, Mo. (Jeff Roberson, File/AP)

Wood wasted no time going after the GOP candidate, telling KUCR that his tongue-in-cheek RINO hunting ad “seemed to glorify hunting down and shooting political enemies.” Reports that Wood was exploring a possible Senate run in Missouri began to circulate last week. Over the weekend, Breitbart News Saturday host Matt Boyle interviewed Greitens and asked him about the rumors.

Since September, Greitens has repeatedly vowed not to support Mitch McConnell as the Senate majority leader should the former governor prove victorious in the general election and the GOP secure a majority.

In September, Greitens told the Washington Post  that Trump “proved to the Republican Party that the only way to meaningfully advance conservative policy is through strong, uncompromising leadership.”

“That’s why as a Republican running for Missouri’s open U.S. Senate seat, I am committed to finding new leadership in the Senate when Republicans win back the majority in 2022,” he added.

Conversely, Wood announced his allegiance to McConnell while speaking with the Post-Dispatch on Tuesday.

“I would (like McConnell’s support). And, if I’m elected, I will support Mitch McConnell for Senate majority leader, and Eric Greitens will not,” he explained.

Wood also issued comments on Cassidy Hutchinson’s testimony at the January 6 Select Committee hearing on Tuesday, telling KCUR it “was extremely compelling.” However, reports have come to light indicating “the lead Secret Service agent in charge of former President Trump’s security detail that day would contradict” her testimony, as Breitbart News noted:

On Tuesday, former White House aide Cassidy Hutchinson testified that former President Trump literally tried to commandeer the presidential suburban during the January 6 riot and became borderline violent when Bobby Engel tried to stop him. Hutchinson said she learned of the story from Tony Ornato, the then-White House deputy chief of staff. Hours later, Peter Alexander of NBC News said that a source close to the Secret Service indicated that agent Bobby Engel will testify “under oath that neither man was assaulted and that Mr. Trump never lunged for the steering wheel.”

The Republican primary in Missouri is set for August 2.