Foremost among these was former New Jersey Gov. Chris Christie, who likened Trump supporters to the John Birch Society and blamed Republican losses for high inflation and crime as he urged the party to dump Trump.

Counting off the losses of Trump-backed candidates in several key midterm races, while omitting victories such as that of Sen.-elect J.D. Vance (R-OH), Christie said the GOP had to free itself from one-man rule to win again.

Former Secretary of State Mike Pompeo was more subtle, telling the gathering that the country needed an eight-year term to fix the mess created by President Joe Biden. (Trump could only serve another four years.)

The convention was the first major political gathering after last Tuesday’s disappointing election, though Rep. Kevin McCarthy (R-CA), the likely incoming Speaker of the House, told the crowd that good days were ahead.

McCarthy also promised to remove Rep. Ilhan Omar (D-MN), who has a history of anti-Israel and antisemitic statements, from the House Foreign Affairs Committee, following a precedent of exclusion that Democrats set with Rep. Marjorie Taylor Greene (D-GA) and the rejection of Republican nominees to the January 6 inquiry.

The bulk of attention, and debate, however, was about Trump, who launched his new campaign on Tuesady.

Conversations with members of the audience suggested that some supported Trump, while others were glad to hear Christie open up a conversation about the need for alternatives, even if his approach had been strident.

When Trump spoke via live stream, he received a standing ovation from roughly three-quarters of the room. 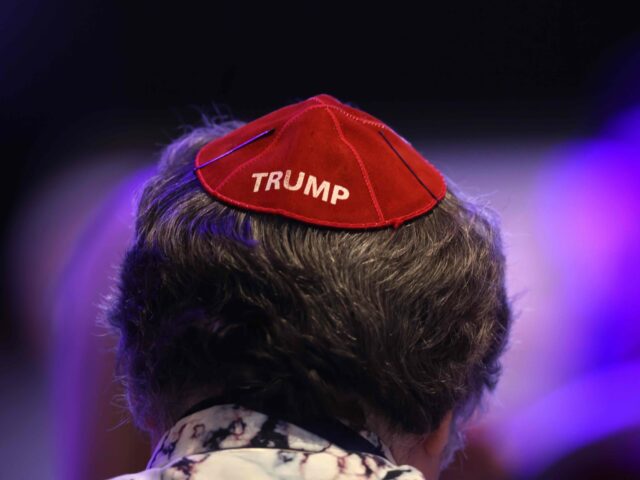 He recounted his achievements in office, particularly his historic successes in the U.S.-Israel relationship. He also teased moderator Norm Coleman, a former Senator, noting Coleman was cheated out of reelection in 2008.

Other speakers who were warmly received were Sen. Tim Scott (R-SC), who spoke about the need to “rise up” against antisemitism, and incoming Prime Minister Benjamin Netanyahu, who spoke via video from Israel.

Former Vice President Mike Pence spoke, but did not take on Trump directly.

Joel B. Pollak is Senior Editor-at-Large at Breitbart News and the host of Breitbart News Sunday on Sirius XM Patriot on Sunday evenings from 7 p.m. to 10 p.m. ET (4 p.m. to 7 p.m. PT). He is the author of the recent e-book, Neither Free nor Fair: The 2020 U.S. Presidential Election. His recent book, RED NOVEMBER, tells the story of the 2020 Democratic presidential primary from a conservative perspective. He is a winner of the 2018 Robert Novak Journalism Alumni Fellowship. Follow him on Twitter at @joelpollak.