Former Vice President Mike Pence lays out in his new book his history in politics, including something many voters probably did not know about him: He grew up a Democrat.

Like former President Donald Trump, another former Democrat, Pence reveals in the book that before joining the Reagan Revolution — a populist working-class shift to the GOP for many Democrats in the late 1970s and early 1980s, led by another former Democrat-turned-ardent-conservative-Republican Ronald Reagan — he was a Democrat too.

“I joined the Reagan Revolution after starting out in politics as a Democrat,” Pence told Breitbart News in an exclusive interview on Friday afternoon last week about the book. “In my book, So Help Me God, I talk about my own journey, which really came from being raised in the family of a grandson of an Irish immigrant and the son of a combat veteran and a precocious first-generation Irish American. My early days in politics, I started as a Democrat. But when I heard the voice of Ronald Reagan, when I made a personal decision to put my faith in Christ, and I came under the influence of a strong conservative professor at my college, my outlook and my politics began to change. I joined the Reagan Revolution and never looked back. I ran for Congress, as I write in So Help Me God, the first time when Ronald Reagan was still in the White House. I would not be elected for another 12 years when I arrived at Capitol Hill in the year 2000.”

The phenomenon is actually pretty common among top conservatives. Not all of them, but many — like Trump, Reagan, Pence, Supreme Court Justice Clarence Thomas, the founder of Breitbart News Network Andrew Breitbart, and so many more — of the nation’s top conservatives are former lefties. The shift has continued and reappeared over the decades after beginning with the “Reagan Democrats,” who later became the Tea Party Movement and then eventually the Trumpocrats.

Pence was a conservative Republican who made the shift long before Trump picked him as his running mate in 2016. Pence had run for Congress for the first time in the 1980s when Reagan was still the president. He recounts in So Help Me God, his new book he is currently promoting, a scene in which as a candidate he met Reagan at the White House — but he did not win that year. It was not until the year 2000 that Pence would first win a seat in Congress, where he served for over a decade until he ran for governor of Indiana in 2012, and four years after that, Trump would select him in 2016 to be his running mate. Trump and Pence would go on to win the White House and defeat Democrat Hillary Rodham Clinton and her running mate Sen. Tim Kaine (D-VA), and Pence would serve for four years as the 48th vice president of the United States.

Pence told Breitbart News he was shocked when he got to Washington to see then-President George W. Bush — a Republican — promoting big government, something he fought as hard as he could inside his own party. Those fights against No Child Left Behind and against Medicare prescription drug expansions prepared him to later lead the Republican Study Committee (RSC) — the largest bloc of conservatives in Congress — and then the House GOP conference. From that platform, he was elected as the 50th governor of Indiana — and then by Trump as his running mate. 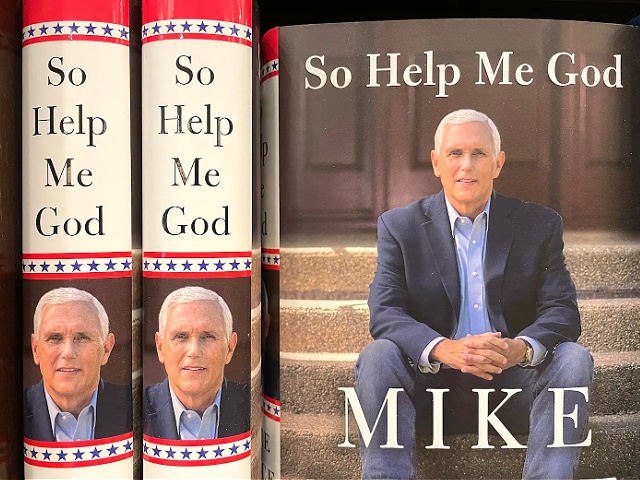 Copies of the new book So Help Me God by former U.S. Vice President Mike Pence are displayed on a shelf at a Barnes & Noble bookstore on November 15, 2022, in Corte Madera, California. (Photo by Justin Sullivan/Getty Images)

“Sometimes I feel like I ran before the Republican revolution on Capitol Hill, and I was elected after it was over because when I got to Capitol Hill, it was six years after Newt Gingrich had led Republicans to victory on the Contract with America and the first bill George W. Bush sent to Capitol Hill was No Child Left Behind, which was the biggest expansion of the federal Department of Education since the days of Jimmy Carter,” Pence said. “I found myself with other conservatives fighting a rearguard action against Medicare prescription drug entitlement. In fact, I would go on to lead House conservatives at the Republican Study Committee after having been involved in those battles. And then ultimately our efforts opposing the Wall Street bailout all was at a time when I felt our party was walking away from the principles of limited government that had minted the Reagan Revolution itself: a commitment to a strong national defense, limited government, and traditional values.”

He continued, “Republicans entered into a season of big government Republicanism, and as I recounted in my book, we paid the price: We lost the House and we lost our way. But in the midst of all of that, I saw a movement rising up of millions of Americans that were inspired by those ideals never change. They held Republicans accountable in 2006, but when I became conference chairman, we refocused on that agenda and we won back the Congress. The movement came to be known as the Tea Party Movement, and I believe it was that very movement that was reignited when Republicans fought and defeated Nancy Pelosi the last time, and it created the foundation for the movement that elected Donald Trump to be the 45th president of the United States.”

After he and Trump won in 2016, Pence said, he was proud to enact a conservative agenda alongside Trump.

“Then, in our administration, I couldn’t be more proud of the fact that we put all those principles into practice,” Pence said. “We rebuilt our military. We launched the first new branch of our armed forces in more than 70 years. We secured our border, reduced illegal immigration by 90 percent. We cut taxes and regulations and unleashed energy and created a booming economy that saw seven million jobs and the lowest unemployment in 50 years. And we appointed 300 conservatives to our courts, including three Supreme Court Justices who after we left office gave America a new beginning for the right to life. For me, it’s all — I hope people sense in my book as our party has ebbed and flowed around the conservative movement, that’s the movement I’ve been a part of every day of my life since my very first campaign and a movement I fought to advance when I was in the Congress and as governor and we did advance in the Trump-Pence administration. Whatever the future holds for me and my family, I’m never going to stop fighting for the conservative agenda.” 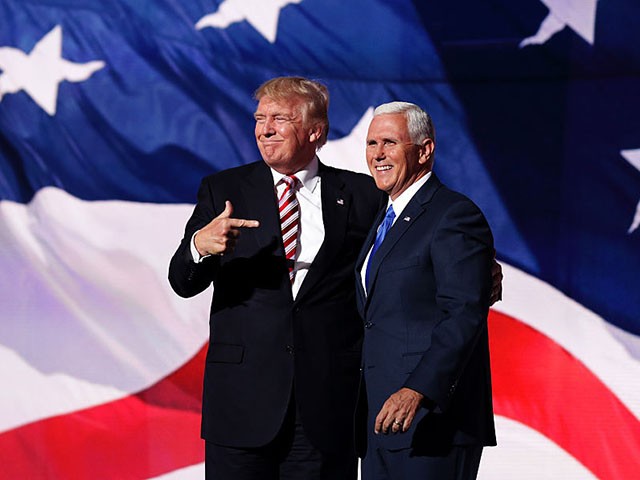 Pence’s book offers a sobering recounting of all these legislative and movement battles dating back to his early days in politics all the way through the present — including his most-detailed accounting of what happened during the Capitol riot on Jan. 6, 2021. The prologue in which Pence vividly recounts what he went through that day is the most detailed he has been yet about it. Asked about that, and how he got the title for his book — So Help Me God are the last four words of the oath of office he and every other federal government official takes — Pence explained that he upheld his oath that day.

“January 6 was a tragic day. I will always believe in my heart of hearts that I did my duty that day under the Constitution and laws of this country,” Pence said. “But what I wanted people across the country to know was that on that day, I kept my oath to the Constitution of the United States — nothing more, nothing less. The Bible says he keeps his oath even when it hurts. I have some familiarity with that. I was as disappointed as anyone with the outcome of the election. As I wrote to Congress on that day, January 6, I was as concerned with voting irregularities as were millions of Americans, and I was hopeful we could have a fulsome debate about irregularities and any evidence of fraud that would never come before the Congress of the United States. But, the riot that ensued left me with a simmering indignation, and I was determined that day to stay at my post and keep my oath and finish my work. But I wanted people to know I viewed my oath of office as a promise I made to the American people and to almighty God. The oath of office ends with a prayer, So Help Me God. I wanted people to know that that was the foundation of all that I did, and I think it has to be the foundation of all of our party and our movement and our country going forward. George Washington said that ‘The Constitution is the guide which I never will abandon.’ I think as we move forward in these challenging times, we would do well as a movement, as a party, and as a people to look to the wisdom of our founders enshrined in the Constitution of the United States and keep faith with the American people and faith with our highest ideals. I believe we will not only win back the right to lead America but we will lead our country to a boundless future.”

When asked about how conservatives can apply all these lessons to the future to win elections again, Pence pointed to governors across the country — he specifically named Govs. Brian Kemp of Georgia, Ron DeSantis of Florida, and Greg Abbott of Texas who all won reelection this year, and Gov. Doug Ducey of Arizona who was term-limited out — as the example of what the GOP needs to do moving forward.

“All credit goes to all the great Republican governors — Gov. Ducey, Gov. DeSantis, Gov. Abbott, Gov. Kemp — three of whom were standing for reelection and were reelected decisively,” Pence said. “Therein lies the answer. The Bible says without a vision, the people perish. I think that while it will be absolutely essential that the new Republican majority provide the necessary oversight to hold the Biden administration accountable and do the people’s work in providing that balance of power contemplated in the Constitution of the United States, I also think it will be equally important that House Republicans produce legislation. Even if they just pile it on Chuck Schumer’s desk, that shows a pathway toward restoring our military, securing our border, reviving our economy, and protecting our liberties. I think that while I expect the fate of legislation passing the Republican House to be grim in the Democrat-controlled Senate, I think Republicans in the new majority owe it to the American people to legislate in a way that essentially shows a straight path back to the prosperity and security of the Trump-Pence years, and I think that’s the key. Congress playing its role in the public debate and accountability and oversight is important, but of equal importance is laying out a vision and producing policies that now, having won back the House, will set the stage for us to win back the Senate and win back the White House in 2024.”