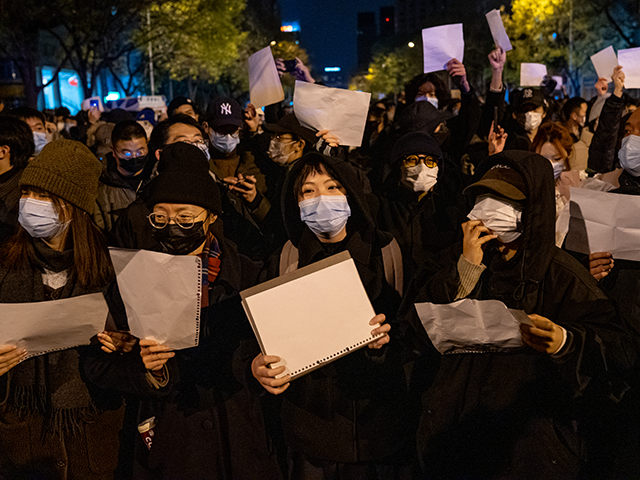 Searches for major Chinese cities that have experienced mass protests will “mostly see ads for escorts/porn/gambling, drowning out legitimate search results.” according to the account “Air-Moving Device” that was one of the earlier sources that located the trend.

Air-Moving Device continued: “Data analysis in this thread suggests that there has been a significant uptick in these spam tweets.” The account shared data retweeted by Stanford Internet Observatory director Alex Stamos.

Still working on our own analysis, but here is some good initial data that points to this being an intentional attack to throw up informational chaff and reduce external visibility into protests in China (Twitter being blocked for most PRC citizens):https://t.co/kPK7nMeCPu

The analysis noted that the “vast majority” of accounts appear to be spam accounts that “tweet at a high, steady rate throughout the day, suggesting automation.” Mengyu Dong of Stanford University shared images of some of the “escort ads,” adding that they “make it more difficult for Chinese users to access information about the mass protests.”

She added: “Some of these acts have been dormant for years, only to become active … after protests broke out in China.”

Chinese bots are flooding Twitter with *escort ads*, possibly to make it more difficult for Chinese users to access information about the mass protests. Some of these acts have been dormant for years, only to become active yesterday after protests broke out in China. for example: pic.twitter.com/QRYLQu09Pq

“Sadly if a Chinese person decides to come to Twitter to find out what happened in China last night, these nsfw [not suitable for work] posts shared by bots are likely the first to show up in their search results,” Dong wrote.

This is reportedly not the first time that suspected government-linked accounts have used this technique, according to a former Twitter employee who spoke to the Washington Post anonymously.

“This is a known problem that our team was dealing with manually, aside from automations we put in place,” said the former employee. This new campaign was “another exhibit where there are now even larger holes to fill [at Twitter],” the ex-employee said. “All the China influence operations and analysts at Twitter all resigned.”

Lucas Nolan is a reporter for Breitbart News covering issues of free speech and online censorship. Follow him on Twitter @LucasNolan