In a Tuesday appearance on The Dan Patrick Show, Clark insisted that race is playing a part in how the media is looking at Kupp’s standout year.

“If Cooper Kupp were black, we’d all talk about him in a different way,” Clark said. “A lot of times we look at the (skin) color of a wide receiver and we want to compare them to people who they look like, more so than people who they play like.”

Kupp is clearly one of the best wide receivers in the NFL this year. He led the league with 145 catches, 1,947 yards, and earned 16 touchdowns. 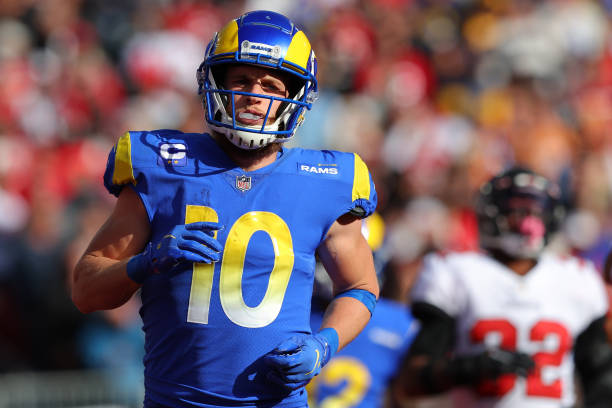 TAMPA, FLORIDA – JANUARY 23: Cooper Kupp #10 of the Los Angeles Rams reacts after scoring a touchdown in the second quarter of the game against the Tampa Bay Buccaneers in the NFC Divisional Playoff game at Raymond James Stadium on January 23, 2022 in Tampa, Florida. (Photo by Kevin C. Cox/Getty Images)

But Clark thinks that Kupp would be talked about more if reporters simply talked about him as a star player and not just make analogies to other white players.

“To me, Cooper Kupp is a Davante Adams, Justin Jefferson…he’s in the conversations with those type of guys for feel of the game, route running, and catching ability,” Clark said.

“As route running goes, I think he’s one of the greatest that’s ever lived,” Clark insisted. “Cooper creates so much separation with his route running, that I just think it’s so underrated the type of athlete and player that he is.”

As far as Clark is concerned, if Kupp were black, the sports media would be falling all over itself to play him up.