The New York Times is covering up the Ivy League sex and swimming scandal by endorsing the transgender claim that a male swimmer — Lia Thomas — really is a woman.

Thomas has already won multiple races and records after declaring that he has a female “gender identity.” This widely rejected claim — plus some female hormones — was enough for the Ivy League to let him compete for prizes against women instead of men.

So the NYT’s June 24 article blocked readers’ comments as it praised Thomas in a writing style commonly used in magazines aimed at women:

[Samantha] Shelton chugged ahead from the start, plowing through the water and carrying the lead. But as she did, Thomas cruised along beside her, seeming as unhurried as if on a training swim. Thomas’s broad shoulders and long arms, hallmark features of an elite swimmer, mimicked a windmill with the ease in which they pulled her along.

Then came the final turn.

As Shelton came out of it continuing to fight, on her way to a season-best time, Thomas, with her long, rhythmic, powerful stroke, ate up the margin between them until she had surged past for a near body-length victory.

And so if there was something enduring about Saturday, it was not the two races that Thomas comfortably won or the two relays where she gamely tried. It was the way she carried herself in the water — head down, with grace and ease.

The NYT accepts and broadcasts the transgender claim that people can change their sex with a flip of their gender identity. For example, it posted an uncritical article about another man — Amy Schneider — who recently seized records for women on the Jeopardy! quiz show.

But the newspaper’s readers oppose the claim — so the NYT blocked comments from its upper-income, Democrat-voting, liberal and progressive readers.

But the response via social media was a complete rejection of the article:

This article is really disturbing that you articulate such little care for women who have spent their lives competing. It’s ridiculous that you barely mention how Lia has smashed records touted by female Olympic swimmers. People like you are the worst kind of human.

“I had no doubt that it was written by a man,” responded @Catherine Weibel. “Your lack of interest for whether/how this might impact women’s right to a level playing field is striking. So is your failing to interview a single woman on Ms. Thomas’ team.”
“Get a room,” said a tweet from @NeoPagliacci.

An astonishingly dishonest and manipulative piece. This is an activist op-ed, not journalism.
Comments are turned off of course, as @nytimes are terrified of readers’ ability to see through this.
Here’s an excellent example of how the data is manipulatively stripped of context: https://t.co/AXFydMFYkg

The female swimmer struggled, giving her all. After her long limbed competitor coasted before deciding when to put her out of her misery, she turned & smiled. Though defeated, her beatific smile showed her truest, most womanly beauty – acceptance of her lot.

Liberal @Anne_on_gd piled on: “When will @nytimes and mister @billywitz start seeing WOMEN as human beings with equal worth, instead of props? You’d never tell young men to forget their ambitions & celebrate their competitors’ humanity instead!”

“PS I don’t know which is worse the rank SEXism or the bad prose,” she added.

I am not a right winger. I am probably more left than you are..The issue is basic fareness in swim competition. Everything else is background political noise ( including the "human" aspect).

Lia Thomas is a MAN! No one looks at Lia Thomas and sees a woman, including you. Many top athletes pointed to the unfairness.
You know it's highly unfair and yet you don't give a sh!t because why would you? It's only women's sport on the line here.#SaveWomensSports

It includes non-political people trying to live as idealized stereotypes of the opposite sex, pre-pubescent children with childish views of sexuality, and ideologues who wish to blur distinctions between the two sexes. 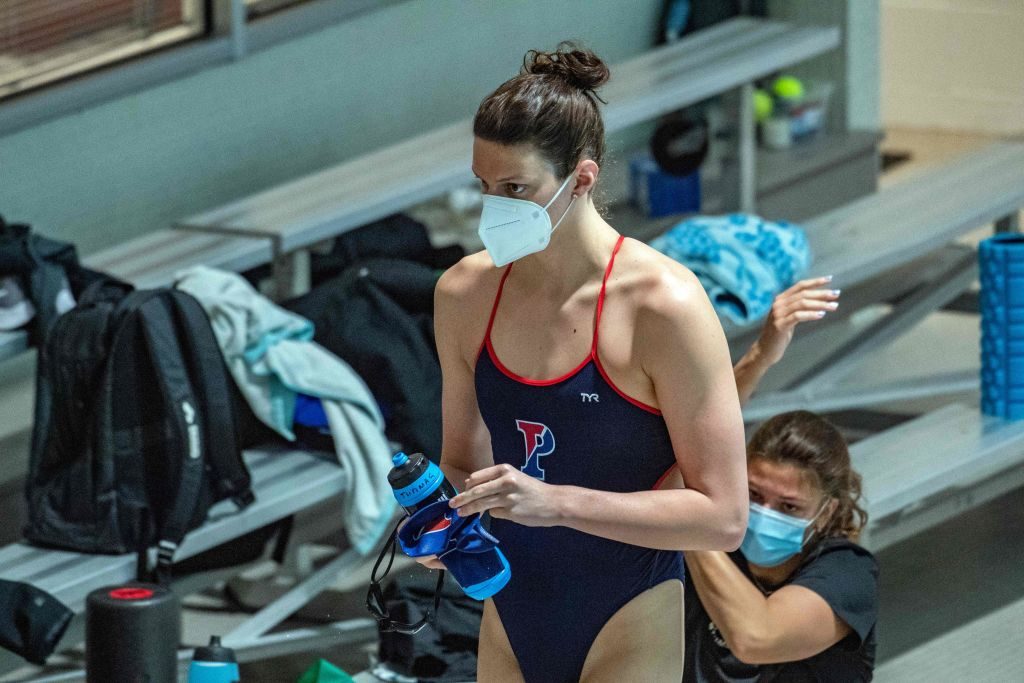 Lia Thomas walks to the pool to swim for the for the University of Pennsylvania at a meet against Harvard University in Cambridge, Massachusetts, on January 22, 2022. (OSEPH PREZIOSO/AFP via Getty)

It also includes sexual liberationists and progressives who are eager to liberate people from their bodies, parents who are eager or willing to endorse transgender claims, and journalists eager to help their social peers.

This movement is overwhelmingly opposed by the public, by doctors shocked at the psychological and healthcare damage, by a growing number of young people who have “de-transitioned” back to their sex, by parents trying to shield their children from transgender activists, and by transsexual, liberal and conservative critics of the transgender ideology.