Some 25,000 people spent their Friday and Saturday in Hebron this past weekend to celebrate “Shabbat Hebron,” the weekend in which observant Jews read the Biblical portion which tells of Abraham’s purchase of the Cave of the Patriarchs and Matriarchs in Hebron.

The City of Hebron released the following description of the event:

This year’s festivities featured special mass free Sabbath meals. Thanks to a generous anonymous donor, Chabad of Hebron sponsored three free first-class meals which took place under a giant tent fit 3,000 guests, making the event the largest Sabbath gathering in the world. Moreover, the meals were lavish in style: wedding plates, tablecloths, and waiters – with food to match.

Many of these attended a Friday night panel discussion about the potential future of Israeli sovereignty in the heartland provinces of Judea and Samaria, the Hebrew names for the West Bank region.

In the big hospitality tent, young Israelis eat and sang under an oversized banner which read, “Make Hebron Great Again.”

“Jihadists are busy starting fires and proudly proclaim that #IsraelIsBurning on social media. At the same time UNESCO tries to delegitimize the Jewish narrative by rewriting history. But we, the people of Israel, will fight fire with fire. By fearlessly coming en masse to Hebron and proclaiming with fiery passion and defiance that we will not relinquish our heritage, our history, and out rights, we will beat them back. If the flames of the Holocaust did not stop us, then no amount of destructive fire or global brainwashing will stop us either. Hebron, and all of Israel, is ours from antiquity to eternity.”

Here are pics of the “Shabbat Hebron” event: 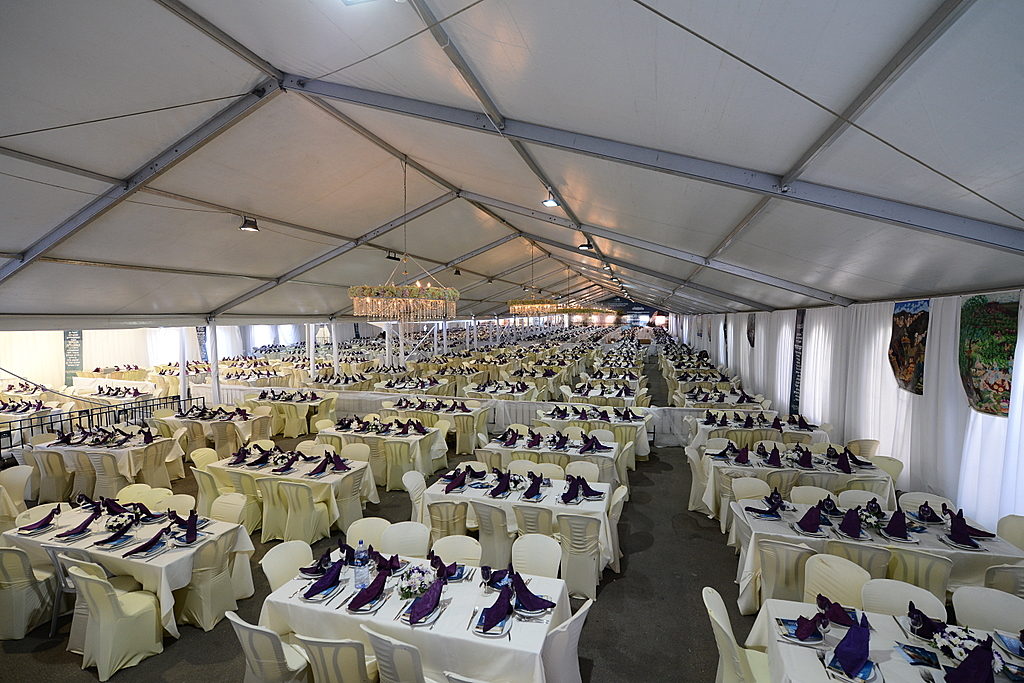 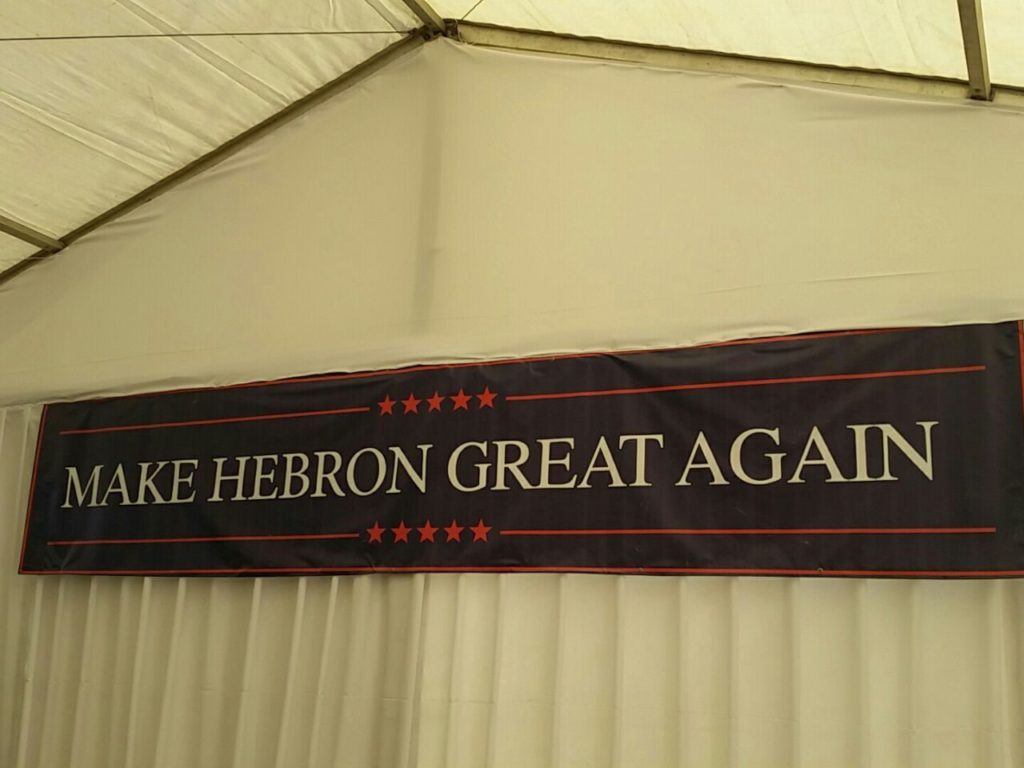 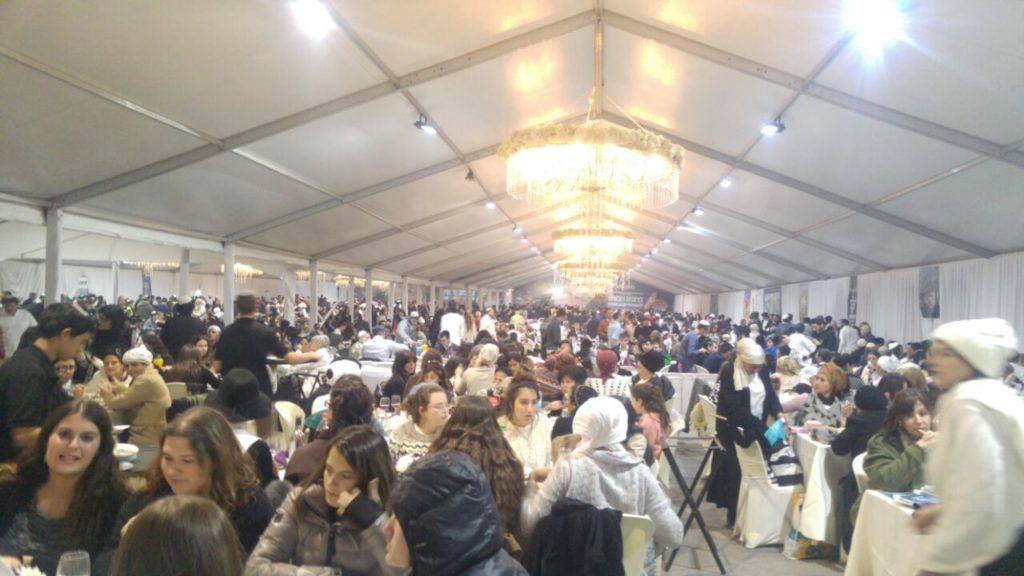 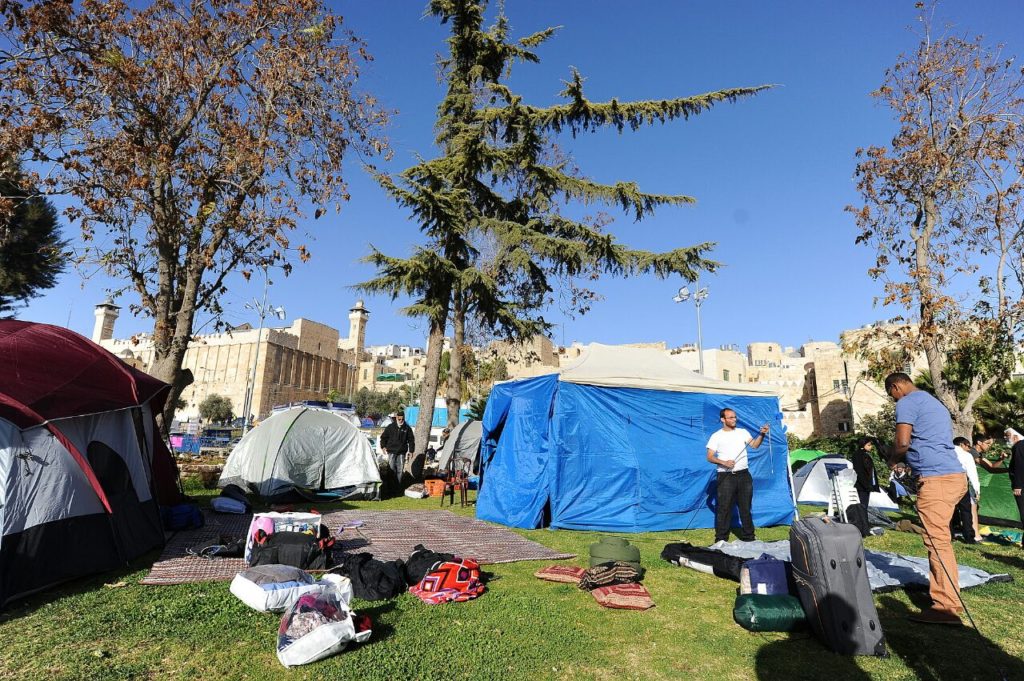 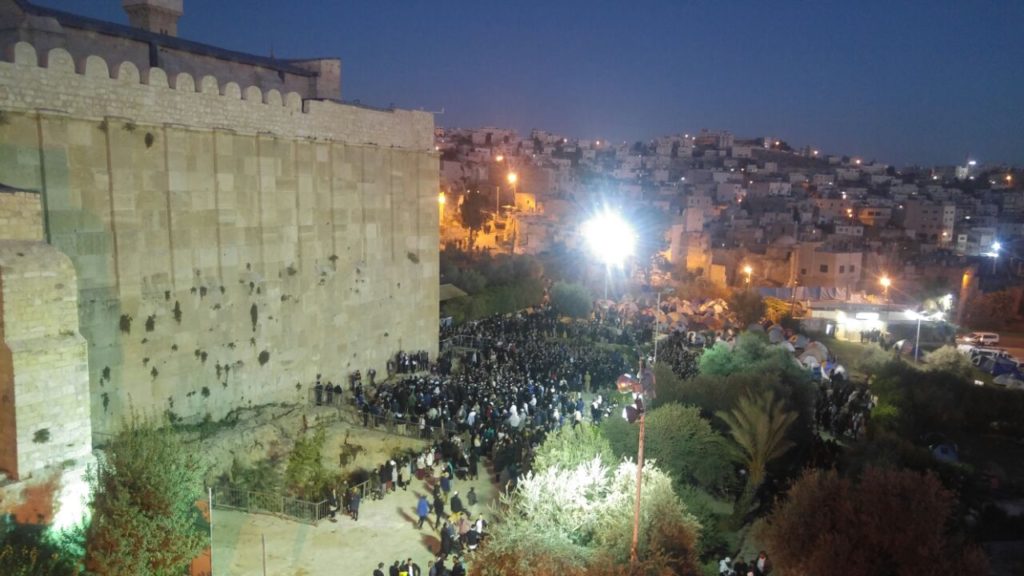 The Tomb of the Patriarchs is believed to be home to the resting place of the biblical patriarchs and matriarchs Abraham, Isaac, Jacob, Sarah, Rebecca and Leah. The site is considered the second holiest in Judaism.

The Palestinians claim the West Bank – which includes Hebron – and eastern sections of Jerusalem for a future state. But the Palestinian Authority has rejected multiple Israeli offers of a state and have refused in recent years to come to the bargaining table.

This reporter previously documented some of the Jewish history of Hebron:

Hebron is the oldest Jewish community in the world, with Jews having lived there almost continuously for over 2,500 years. There are accounts of the trials of the city’s Jewish community throughout the Byzantine, Arab, Mameluke and Ottoman periods.

In 1929, as a result of an Arab pogrom in which 67 Jews were murdered, the entire Jewish community fled the city, with Hebron becoming temporarily devoid of Jews. Jews returned when Israel recaptured the area in 1967.

King David was anointed in Hebron, where he reigned for seven years. A thousand years later, during the first Jewish revolt against the Romans, the city was the scene of extensive fighting in which many Jews were killed.

The Jewish Virtual Library reports on the more recent history of the city:

Following the creation of the State of Israel in 1948, and the invasion by Arab armies, Hebron was captured and occupied by the Jordanian Arab Legion. During the Jordanian occupation, which lasted until 1967, Jews were not permitted to live in the city, nor – despite the Armistice Agreement – to visit or pray at the Jewish holy sites in the city. Additionally, the Jordanian authorities and local residents undertook a systematic campaign to eliminate any evidence of the Jewish presence in the city. They razed the Jewish Quarter, desecrated the Jewish cemetery, and built an animal pen on the ruins of the Avraham Avinu synagogue.

Jews were allowed to return to Hebron in 1967, after Israel captured the city during the defensive Six Day War.

The Palestinian Authority and much of the international community says Israel is occupying land beyond the so-called pre-1967 borders, meaning the Gaza Strip, West Bank, and eastern Jerusalem, including the Temple Mount. Israel refers to these territories as disputed.

United Nations Security Council Resolution 242, the only binding resolution pertaining to the West Bank, calls on Israel to withdraw under a future final-status solution “from territories occupied” as a result of the 1967 Six Day War. The resolution does not call for a withdrawal from “all territories,” a designation deliberately left out to ensure Israel’s allowance under a future deal to retain some territory for security purposes.

The Security Council did not say Israel must withdraw from “all the” territories occupied after the Six Day War. This was quite deliberate. The Soviet delegate wanted the inclusion of those words and said that their exclusion meant “that part of these territories can remain in Israeli hands.” The Arab states pushed for the word “all” to be included, but this was rejected. They nevertheless asserted that they would read the resolution as if it included the word “all.” The British Ambassador who drafted the approved resolution, Lord Caradon, declared after the vote: “It is only the resolution that will bind us, and we regard its wording as clear.”