“She has inside information. It’s not right. It’s not appropriate. It shouldn’t be,” Trump said when asked by Breitbart News about Pelosi’s stock trading. “She doesn’t want to discuss that. She wants to discuss other things that shouldn’t be discussed. Some of the things that they’re proposing now, like impeaching someone for absolutely no reason for a perfect phone call. You look at that. You look at impeachment—both of them. But you get impeached for a phone call that was like perfecto. So many different things. I happen to watch her and see her and dealt with her a lot and I think she’s clever in one way and stone cold crazy. She should not be allowed to do that with the stocks. She should not be allowed to do that. It’s not fair to the rest of this country.”

Trump held the call with reporters from select outlets including Breitbart News to hype explosive sales of his photo book Our Journey Together, which has now sold over 200,000 copies in just over a month. The book, from Winning Team Publishing, is backed up on printers as paper shortages in America thanks to Democrat President Joe Biden’s supply chain shortages are preventing publishers from printing the books fast enough. Sergio Gor, the president of Winning Team Publishing, opened the Trump call by joking about the Biden supply chain shortages holding up printing of enough copies of Trump’s book to keep up with demand. “Only in Joe Biden’s America do you run out of paper, so our printer has had issues not just with our book but also with several of these giant success books so that kind of ended up delayed all across America,” Gor said. 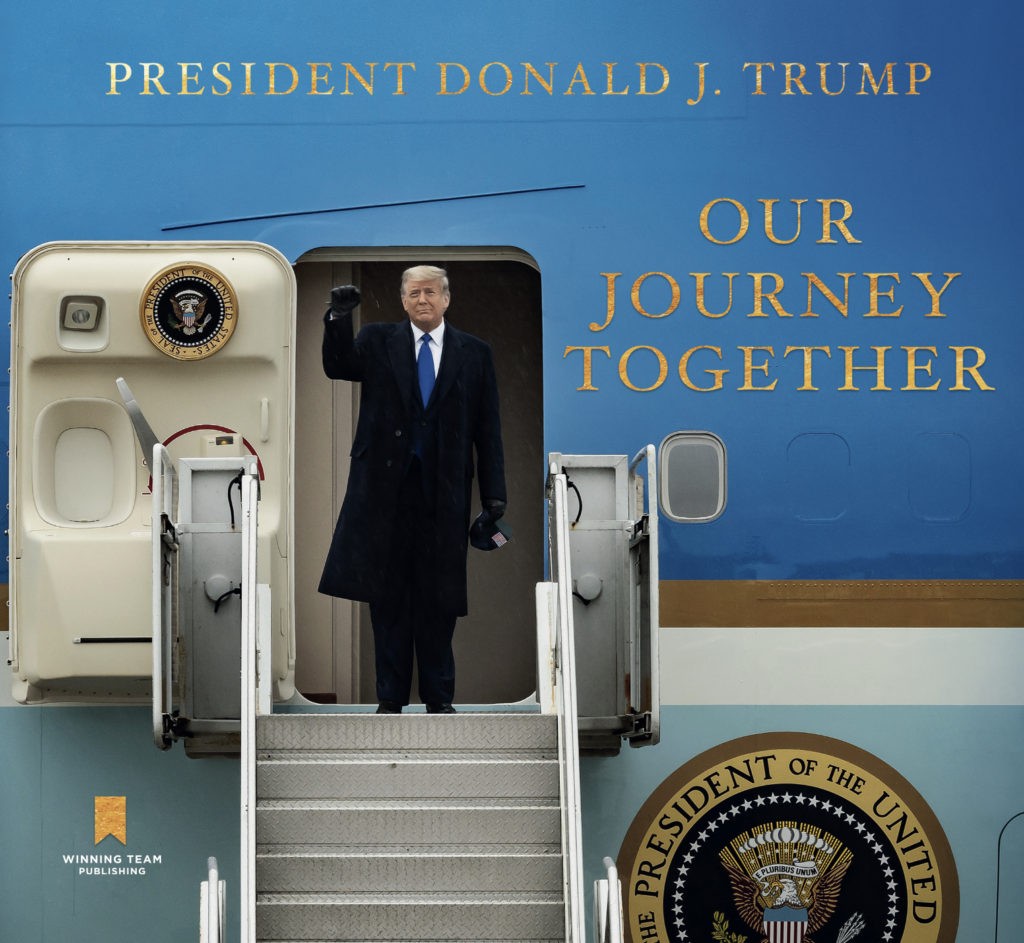 As Breitbart News has reported, Trump bashes Pelosi in the book, writing that she is “f—ing crazy.” Pelosi has been in the news as of late given her prolific stock trading efforts—she consistently outperforms the market—which have drawn bipartisan ire as both Republicans and Democrats seek to ban members of Congress from trading stocks as a result of Pelosi’s apparent abuse of the system.

House GOP leader Kevin McCarthy has proposed banning members of Congress from trading individual stocks, something several other Republicans, like Sen. Josh Hawley (R-MO) who introduced a bill to this effect, also back. Even some Democrats, like Sen. Jon Ossoff (D-GA), have proposed similar measures.

Pelosi, for her part, has announced opposition to such ban proposals, claiming instead that she is a “capitalist” and should be allowed to do whatever she wants on that front. But things could change if Republicans retake the majority and McCarthy implements such a ban from the Speakership.

Trump praised McCarthy later in the call when one reporter asked if he supports the California Republican for the Speakership should the Republicans win back Congress in November. 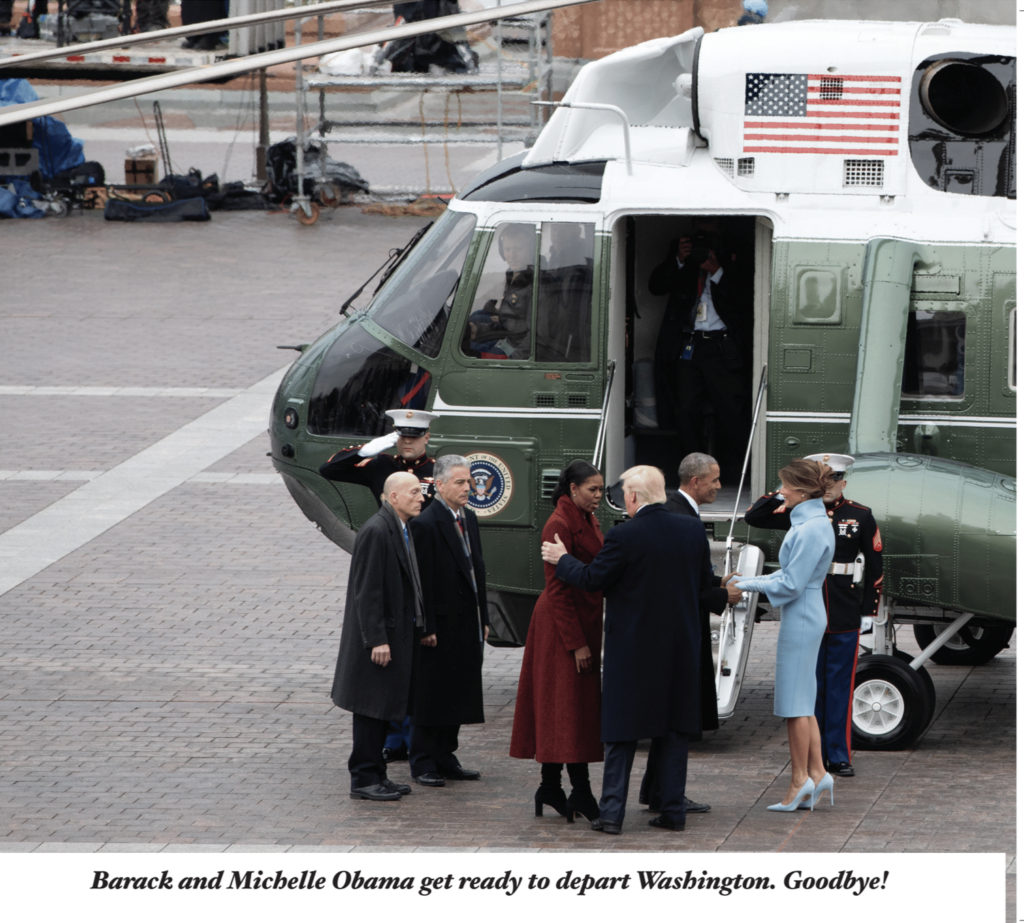 “Kevin and I have worked really well together,” Trump said. “We got people elected. As you see, I’ve endorsed many people. I’m 158-2. One hundred fifty eight wins and two losses. And the two losses, the people that won are friends of mine now and they were more conservative, they were more Trump as I say, than the people I put up. But it’s 158-2, which is an incredible record. Nobody has that record. I very much helped in Virginia. If I didn’t do that, we would have lost by a lot. People understand that. People in Virginia understand that, that I can tell you. People went out in force at my request, and if they didn’t go out it would have been a very big loss. We’ve done very well with that. Kevin and I work very well together. We do the tele-townhalls and we’ll get 20 or 25 thousand people on calls. We’ve had a great success. If you look at last time, we were expected to lose 25 to 30 House seats and I made 58 calls. Some were for senators by the way also, and I think you would have been 60-40 in the Senate if I didn’t get involved—you would have been 60-40 down in the Senate. In the House, instead of losing 35 seats and it could have been more than that, we won 16 and everyone was so surprised and that is because I endorsed people. I said give me the ones who are losing close or evening winning close and I made those calls. It turned out to be 58 calls, including for senators like Joni Ernst and Dan Sullivan and I think North Carolina was another one of them—Thom [Tillis]. It was a lot of calls I made, and it would have been 60-40. For instance, in South Carolina, Lindsey [Graham] is very happy to tell people that I helped him greatly. I won very big in South Carolina and was very glad I helped Lindsey. We could go over the list, and it’s very special, but I worked with Kevin closely on that.”

Trump at the outset of the call mocked Biden’s then-ongoing press conference, telling the reporters on his call that he hopes he is “not disturbing your viewing of this news conference” and that it is “a very friendly conference indeed and the questions are lovely.” 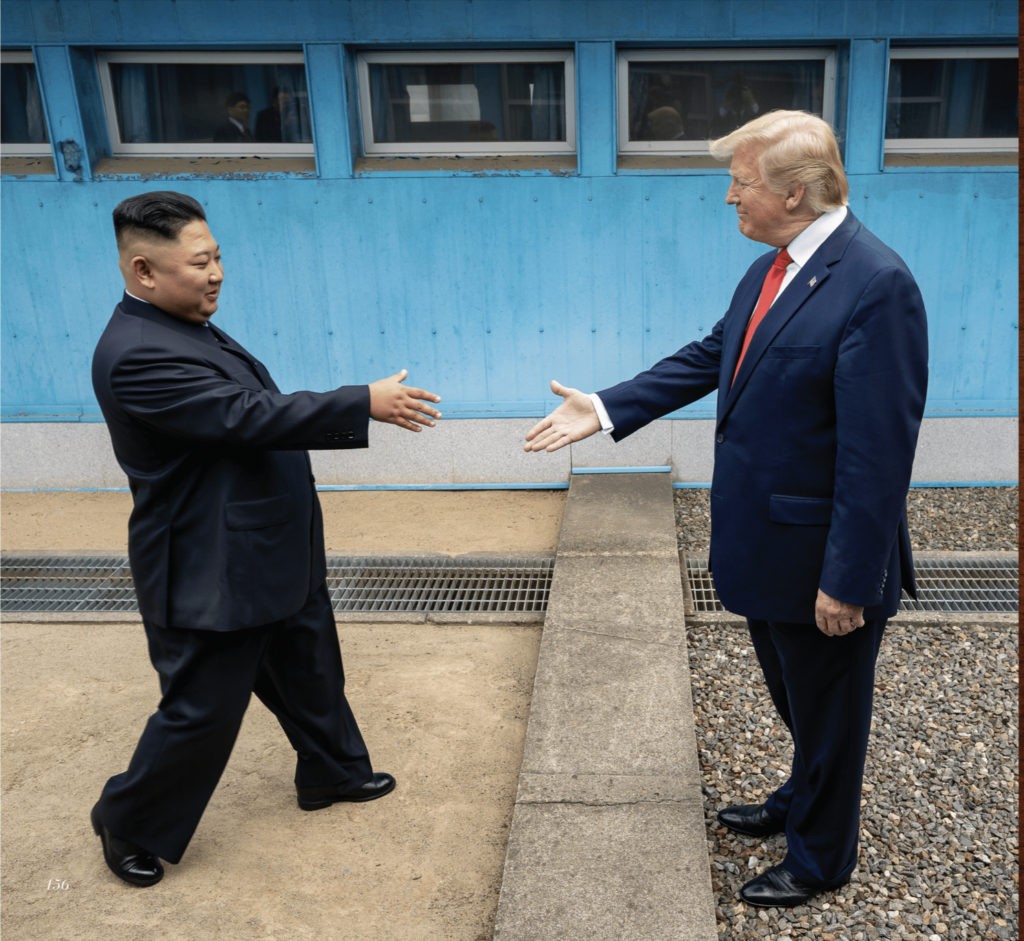 “I wish they asked me questions so nicely like that. They’re almost apologizing for asking the questions,” Trump said, mocking the White House press corps’ handling of Biden with kid gloves. “It’s a hell of a thing to watch because he’ll read a list and he’ll pick somebody from the list then he’ll look down at his notes and he’ll answer the question. I never did that. I don’t think I could have gotten away with it.”

Trump also during the call dispelled recent media rumors of a spat with Florida GOP Gov. Ron DeSantis, saying his relationship with the bombastic chief executive of the Sunshine State is “very good.”

“When he wanted to run, he asked for my support and I supported him and he went up immediately very, very high,” Trump said. “He won the election the day I announced I was going to give him my endorsement. Then I helped him beat their so-called star, the Democrats’ so-called star, who turned out not to be very much of a star. But I have a very good relationship with him and we’ve had that for a long time and I was very supportive of him and I continue to be. I think he’s good.”

Trump’s publisher is getting another 100,000 copies next month when supply chain problems ease up, and then another 100,000 copies after that. The photo book is available to order at 45Books.com and Trump thinks the reason it has sold so many copies so quickly is because people are seeing just how bad Biden has been in his first year and wanting to remember what it was like to have an effective president in office. 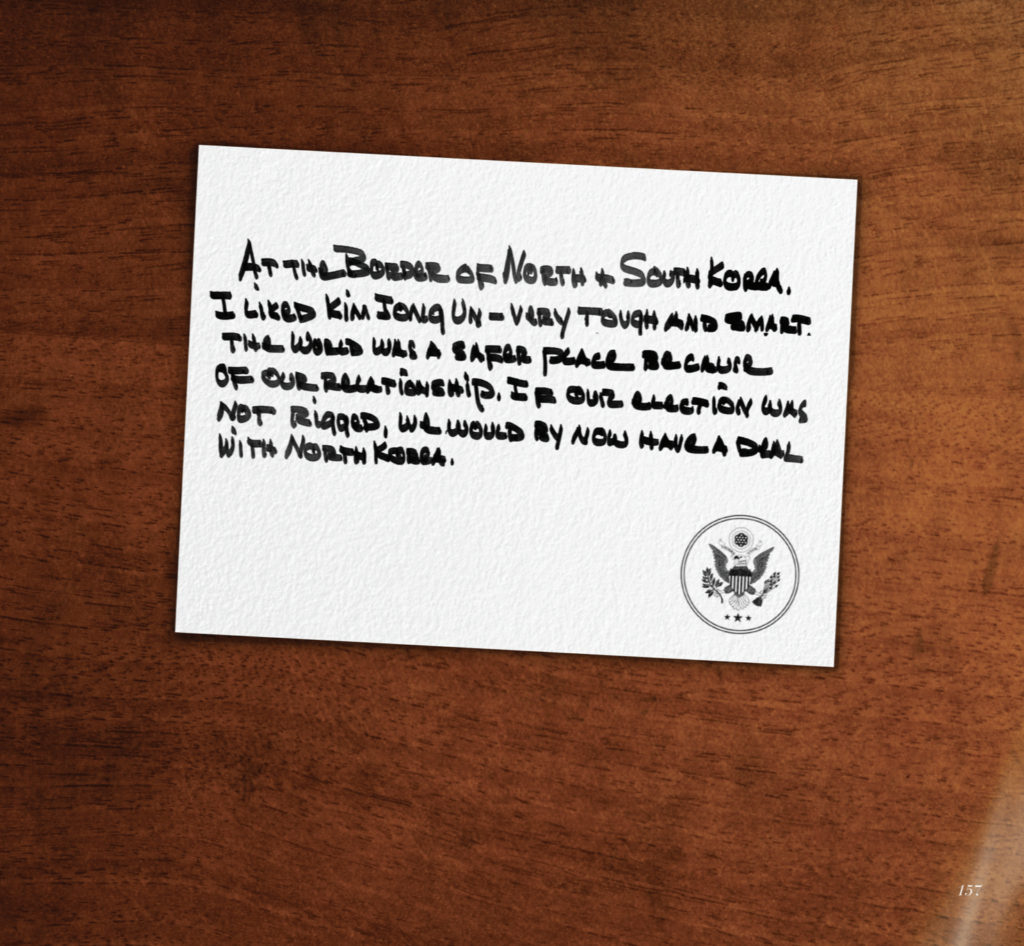 “I really think it’s because people—they see what’s happening now and want to go back to the past,” Trump said on the call. “Despite the witch hunts, despite the impeachment hoaxes, despite the Mueller hoax, despite the no collusion hoax of 18 angry Democrats for two and a half years—at least they did the right thing but two and a half years, that was all a setup by Hillary Clinton and the Democrats and it caused us a lot of problems with Russia and others. But despite all of that, I think we accomplished as much as any president—or more—with the tax cuts. The biggest tax cuts in history, the biggest regulation cuts in history.” 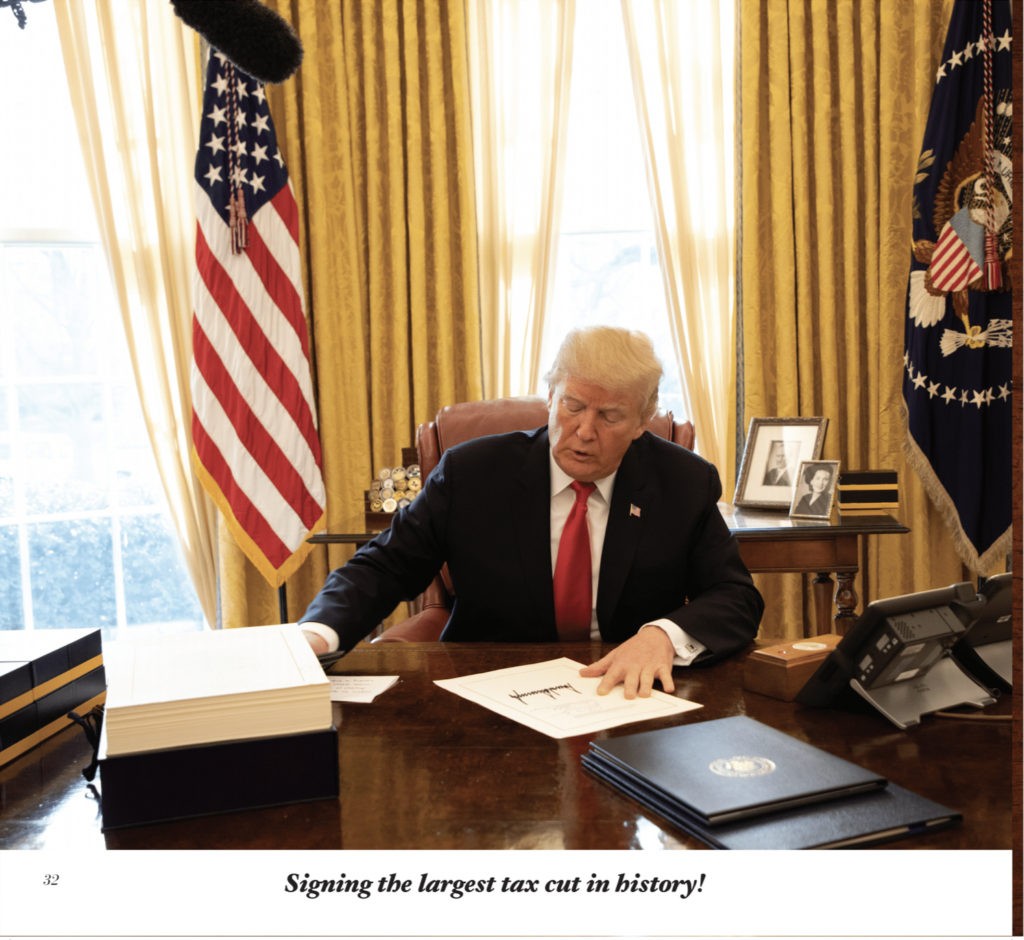 “We took care of our vets, we took care of our military, a 92 percent approval rating with our vets. All my life I’ve watched the vets just being decimated. At least once or twice a week on the nightly news you see stories about the vets and just how bad it is. You never saw that, you haven’t seen that in two or three years now—and it was a mess when we took over the VA. We got so many things approved for them. Number one, we were allowed to fire people who were horrible and didn’t get things done for them and were statists, and number two we were—if they were in line and couldn’t get things taken care of, we passed legislation that they would go out and would get themselves taken care of by a doctor and we would pay the bill. We had a 92 percent approval rating. So many different things—ANWR was such a big thing, energy independence was such a big thing. Now we are back to, you look at what’s happening—from $1.87 a gallon to now I just see in California it’s over $7 a gallon for gasoline for your car. It’s so sad to see what’s happened to our country. I must tell you the real thing in terms of bringing us down was the incompetence of the Afghan withdrawal, when we withdrew and gave them $85 billion worth of equipment. $85 billion—nobody knows what that even means, $85 billion. Then they have parades back and forth showing the equipment they got. They’re wearing our uniforms and they have everything, the goggles, the guns, the tanks, the planes. They have everything. We just left. So incompetent, and then the border where you have millions of people coming in. The fact is in one year you have a very different country than we had. That includes drugs. Drugs are coming now at a level that they’ve never come into the country before and a year ago they were at the lowest level they’ve been at in 40 years. I think that’s why the book is doing well, they’re looking a little bit to the past. It’s unfortunate in that way.”