Dutch politician, freedom of speech campaigner, and radical Islam critic Geert Wilders has spoken in an exclusive interview with Breitbart London, explaining his decision to broadcast cartoons of the Islamic prophet Mohammad on national television this weekend. 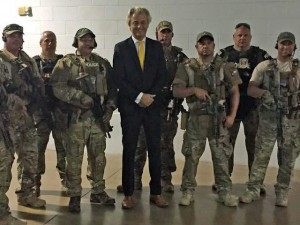 Geert Wilders stands with American armed police in Garland, Texas, only shortly before the convention centre used for the Draw Mohammad competition came under a failed assault by two armed terrorists / Twitter

Speaking to Breitbart London this week, Dutch Party for Freedom (PVV) leader Wilders said he was firm in his conviction to show cartoons of Mohammad on television, despite the extreme violence that has in the past been visited upon those who have already done so. Four months ago, 11 cartoonists, writers, and other staff at satirical publication Charlie Hebdo were murdered by Islamist terrorists in Paris, France. A ‘draw Mohammad’ competition attended by Wilders himself in Garland, Texas was targeted last month, although the only fatalities were the terrorists themselves after they encountered American security.

The Dutch government has already alerted their embassies around the world to prepare for protests and trouble in the aftermath of the cartoons being published, just as they had in 2006 after the Jyllands-Posten published cartoons of their own.

Noting that the Dutch parliament had already blocked him from showing cartoons in an exhibiton, Mr. Wilders remarked he was sure to get them on television – as he had a legal right to as a party leader. He told Breitbart London:

“Dutch television cannot stop us from showing the cartoons. Every party that is present in parliament has time to show themselves on national TV, and by law they cannot be prevented from broadcasting. Anyone can oppose the programme, but only afterwards but not before.

“It will be like a walk though a museum – I will present the viewer a selection of the cartoons myself – first I will explain why I want to show the cartoons, because of what happened in Garland, Texas, and explain that it is not a provocation.

“We should do exactly what it is terrorists want to stop us from doing – otherwise the message we send to terrorists is that violence and the threat of violence can be effective. And this cannot be the case… We should use the paper and pen to win over those who use guns”.

When asked whether every country in the Western world should have its own draw Mohammad competition, Wilders enthusiastically agreed – but qualified himself by making clear that drawing Mohammad is not a provocation – but a crucial act in showing terrorists that the West will not be cowed with the threat of violence. He said: “you should be able to depict Mohammad without a death sentence. We live in the West, not Saudi Arabia or Pakistan”.