Two planes that had just touched down on Sunday afternoon at Seattle-Tacoma International Airport were immediately isolated, reportedly due to multiple bomb threats.

A third plane,  a Delta Airlines flight originally scheduled to fly on Sunday afternoon from Los Angeles to Orlando, was diverted to Dallas due to “a security concern.” 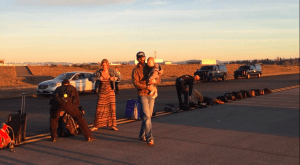 The second flight was Delta/SkyWest #4741 from Phoenix. The pilot said he had heard of three bomb threats, according to NorthWest Cable News reporter Jenna Luthman, who said the threats were described as having “low credibility.”

The Seattle Times reports that the last time a similar event occurred, when a plane was isolated from the rest of the fleet at Seattle-Tacoma International, was on September 11th, 2014.