Republican leaders and concerned parents spoke Tuesday about issues, such as remote learning and forced masking of children, that they believe are becoming increasingly detrimental to students’ academic development and mental health.

Education and Labor Committee ranking member Rep. Virginia Foxx (R-NC) opened the discussion, which took place at a roundtable in House Minority Leader Kevin McCarthy’s (R-CA) office at the U.S. Capitol, by highlighting what she perceived to be a “bureaucracy first, students last mentality” resulting in endless school closures in some parts of the country.

“Parents are fed up, and so am I. Parents are making their voices heard though,” Foxx said. “They are showing up at school board meetings and pushing back against the teachers’ unions keeping their children out of school. This parent revolution is signaling a new era in education.”

One activist parent from a suburb in Cook County, where Chicago is located, detailed during the roundtable the negative impacts she witnessed of school closures on her children.

“As far as virtual learning, I think it was really dystopian for our family,” Beth Feeley said. “I think there’s a lot of informal interaction that our kids missed out on in addition to the academics.”

Feeley added that despite coronavirus largely lacking in severity among children, “Now we have this mass testing. We’ve got forced masking of kids. … There’s a pressure to vaccinate young kids … and then there’s this constant threat of school closures. … I don’t think we’re teaching our kids resilience when we act like that.”

The Centers for Disease Control and Prevention (CDC) states that “rates of severe outcomes (e.g. hospitalization, mortality) from COVID-19 among children and adolescents are low,” suggesting protocols are primarily in place to prevent spread to adults.

Feeley continued with her concerns, “Overall, I think this has blunted our kids academic progress. It’s conditioned them to submit to these mitigations, and it’s really, I think, taught kids to be fearful and hopeless.”

Another parent of two boys in Baltimore County Public Schools named Ashley Smith spoke about her nine-year-old son with autism and severe developmental disabilities. “Children like my son are largely left out of the equation,” she said as she discussed her children being “forced to endure the disastrous experiment known as virtual learning” and how she believes her children are now academically behind as a result of it.

Banks, who leads the Republican Study Committee, applauded newly inaugurated Virginia Gov. Glenn Youngkin (R) as a sign of “hope” after Youngkin signed his first and second executive orders on day one of his governorship to end “the use of divisive concepts, including Critical Race Theory, in public education” and to terminate the forced masking of children.

“That’s exactly the type of leadership that Republicans are offering and promising when we take back the majority, that we will fight for our kids as well,” Banks said. “Parents are winning. I encourage parents everywhere to get involved … because it’s making a big difference and that’s the message we want to echo today.” 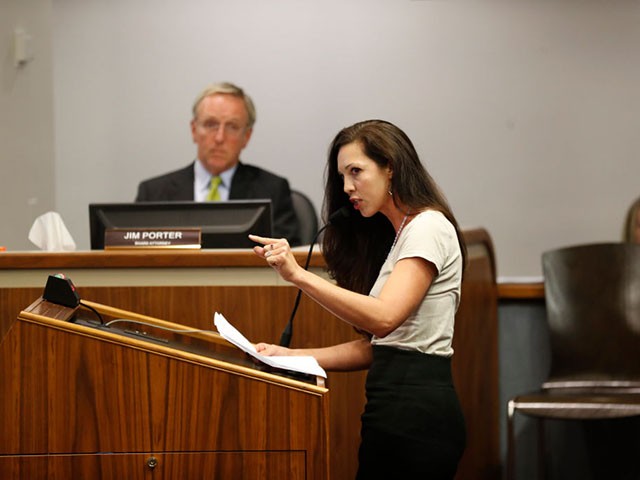 Opponents and supporters of mask mandates speak during public comments at a school board meeting on July 27, 2021, in Tampa, Florida. (Octavio Jones/Getty Images)

Comer, the ranking member on the Oversight Committee, noted the American Academy of Pediatrics declared in October 2021 a “national emergency in child and adolescent mental health” and that Oversight Committee Democrats and the Biden administration have been uncooperative after Republicans have requested three separate hearings over the past year pertaining to education.

Comer emphasized that this was undeniably because teachers’ unions, which have largely been dictating school opening protocols across the country, are inextricably tied to Democrats fundraising-wise.

The education discussion came as part of a series of three roundtables McCarthy is hosting this week to shed light on key issues — the other two being law and order and economic inflation — that Republicans believe Democrats, who currently have complete control in Washington, should be addressing.