The president of the USC College Republicans, Jacob Ellenhorn, has formally been asked to leave his position in the university’s student government. Those behind the push to remove Ellenhorn from his post are citing three violations, all of which are based upon his conservative activism on campus.

Ellenhorn was accused of violating USC’s “Principle of Community” by inviting Breitbart Tech editor Milo Yiannopoulos to campus to speak in an event that occurred last October. The official complaint accuses Ellenhorn of filming the event without permission, misrepresenting his title as a Student Senator, and of “bringing a speaker…that blatantly perpetuates sexism.”

There is an upcoming hearing that will determine Ellenhorn’s future with USC’s student government. A two-thirds student vote in the USC Senate could remove Ellenhorn from the body for the rest of the term. While he believes that his fellow students have his back, he believes it a possibility that some Senators will cave to the social pressure and vote to remove him from his position.

Ahead of the event the USC Shoah Foundation put out a statement which questioned if Yiannopoulos and his message were “suitable for [USC’s] campus,” given his proclivity for “anti-feminist and more broadly misogynistic commentary.”

Ellenhorn put out an official response to the calls for his resignation, where he firmly stated that he will “not be silenced” and claimed that he has been the target of “vicious anti-semitism.” He criticized the author of the official complaint, claiming that she has a “lack of interest in diversity of thought” and accused her of having a “blatant disregard for issues of free speech and freedom of expression.” 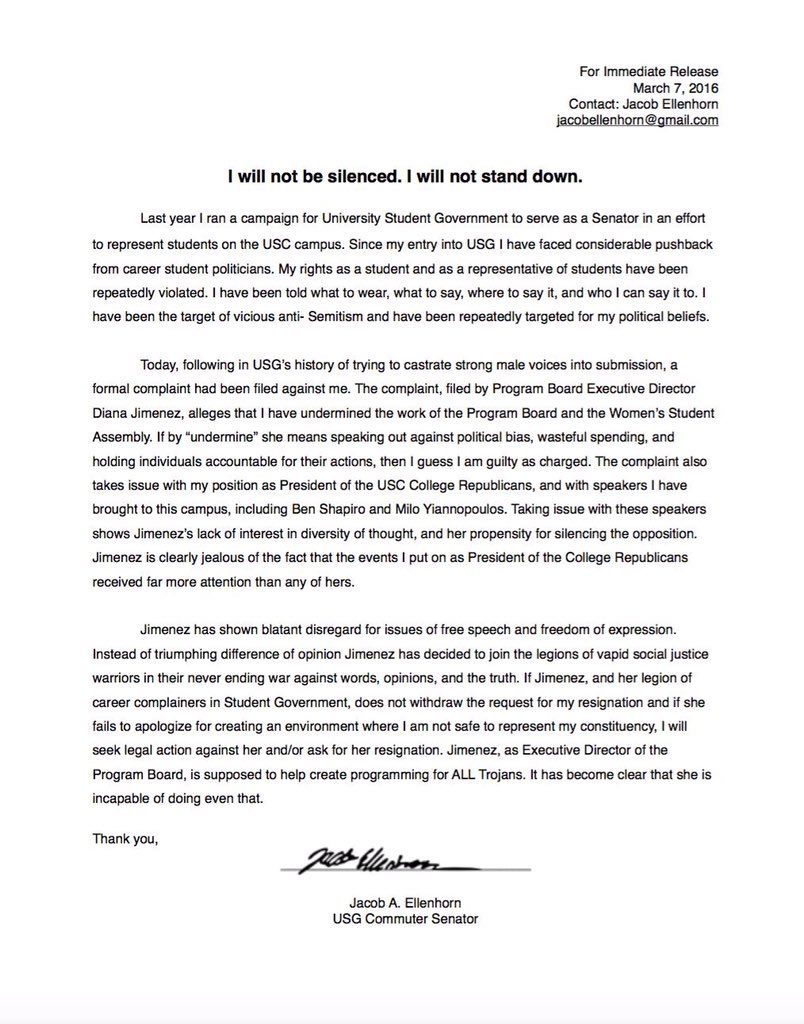 While the student responsible for the complaint maintains that Ellenhorn “has not behaved responsibility [sic]” and that his role as the president of the USC College Republicans has “created a hostile environments [sic] for our USC student body,” Ellenhorn remains seemingly unphased and plans to fight to remain involved with student government: “She can try to silence me, but she’s not going to win. I’m right and she’s wrong”.

Tom Ciccotta writes about Intellectual Diversity and Free Speech for Breitbart Tech. You can follow him on Twitter @tciccotta .