Thousands of Twitter accounts were hacked Tuesday night, resulting in anti-Netherlands tweets in Turkish spreading across the platform as users warned others to disable third-party app access to their accounts.

The majority of messages were posted in Turkish, featuring hashtags such as “#NaziHollanda” or “#Nazialmanya” (“Nazi Germany”). Users reported that hundreds of accounts were being hacked per second, posting pro-Erdogan tweets. The hackers’ message added, “This gives you a little #OttomanSlap,” and “see you on April 16,” which seems to refer to a Turkish referendum to give Turkish President Recep Tayyip Erdoğan more power scheduled for April 16.

Many high-profile and official accounts were affected in the hack including Forbes, Sprint CEO Marcelo Claure, the UK Department of Health, Reuters Japan, BBC North America, Duke University, and Amnesty International. Most of the account owners have since regained control of their hacked accounts and have deleted the rogue tweets. 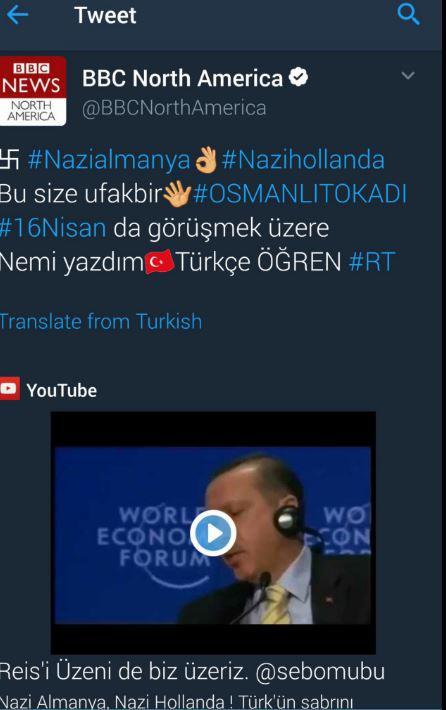 The source of the hack appears to be from pro-Erdogan, anti-Netherlands activists based on the content of the tweets posted. The Twitter third-party app Twitter Counter is believed to be the source of the hack, and the service sent multiple tweets from their account yesterday clarifying their involvement in the hack.

We're aware that our service was hacked and have started an investigation into the matter.We've already taken measures to contain such abuse

The Counter made it clear that they do not store users’ account details or passwords. However, the app does allow users to schedule and post tweets, which is likely the method used by hackers to spread their anti-Netherlands message.

One thing is important to note – we do not store users’ Twitter account credentials (passwords) nor credit card information.

The Twitter Counter application is blocked on Twitter. If this activity continues, then we strongly believe it's not just through us.

We identified an issue affecting a small number of users. Source was a 3rd party app and it has been resolved. No action needed by users.

Editor’s note: This story has been updated to correct the translation of one of the phrases in the hacked messages.