The death toll in China from the coronavirus outbreak rose sharply to 132 on Wednesday with nearly 1,500 new cases, renewing calls for Beijing to control the disease as U.S. officials said the White House was considering a ban on all flights to the country.

In a statement, China’s National Health Commission said as of midnight Tuesday, it had received nearly 1,459 new cases, increasing the total number of confirmed cases nationwide to 5,974. It reported an additional 9,239 suspected cases with nearly 60,000 others currently undergoing medical observation.

The White House is holding daily meetings on the outbreak and monitoring China-U.S. flights as a likely source of infections, sources briefed on the matter told Reuters, though it had decided against suspending air traffic on Tuesday.

New cases were also reported around the world, including Germany where four people from the same company were infected after one of them contracted it from a colleague while visiting their workplace in China.

Meanwhile, AP reports an airplane that a federal official said was evacuating as many as 240 Americans from Wuhan has now landed in the U.S.

The U.S. government chartered the flight to evacuate diplomats from infected area. The plane made a refueling stop in Alaska before flying on to Southern California, the U.S. Embassy in China has said.

Tuesday night, it was announced the plane would land at March Air Reserve Base in California’s Riverside County instead of at Ontario International Airport in neighboring San Bernardino County.

The UK government meanwhile is arranging to evacuate Britons from Wuhan and the surrounding Hubei province, with up to 300 British people thought to be in the area, according to the BBC. 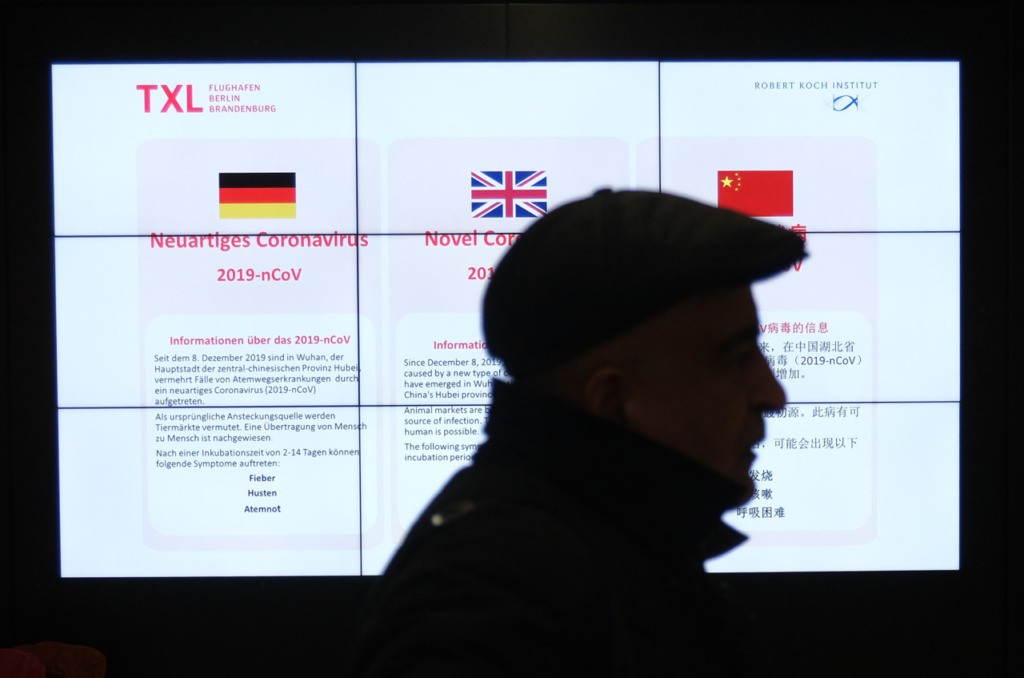 A monitor shows information regarding the new coronavirus at Tegel Airport on January 29, 2020 in Berlin, Germany. So far Germany has confirmed four cases of the virus, all in the state of Bavaria. The afflicted are all employees of Webasto, a German car roof manufacturer with manufacturing centers in China, who likely contracted the virus from a Chinese colleague. (Sean Gallup/Getty Images)

Australia plans to quarantine its 600 returning citizens for two weeks on Christmas Island – some 2,000km (1,200 miles) from the mainland.

Japan and E.U. countries are also repatriating their citizens and speeding up their departures from China as the number of international airlines ceasing links grows.

United Airlines has cancelled 24 U.S. flights to Beijing, Hong Kong and Shanghai between 1 and 8 February because of a sharp drop in demand.

Cathay Pacific said it would cut flights to China from 30 January to the end of March, while Air Canada has also reduced its number of flights.

Indonesia’s Lion Air said it would be temporarily suspending flights from Saturday, affecting dozens of flights on routes to 15 Chinese cities.

Russia’s Urals Airlines said it had suspended some services to Europe popular with Chinese tourists, including Paris and Rome, because of the outbreak.

Other airlines are introducing measures aimed at reducing the chances of spreading the virus.

Taiwan’s China Airlines said it was encouraging passengers to bring their own beverage bottles, while Singapore Airlines was among those allowing crew to wear masks on China flights.