As the surge of illegal aliens continues to mount in South Texas, Border Patrol agents in the Rio Grande Valley (RGV) Sector capped off a busy day by arresting one group of 86 illegal aliens and seizing more than $1 million worth of marijuana. Agents also carried out a rescue of an illegal alien lost in the brush and, unfortunately, recovered the remains of another migrant who was not as lucky. All of these incidents occurred in the RGV Sector on Monday.

Agents working out of the Weslaco Border Patrol Station observed a large group of people walking up a trail from the Rio Grande River in Hidalgo, Texas, Monday evening. The scene was reminiscent of the 2014 border surge when the illegal immigrants could be seen walking up from the river border by the dozens. The agents apprehended the group without incident.

Agents determined the number of people in the group to be 86, all of whom admitted to having crossed the border illegally.

After taking the migrants to the Weslaco station for processing, agents learned all 86 came from Guatemala. The group consisted of 36 adults and 50 juveniles. Of that, 32 of the adults were traveling with family members and four adults traveled alone. Thirty-four of the minors were traveling with an adult as part of a family unit, Border Patrol Supervisory Agent Marlene Castro told Breitbart Texas in an email response to a request for additional information. Sixteen of the minors were traveling as Unaccompanied Alien Children.

The day began for the RGV agents assigned to the Rio Grande City Station when they observed an SUV driving at a high rate of speed at about 1:30 Monday morning near the town of Los Arrieros, Texas. Agents pursued the vehicle which eventually crashed into a utility pole. The driver fled the scene but left behind 75 bundles of marijuana. Officials said the marijuana load weighed nearly 1,400 pounds and estimated the value to be in excess of $1 million. Agents turned the vehicle and drugs over to the Drug Enforcement Administration for investigation. 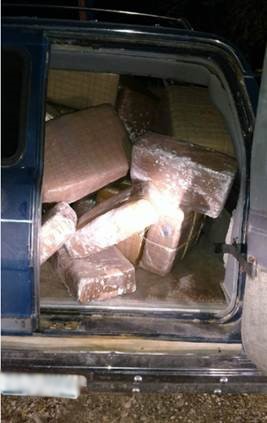 Later that morning, dispatchers from the Brooks County Sheriff’s Office received a call from an alien lost in the brush. Human smugglers frequently drop off their cargo south of the Falfurrias Border Patrol Checkpoint located in the middle of the county and lead them on a dangerous march through the ranch lands surrounding the checkpoint. Migrants frequently die when the smugglers leave them behind if they become injured or too weak to keep up.

Border Patrol agents went to the GPS location of the phone and found the man. Agents offered the man medical assistance but he declined. Officials did not indicate the man’s nationality.

Later that afternoon, agents assigned to the Kingsville Station received a call about an immigrant who was not as fortunate as the one in Brooks County. The Kenedy County Sheriff’s Office contacted Border Patrol dispatchers and advised them that a local rancher discovered the remains of a migrant who died after being abandoned in the area. Agents recovered the remains after a local justice of the peace declared the man to be dead. Agents found identification documents of a Honduran national near the body.

Despite the historically low number of border crossing this year, the numbers of illegal aliens dying while attempting to enter the U.S. is higher than last year, Breitbart Texas reported.