The first McDonald’s in Russia opened in 1990. The company announced on Monday that it is leaving the country and selling its Russian business following the invasion of Ukraine.

The company, which has 850 restaurants in Russia that employ 62,000 people, pointed to the humanitarian crisis caused by the war, saying holding on to its business in Russia “is no longer tenable, nor is it consistent with McDonald’s values.”

The Chicago-based fast food giant said in early March that it was temporarily closing its stores in Russia but would continue to pay its employees. Without naming a prospective Russian buyer, McDonald’s said Monday that it would seek one to hire its workers and pay them until the sale closes.

CEO Chris Kempczinski said the “dedication and loyalty to McDonald’s” of employees and hundreds of Russian suppliers made it a difficult decision to leave.

As it tries to sell its restaurants, McDonald’s said it plans to start removing golden arches and other symbols and signs with the company’s name. It said it will keep its trademarks in Russia. 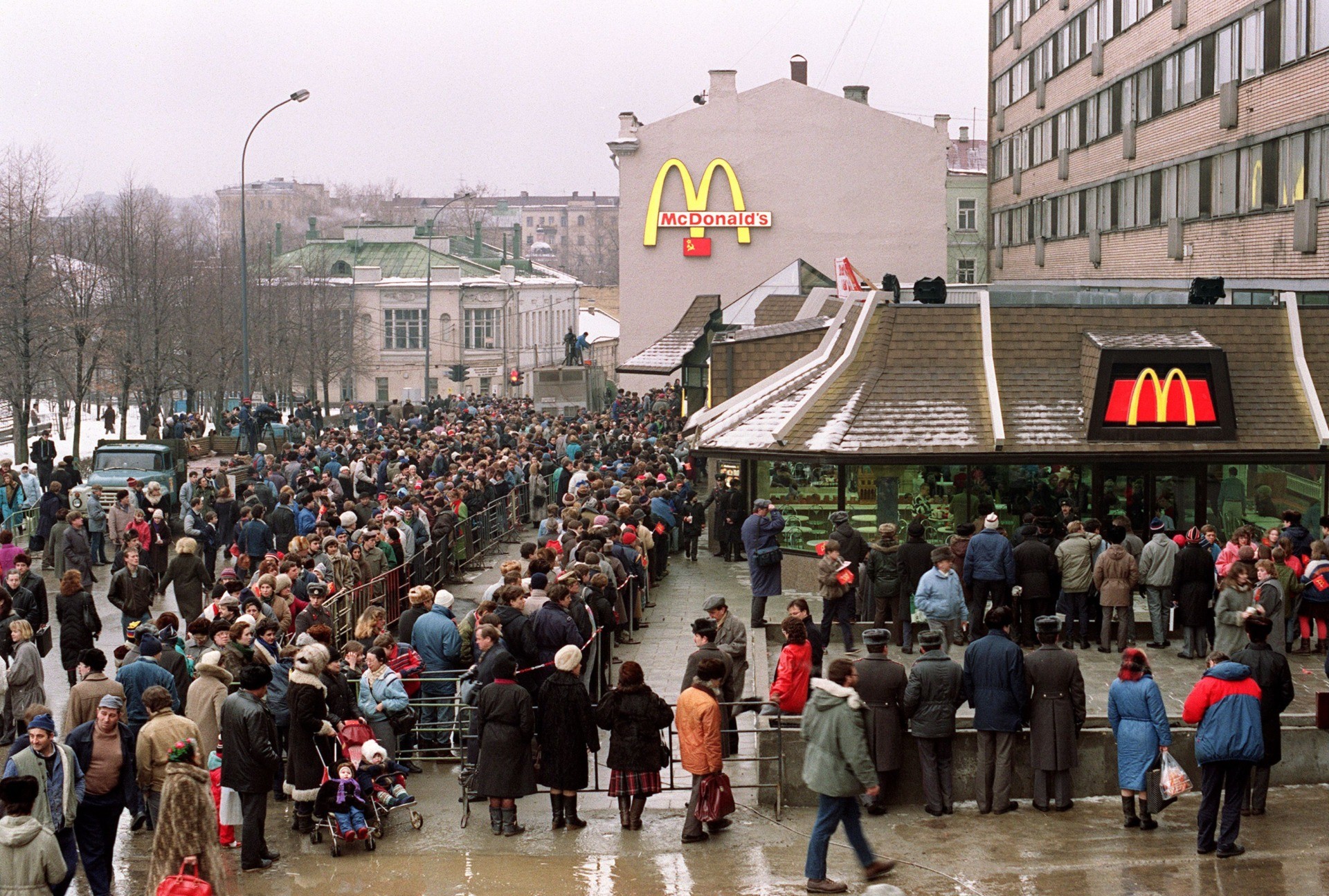 Soviet customers stand in line outside the just opened first McDonald’s in the Soviet Union on January 31, 1990 at Moscow’s Pushkin Square. (Photo by VITALY ARMAND/AFP via Getty Images)

Western companies have wrestled with extricating themselves from Russia, enduring the hit to their bottom lines from pausing or closing operations in the face of sanctions. Others have stayed in Russia at least partially, with some facing blowback.

French carmaker Renault said Monday that it would sell its majority stake in Russian car company Avtovaz and a factory in Moscow to the state — the first major nationalization of a foreign business since the war began.

For McDonald’s, its first restaurant in Russia opened in the middle of Moscow more than three decades ago, shortly after the fall of the Berlin Wall. It was a powerful symbol of the easing of Cold War tensions between the United States and Soviet Union, which would collapse in 1991.

Now, the company’s exit is proving symbolic of a new era, analysts say.

“Its departure represents a new isolationism in Russia, which must now look inward for investment and consumer brand development,” said Neil Saunders, managing director of GlobalData, a corporate analytics company. 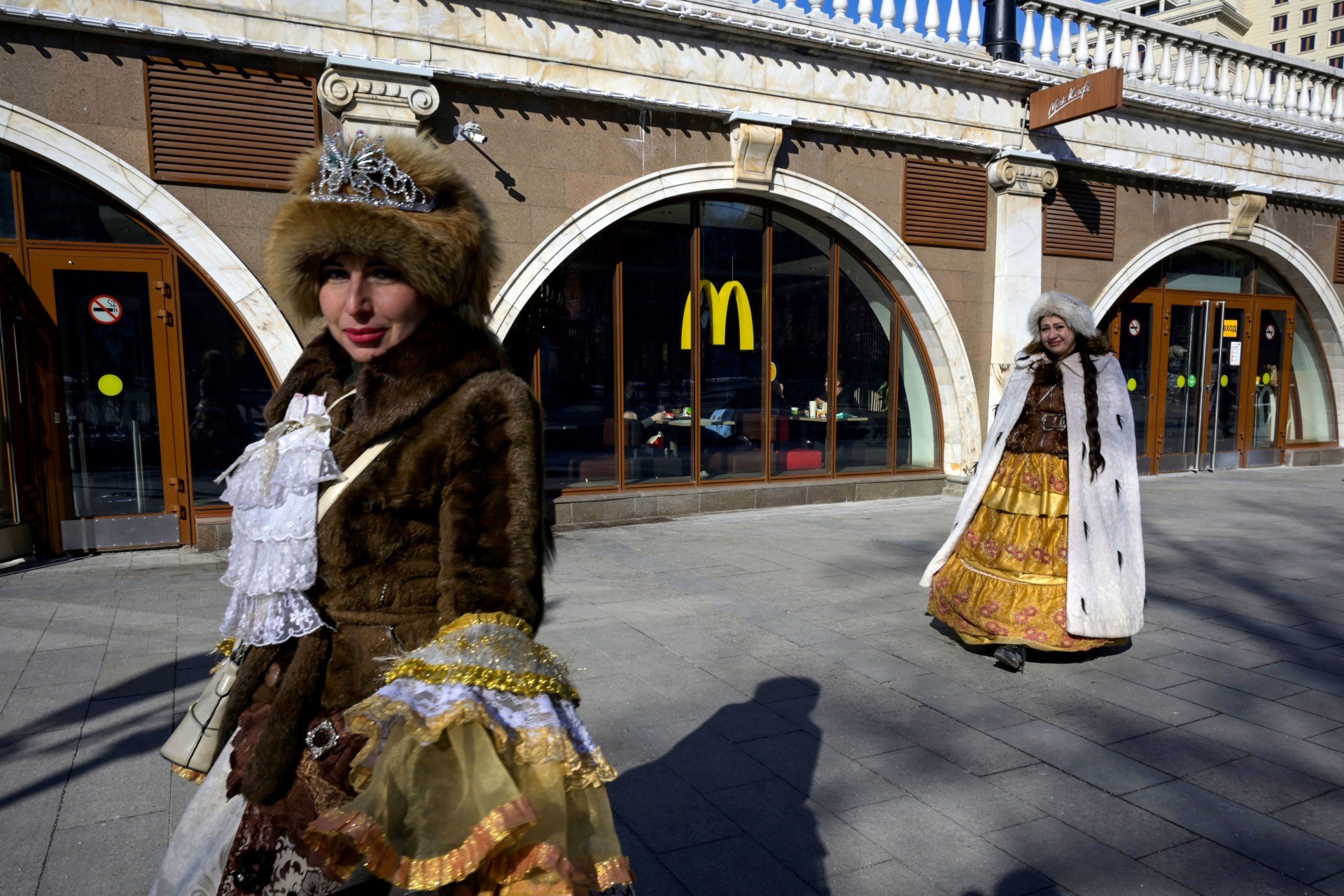 TOPSHOT – Women walk in front of a McDonald’s restaurant in central Moscow on March 9, 2022. – (Photo by AFP)

He said McDonald’s owns most of its restaurants in Russia, but because it won’t license its brand, the sale price likely won’t be close to the value of the business before the invasion. Russia and Ukraine combined accounted for about 9% of McDonald’s revenue and 3% of operating income before the war, Saunders said.

McDonald’s said it expects to record a charge against earnings of between $1.2 billion and $1.4 billion over leaving Russia.

Its restaurants in Ukraine are closed, but the company said it is continuing to pay full salaries for its employees there.

McDonald’s has more than 39,000 locations across more than 100 countries. Most are owned by franchisees — only about 5% are owned and operated by the company.

McDonald’s said exiting Russia will not change its forecast of adding a net 1,300 restaurants this year, which will contribute about 1.5% to companywide sales growth.

Last month, McDonald’s reported that it earned $1.1 billion in the first quarter, down from more than $1.5 billion a year earlier. Revenue was nearly $5.7 billion.